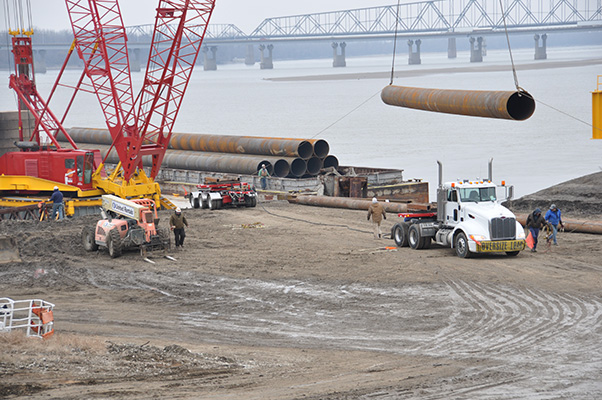 The problem confronting Trinity CEO Robert Griggs in 2002 was most worrisome: In business since 1979, he had reached the troublesome predicament of his company’s under-performance when measured against its peers.

This realization prompted several moves, among them, a thorough read of “The Great Game of Business,” focused on teaching employees to think and act like owners, using open-book management techniques developed by Jack Stack. And then came the lightbulb: Who knows the job of welding better than the welder? Who knows how to paint better than a painter?

And so, by implementing open book management, whereby the company’s financial books are opened for all to see, the employees each have a stake in the company’s earnings and share the profits and all have a say in what is needed to do a better job. In making this move, Trinity Products immediately realized results to its bottom line.

Today, the company is heralded not only for its ability to make the best steel pipe on the market, but is a model for other businesses needing to turn themselves around in a challenging economy.

Located near St. Louis, Mo., the $100 million company, producing small to huge pipes and other infrastructure components for bridges, buildings and even billboards, worked with Cycle of Success Institute (COSi), which helped Trinity bring employees into the fold through a system that identifies obstacles to productivity and then goes about solving them.

“We share all information, whether it is good or bad, and share profits by having people understand what should be the focus,” Griggs said. “We asked people, ‘How can we help you to do a better job?’ We continually prioritize. Some problems are quick hitters and some change form or might take a year or more to solve. In a bad economy there are things we can’t control. What we can control is getting better every day.”

Getting to the Core

To remodel its operation into a business for the 21st century, Trinity also operates with three core values. The first is customer service. “Without serving customers, none of us have jobs,” he said. “I’m shocked at the level of service in America today.” The second is serving employees through open book management and sharing profits. The third deals with continuous improvement every day.

With 175 employees at two Missouri locations, Trinity’s efforts have afforded its structural steel pipe products a view from virtually every piece of infrastructure ever invented, including sign poles, billboards, bollards, pilings, caissons, scoreboards, water handling, pipe struts and false work. Its steel casing pipe is used to protect various utility lines, such as water, gas and electric, from damage. Casing pipe can be coated or bare depending upon the application and can be manufactured to custom lengths according to requirements.

Steel pipe piling: Used when soil or ground conditions are not stable enough to support the weight of the structure being built.

Caissons/drilled shaft casings: Used when ground conditions require the use of pipe to hold back unstable soils or for water tight applications. Casing is predominately used to drill large diameter drilled shafts and can be installed using drill rigs or casing oscillators.

Hot roll/cold roll sheet pile: Cold-formed sheets are usually less expensive for a project by having a wider laying width, less costly method of manufacturing, higher strength to weight ratios and being a time saver with a reduced delivery time from order placement to jobsite. Hot roll creates an interlock that allows less free motion, improving performance in difficult driving conditions and where water flow must be restricted.

Connectors: Less expensive than fabricated corners which can take some time to produce and are usually available from stock with 24-hour delivery.

Trinity also produces sign poles, sign supports, and scoreboards, manufacturing these for arenas such as University of Missouri Football, University of Illinois Football, the LA Coliseum, as well as Daytona Speedway and Penn Station.

A selection of I-Beams, plates, bar, tubing and other structural components round out the company’s roster of products.

Other public venues where Trinity Products’ handiwork has enabled both functionality, support and aesthetic value, include the Goethels Bridge foundation work; the largest Ferris wheel in the world under construction at the Meadowlands in New Jersey – “Our omega beams were so large we couldn’t unload them on the dock, we built a trestle into the water to unload them,” Griggs recalled – reconstruction of a 100-year-old bridge in Maryland, and recently, two bridges on Long Island. The company also provided the slurry walls for One World Trade Center in New York City. In addition, Trinity was just awarded a bid to renovate Terminal B at LaGuardia Airport in New York.

And what happens to the scrap? Griggs is proud to point out that the steel industry was among the first recyclers. “Every piece of steel is turned around into scrap and back into steel. We recycle every ton of steel ever produced.”

Griggs remains hopeful that additional work is imminent with the Obama Administration’s recent passing of a needed transportation bill to concentrate on rebuilding the country’s bridges and infrastructure.

To spread its expertise to others, Trinity also offers a pipe school, through which attendees can earn 12 college credits. “Most customers are large construction companies – many don’t know how pipe steel is made,” Griggs said. “We hold a two-day seminar on how coils are made, as well as pipes and welding. We’re in our eighth year with this and recently had 75 customers from all over the U.S. attend.”

In its mission to always excel at production, Trinity has spent $6 million in the past five years on continuous improvement programs and this has paid off in significant time savings which, in turn, is passed along as cost savings to the customer.

“When we first started making pipes we did a coil splice in 30 minutes,” Griggs said. “Now we’re down to 15 minutes. We used to do a changeover in eight hours – now we do it in three hours. We have list after list of continuous improvement projects. It’s like R&D every day on how to do it better and faster.”

“We make more tons per hour than anyone in the industry,” Griggs pointed out. “We’re running at 16 tons an hour, depending on size. Five years ago we did 2,000 tons a month. We’re now at 4,000 tons a month – with the same people. We’ve made enormous strides.”

In other ways Trinity has been able to streamline business, through internet software that allows the customer to track shipments in real time. “It’s critical that when you’re shipping pipe to the site the customer knows when it’s arriving. The guy in the field will see every load shipped and doesn’t need to worry about when it will arrive.”

All of this activity at Trinity has furthered its long arm in an industry that continues to evolve in response to a change in infrastructure needs. “In five years our production has increased by 50 percent,” Griggs said. “Our quality department has improved. Everything we do for customers has improved.”