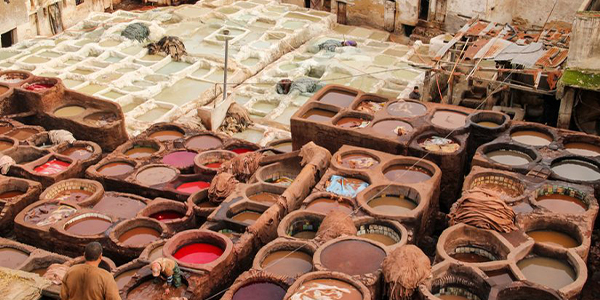 Not too many industries can trace their documentation to Classical Greece but the leather tanning process can claim as a noteworthy tie to the literary realm its mention in Homer’s The Iliad.

It is a fabric, of sorts, that has played an important role in our clothing development since prehistoric times. The ancient Greeks wore leather clothes, a fashion statement later adopted by the Romans. It is said that the first societies treated leather with products such as grease and bark extracts; the process was considered a secret art. In 1620 the English colonialists began adapting tanning methods to produce leather goods.

It is in this grand tradition that Irving Tanning Company carries on the process that has clothed civilizations for centuries, and in modern-day terms, this means supplying products for the fashionable and fashion-conscious. The company was founded by Polish immigrant Meyer Kirstein who, at age 13, left his country and took a job with Beggs & Cobb, the largest tannery of its time in Peabody, Mass. He had experience as a leather worker in Poland and was paid $3 a week, considered high wages at the outset of the 20th century. At the time more leather was manufactured in Peabody than all the rest of the U.S.
Kirstein, however, didn’t like the idea of working for someone else and began touring all the tanneries and collecting their leather scraps in a pushcart that he would take home and finish and then sell to local manufacturers of novelty leather items. He eventually started the Irving Tanning Company in 1925 in Salem, Mass. The company name was taken from the street on which he started his business.

In the meantime, the Depression was living up to its name in a town called Hartland, Maine, which had become a veritable economic ghost town after one of its largest companies, American Woolen Company, closed its doors. By some means, a group of people formed as a sort of economic development committee and contacted Kirstein to start a tannery in an old abandoned four-storied textile building and the Hartland tanning operation was born. By 1955 Irving Tanning was producing 1,500 sides per day and bursting at the seams, whereupon community citizens endorsed a bond issue that would raise sufficient funds to construct a new building, now named the Walter Sauer Building, that would house operations from soaking to shaving and would increase production capacity to 6,000 sides per day. Hartland residents and employees purchased many of the bonds and the Walter Sauer Building remains today the site of company operations.

In the ensuing decades the company operated under many different configurations, at one time falling under the ownership of Seagrave Corporation (manufacturer of the original Seagrave fire engines) and at another, encompassed tanning companies and operations around the globe. In its current arrangement, Irving Tanning operates in a 380,000-square-foot building, and has grown to become an $80 million company. Although Kirstein died in 1969, the people who next took the helm represented in every aspect his vision and business acumen. Irving Tanning has now become a premier tanning operation, providing a wide mix of leather to some of the most well-known handbag, shoe and accessory producers in the world; these include Coach Handbag, Wolverine, Timberland, H.H. Brown, Cole Haan, a subsidiary of Nike, and San Antonio Shoe. The company also produces leather used to produce boots and shoes for the military.

Side orders
The process by which cattle sides are made into fine leather begins with Tyson Fresh Meats Inc., a division of Tyson and formerly Iowa Beef Packers, which not only supplies beef and pork but also allied products, such as tanned hides used to make leather. Explains Vice President of Operations Paul Larochelle, after receiving the raw sides from Tyson, the company sorts by weight, grade, good, medium, poor, heavy and light depending on the eventual end-use of the leather, whether that be a handbag or men’s shoes. The portion of the side called a bottom drop split is sold for accessories such as work gloves and belts; the grain side is shaved for uniform consistency and thickness and then goes through retanning and color processing. “The side actually goes through an initial tanning process,” Larochelle explains. “Once it’s taken off the cattle it is preserved by removing flesh, hairs, oils, etc. In the color process we do a quick retanning. “Irving Tanning, he adds, buys sides “by the pound, processes these through the factory by the piece and sells them by the square foot.” The company processes between 21-22 million feet annually.

Advances in leather
Known globally as a company that leads the way in research and development of new textures and colors for leather, Irving Tanning last year developed a leather product that made the industry stand up and take notice. Called Nimbus, the product is described by Steve Slymon, senior vice president of sales and marketing, as having a “specific lightness and translucence of color. It develops color well and is very soft and is versatile in terms of use. It can go into a moccasin or into a woman’s comfort boot.”

Other new leather varieties produced by Irving Tanning include:
• Razor, embossing and milling give it a waxy and self-polished look, for casual and outdoor footwear;
• Solo Mio, a rich top grain that reveals a burst of pull up underneath, for all styles of casual and outdoor product;
• Casa Mia, an embossed leather that is buffed to reveal bright color on top and darker color beneath for all types of casual outdoor and western boot applications;
• Atlantis, a waterproof version of Nimbus, described as being “soft as a cloud and light as one,” and available in waterproof;
• K-3, a waterproof self-lined flesh out leather enhanced by an embossing with a frosted antiqued look;
• MegaTraction, described as a soft and supple waterproof leather with a crushed grain, for work and outdoors;
• Soapstone, enhanced by a crushed grain for all types of outdoor and casual footwear with low moisture absorption and good moisture vapor transfer.

Additionally, twice a year Irving Tanning presents what it describes as “color stories” – the latest in leather coloring – to its fashion forward customers. What’s hot could depend on a range of variables, but usually centers on the prevailing fashion trend of the season. For example, notes Slymon, if a particular season is punctuated with a lot of denim, Irving Tanning would accommodate that with like colors; the development of color can also be significantly fine-tuned and follow, say, a particular stitching in a pair of jeans. “There’s little nuances from year to year that cause the color to change,” says Slymon. Forty years ago, leather came in your basic black, white and brown – a far cry from this year’s Mack Red, Husk, Ratz and Oakmold offered by the company – but the industry began to change dramatically as shoes and accompanying accessories suddenly were awash in innovative color 25 to 30 years ago. The trend toward designer sneakers also has driven the industry toward more vibrant color and lately, the retro look has been dictating fashion. “It wouldn’t surprise me if someone called to ask for a color that was on the ’58 Buick,” Slymon notes.

Standard-bearers
To further process top-grade leather products, Irving Leather adheres to strict standards for leather assessment known as SATRASumm, developed as a common standard to better understand the cuttability of leathers. SATRASumm is a world wide accepted standard for leather assessment. Since it’s inception some 20 years ago SATRA has been widely accepted for setting and achieving goals of leather utilization.

Irving Tanning has three full time certified assessors on staff, and because of its SATRA training and certification the company has the knowledge to better understand customers’ needs.

Irving also is an environmentally responsible company and the latest in its long list of achieving environmental recognition was as a participant in the EPA’s 33/50 program to reduce toxic chemical releases. This resulted in a reduction of 83 percent in 1997; the company has remained in the 81-83 percent range while production levels have increased by 46 percent or better.

Production-wise, the company has further streamlined its operation to better compete domestically and with Asian producers (currently, Slymon notes, 80 percent of leather produced at Irving is shipped to China). “We can compete globally through innovation, service and responsiveness,” he adds. “We had planned on competing with the Asians and learned that we needed to be better.” The company launched a strategic plan to reduce manufacturing time and to overall streamline its operations, which have acted to shave days off of its process schedule.

Hand-in-hand with a more efficient operation is the dedication and exuberance of the people who work to make sure Irving Tanning retains its name as a top supplier of leather products. “I have been all over the country and the work ethic of people here is unmatched,” Slymon notes. “The interest they show in their work translates into a better product.”