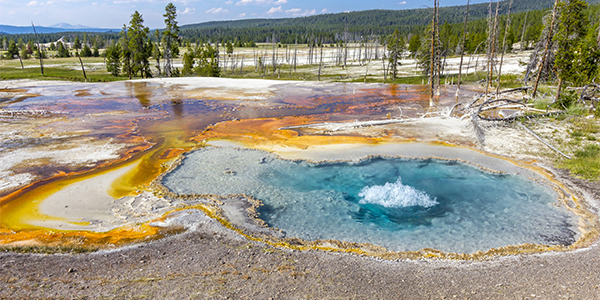 The people in Wyoming would like the rest of the country to know a few things. Yes, there are only 496,000 people in the whole state and, yes, it is pretty big. Statistically speaking, Wyoming encompasses 97,100 square miles and averages 5.1 people per square mile, compared to the U.S. average of 79.6 people per square mile.But, as Wyoming officials are quick to point out, these aren’t the days of Lewis and Clark. While the Indians have left their cultural mark on the state’s history, you won’t be dependent on them for, say, your very survival. And that, perhaps, is one of the main messages the people in Wyoming want to stress to, well, those who aren’t quite used to the expanse of prairie.

“People tend to be a little afraid because we have wide open vistas,” notes Tucker Fagan CEO of the Wyoming Business Council. “We have to assure them, yes, we have cell coverage and you won’t get stuck somewhere with no resources.”

Connectivity aside, while the Southwest quadrant and its major centers of Kemmerer, Rock Springs, Green River, Afton and Evanston offer vistas that are expansive and breathtaking – as well as recreational activities that make the region an outdoorsman’s dream – it also offers many unique hometown cultures that invoke simpler times. But don’t let the quiet ambience fool you. Southwest Wyoming has brought itself into the 21st century, offering state-of-the-art conveniences combined with an economy that won’t overburden the checkbook.

“There is no income tax, no corporate tax,” Fagan stresses. “In addition, this region is centrally located to major railroads and interstates. It offers many advantages to people who want to relocate and live in a place that is like a small town. Business people can move here and have a solid bottom line and they will come to know the people they are dealing with. I can go into every town and know the mayor, the representatives, the business owners.”

Within the region, there have been many positive changes in the last several years, relates Ray Sarcletti, Southwest Regional Director for the Wyoming Business Council. Among these is the location of a $30 million facility by Halliburton, which the company claims is its first major capital investment in the continental U.S. in 25 years. Methane production, along with natural gas and coal bed operations should be producing for a long time to come, Sarcletti notes, adding that further exploration has been encouraged in line with a growing demand for natural gas as an energy source. Southwest Wyoming is also home to two major power plants: Pacific Power & Light’s Naughton plant in Kemmerer and Jim Bridger Power Plant, just east of Rock Springs.

Say “cheese”
Among the businesses that have helped to shape the region is the Star Valley Cheese Factory, one of the oldest and most viable. Located in the town of Thayne, it was founded by a co-op of farmers to market milk and cheese; in its current configuration, Star Valley makes provolone and mozzarella products sold under private label as well as its own: Messana mozzarella brand and Bell provolone. The products are sold in supermarkets from California to the East Coast. “ We process probably about 15 million pounds annually,” notes Plant Manager Frank Dana. “We contract with local farmers who deliver the milk to us.”

As the factory itself has changed in the 56 years it has been in business – with use of automation replacing labor for the most part – Star Valley has witnessed a few changes within its region; but, fortunately for the businesses, much has stayed the same. “The biggest advantage is not having a state tax,” Dana notes, “and electrical costs are lower than the rest of the U.S. This is a good lifestyle and a good place to raise a family.”

Household staple
Also operating a factory in this area is Church & Dwight, the world’s leading producer of sodium bicarbonate, popularly known as baking soda and an ingredient in myriad products, from toothpaste to deodorization products, as well as the popular Arm & Hammer laundry detergent. The company’s 300,000-square-foot Green River plant has been operational since 1968 and was strategically sited next to its supply source – General Chemical, miners of soda ash – which is literally a stone’s throw away.

One of the nation’s oldest manufacturing companies, Church & Dwight was founded in 1846 by Dr. Austin Church, a New York physician, and his brother-in-law, John Dwight. When Church’s son, James, joined his father in 1867 he brought along the Arm & hammer trademark.

The Church & Dwight facility, says Plant Manager Paul Parker, while being conveniently located adjacent its raw materials source, is also close to major transportation arteries, including I-80. Other advantages to its Southwest Wyoming location, notes Parker, is a loyal workforce and easy lifestyle. “I like the workforce here,” he says, “they’re very hardy. And there’s a lot of recreational activities, which people like.”

“I was born in West Virginia and raised in Louisiana and I think what I like best about this area is the seclusion,” Moneyhun says. “It’s not overpopulated, there are no traffic problems, no state tax and it seems we don’t have the weather problems – the tornadoes, hurricanes and flooding – that occur in other areas of the country. When I go on vacation I see pretty sights but I still think we have a better lifestyle here.”

As presiding officer at Polyguard, producer of a range of burial vaults, Lee Schwab believes above all it is the small town aspect of daily life that is the most attractive part of doing business in southwest Wyoming.

The Schwab family had been intimately involved in the town since the Depression era, when Schwab’s great-grandfather, a funeral director, went into business. As with other industries, there is always a need for better products and Lee Schwab, the fourth generation business owner, realized burial vaults constructed of non-biodegradeable, water and chemical resistant ABS polymer were more durable. Schwab created the Polyguard & Company, LLC product line in 1985.

“I think low taxes and an employee base that is hardworking make this area good for businesses,” Schwab notes. “We’re basically a small town culture – we’re surrounded by national forests and everyone here enjoys the outdoors. When I go downtown generally there is no one I see that I don’t know. Everything that the West has to offer is here and that’s what we love.”