Product recalls are increasing in size and number, predominantly driven by the increasing complexity of global supply chains and concentration of certain components or ingredients on a smaller number of suppliers, as well as tougher regulation.

Many manufacturers are sourcing their components, ingredients or raw materials from fewer suppliers, as supply chains become leaner and more global. This has seen huge increases in values at risk and the emergence of a ripple effect, where a single recall can impact numerous manufacturers, brands and countries, causing reputational damage and large financial losses.

In response to a number of high-profile recalls and rising consumer expectation around product quality and safety, regulatory scrutiny has been increasing around the world. Many countries have implemented stricter product safety laws (see graphic). 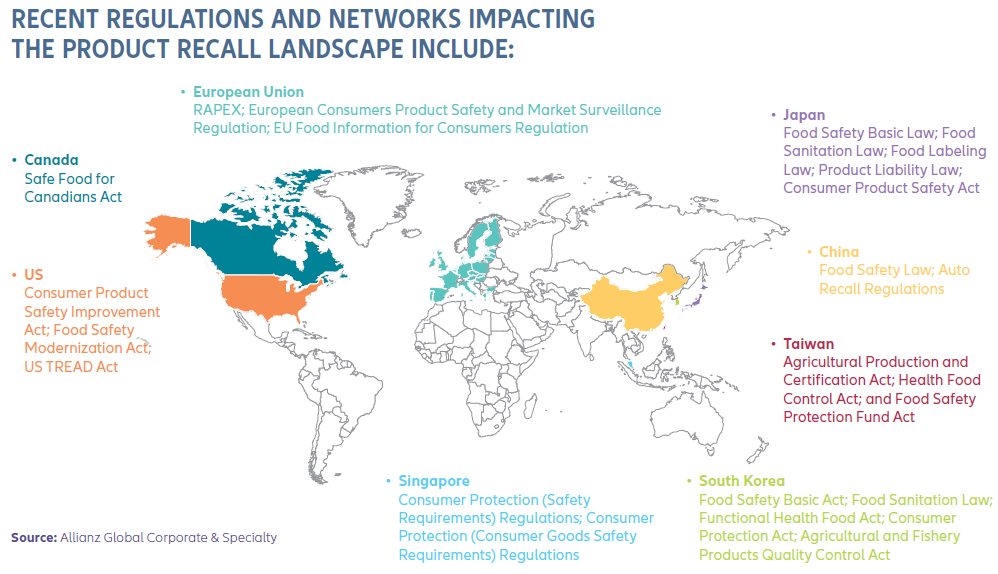 Authorities are now far more proactive, particularly in the food sector. Following a number of fatal outbreaks in the US, the Food Safety Modernization Act (FSMA), signed into law in 2011, has resulted in the most sweeping reform of food safety laws in more than 70 years. It sees a big shift in regulatory focus – from reaction to prevention – giving the US Food and Drug Administration (FDA) greater powers to investigate and order recalls.

During 2016, a number of major food recalls were sparked by undeclared allergens and bacterial contamination (in particular listeria, but also E. coli and salmonella). For example, listeria found in soft cheeses, frozen vegetables, ice cream, apples and cantaloupes have all caused large recalls in the US in recent years.

Undeclared allergen recalls (typically involving nuts, milk, wheat and soy) are often a result of a simple manufacturing error, such as mislabeling, mispackaging or unintentional crosscontamination. But they can also be the result of food fraud.

Economic pressures continue to bite across many sectors, putting a growing number of companies and supply chains under pressure. In some cases this is leading to increasing risk of human error and criminal activity. Tougher trading conditions can lead to companies sourcing cheaper suppliers or cutting back on experienced personnel. It can also tempt individuals into acts of fraud, such as using inferior or cheaper ingredients or components.

Food fraud, including economic adulteration and counterfeiting, is a growing risk. And from olive oil to wine, to honey to cinnamon, it is big business. Organized crime groups mix foods with cheaper ingredients or sell inferior products as genuine. At the same time some businesses can be tempted to commit fraud by the need to boost profits.

The trend for shorter product development cycles means less time to test products or to fully understand the health implications of new materials and ingredients. For example, the use of Bisphenol A (BPA) in food packaging was not an issue 10 years ago. Today, there are questions over its potential impact on human health and the environment.

Non-safety recalls can involve the use of child or slave labor during production, issues around labeling, food fraud and religious or ethical designations, like halal or vegan food. When consumer expectations are not met in such areas, companies often feel obliged to recall products in order to protect their reputations.

UK and US retailers withdrew food products after media reports revealed that certain fish products could be traced back to boats using slave labor in Asia. In 2015, US and European confectionary companies were accused of using cocoa produced with child labor.

Social media is a double-edged sword when it comes to recalls. It can be a fast and effective way of communicating with customers, help early identification of issues and aid restoring brand and reputation following an incident.

However, it can also exacerbate product recall risk if it is not well managed and can be used as an outlet for disgruntled customers and groups.

Bad news travels fast and a situation can rapidly escalate and become out of control. Even a relatively small recall can become a major crisis. Social media channels can quickly spread false or fraudulent information, which can be detrimental to a company’s brand.

7. Growth of product recalls in Asia

Products from Asia continue to account for a disproportionate number of recalls in the US and Europe, reflecting the eastwards shift in global supply chains and historically weaker product quality controls in a number of countries across the region.

According to the US-China Economic and Security Review Commission, Chinese goods accounted for 23% of all goods in the US in 2014, but represented 51% of all product safety recalls. Meanwhile, China’s share of US toy recalls rose from 10% in 1988 to 98% in 2007. In 2015 China accounted for 2,124 product recall cases in the US, compared with 685 from US companies. The country also accounted for 62% of the product safety alerts issued by the European Union in 2015.

8. Technology and innovation to drive risks

Manufacturing plants are now mostly automated. And while automation should increase efficiency and reduce human error, it also introduces the risk of a cyber-attack. Motivated by extortion or malicious intent, hackers could theoretically change or contaminate a product at the point of manufacture by controlling machinery or changing processes.

Technology itself is likely to become a bigger driver of product recalls in the future, whether it’s recalls around cyber security or the introduction of innovative but untested advances, such as artificial intelligence, nanotechnology or biotechnology.

In August 2017, the FDA ordered a recall of almost 500,000 pacemakers in the US to patch cyber security vulnerabilities.

Recalls involving emerging technologies are also likely to be even larger and more complex than today. Widespread introduction of autonomous driving in future is likely to see a shift in liability from individuals to product manufacturers, a move that could potentially see an increase in recall risk. If a series of accidents raises safety concerns for the artificial intelligence technology behind driverless cars, it could trigger a massive recall. 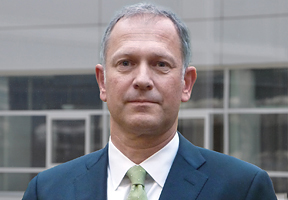 About the Author
Christof Bentele is Head of Global Crisis Management at Allianz Global Corporate & Specialty, based in London. He is recognized as one of the leading experts globally on Product Recall & Contamination, Kidnap & Ransom, Emergency Evacuation, Terrorism and Political Violence.

During his almost 30 years in the industry he has worked for reinsurers and insurers, brokers and reinsurance brokers in New York, Cologne, Frankfurt, Mulheim, Hamburg, Dubai, and London.

Before joining AGCS in 2014, Christof worked as the Chief Broking Officer at JLT Towers Re, and a Chief Broking Officer for 12 years at Aon Crisis Management. Prior to that, he spent time building AIGs crisis management business in Germany and Central Europe as well as spearheading the consulting firm Aon Giuliani Protocol in Europe.

Christof is a graduate of Kellogg Institute, Insead Fontainebleau and several German universities.