These approaches are almost always ineffective. What’s worse, they often backfire and make the situation worse, as was the case with CEO of Equifax Richard Smith’s communication about their massive data breach. While these problems look obvious to us in hindsight, why are these responses so hard to get right? And what can companies do to apply the lessons of past failures to the next crisis they face?

The heat of the moment

Surely Equifax believed they had a thoughtful communications plan in place for this breach after planning to announce publicly for weeks. What they did not realize was that three crucial elements stood in their way.

Emotion. Crises are often personal, especially when companies or CEOs feel like they are being attacked. The natural reaction is to Delay, Deny, Defend. Delay—because you feel you shouldn’t have to respond or don’t yet have all the information. Deny—because the accusation either isn’t true or feels like a manipulation. Defend—when those fail, all that seems to be left is a counterattack. Emotion leads to messages that vent or make the company feel good, but are ultimately ineffective with outside audiences.

Protection. In a crisis, lawyers (much like doctors) operate to “first, do no harm.” If they could, many lawyers would have the company respond to a crisis by saying nothing at all. And often, the corporate-speak that results from an over-lawyered statement is designed to say nothing. The instinct is to avoid the risk of saying something that makes things worse. The reality is that small crises often become big ones when companies prove they are tone-deaf in how they respond.

Over-engineering. Every statement needs to be accurate. But technical experts, including scientists and policy wonks, often have a different issue. They’re very much in the weeds. A well-articulated message in their hands can turn into jargon-filled nonsense to outside stakeholders.

It’s difficult to overcome these corporate instincts. Communicators often watch these debates in frustration, but without hard data to show that a different approach works better.

Over the last two years, my firm, together with Procter & Gamble, set out to find that data. We analyzed all of the academic literature on crisis messaging. Then our firm went back and looked at the testing results of thousands of messages developed in 15 years of crisis and issue message testing. We found clear patterns and identified new approaches to diagnosing the key elements, developed a set of frameworks that apply in different situations, and cataloged hundreds of message fragments, words and phrases that can be used to help build more effective responses.

Below is what the tool would have helped communicators accomplish as opposed to what Richard Smith actually said. Most specifically, it would have drastically improved addressing the audience’s point of view. 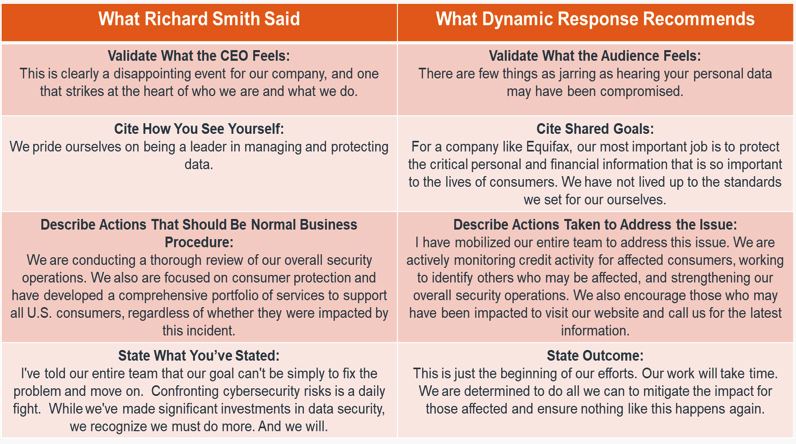 A smart executive would never make a large change or launch a campaign based solely on their gut, but even the savviest CEOs take that tact when dealing with a potential public-facing fiasco. Had Smith resisted corporate instincts and instead taken a more data-driven, analytical approach to what to say, he would have avoided looking tone deaf, which fueled the flames of this major crisis and further tarnished his company’s reputation. To learn more about Dynamic Response, go to maslansky + partners.