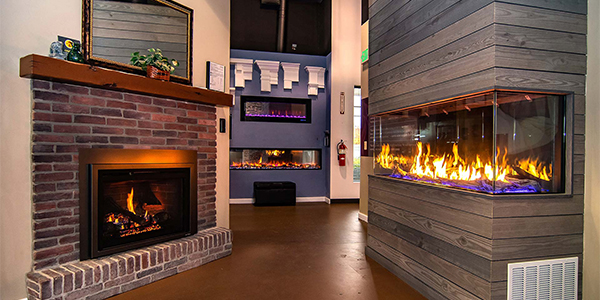 For the last eight decades, the role of the fireplace in the American home has been evolving, and Heatilator, the industry-leading brand, sold by Hearth & Home Technologies, has been evolving along with it.

“The market is shifting, and one of the primary reasons that it’s shifting from wood-burning to gas is for convenience,” said Kathy Repp, the brand manager for Heatilator, which is produced in Mount Pleasant, Iowa. One of its most successful lines is the Caliber series, with models that produce generous amounts of heat and may be operated with a simple flip of a switch. Additionally, the Caliber is one of many Heatilator Direct Ventilation systems, which use a sealed combustion chamber to preserve indoor air quality and prevent negative air pressure issues.

Repp said that Heatilator is successfully modeling two different types of gas fireplaces – those that are sealed such as the one previously mentioned, or those that can be opened by the homeowner – but the direct vent style is increasingly popular with homebuilders because it is not necessary to terminate it through the roof. Rather, it can terminate horizontally through a sidewall, offering more placement opportunities throughout the home.

Another cause for the shift to gas is environmental emissions laws. Most recently, several states or regions that experience significant problems with smog have begun to ban traditional woodburning fireplaces altogether, and that has created a new opportunity for Heatilator to market its gas fireplaces.

Industry firsts
Recently, the Heatilator brand began marketing its Reveal gas fireplace, which seeks to offer homeowners the aesthetics of a traditional, open-hearth woodburning fireplace without the fixed glass panel that would separate them from the fire. With a multi-colored, stone-like interior refractory lining that is available in traditional or herringbone patterns, the Reveal fireplace mixes convenience with the conventional look of a traditional woodburning fireplace.

Heatilator’s history of value and dependability dates all the way back to 1927, the year that it invented the concept of the manufactured fireplace. The very first model was made in Syracuse, N.Y. Over the years, the Heatilator brand would be responsible for a number of firsts.

One of the most important of these came in 1946, as millions of veterans were returning from World War II to inaugurate a housing boom in America. Heatilator launched a factory-built fireplace system that completely eliminated the need for masonry-style construction for the very first time. Another industry innovation, the Uni-Bilt model, was rolled out in 1955 and was the very first model to allow zero-clearance installation, meaning combustion materials could be constructed right up to the firebox. Other key models included the Mark 123, a masonry-form style that was introduced in 1968. Today, Heatilator holds some 25 patents.

Working with America’s largest homebuilders, the new Heatilator models, less expensive and easier to install, became a staple of the post-war suburban building boom in America. Today, Heatilator is by far the industry leader. According to one survey that was conducted in 2006, 39 percent of all homebuilders use Heatilator products. Among the top national builders, Repp said, Heatilator today has a 45 percent market share.

The move to Iowa
The company also went through a number of significant corporate changes over the years, relocating its main manufacturing plant to Mt. Pleasant, Iowa, in 1964. Today, more than 500 employees work at the 300,000-square-foot plant. After a series of ownership changes, the company was purchased in 1981 by HON Industries and now is part of the Minneapolis-based Hearth & Home Technologies, subsidiary of HNI Corporation.

Hearth & Home Technologies is the world’s leading manufacturer of hearth products, including gas fireplaces, electric fireplaces and woodburning fireplaces. In addition to Heatilator it markets under the well-known brand names of Heat & Glo™ and Quadrafire®.

Repp said that about 90 percent of the Heatilator brand’s sales are to homebuilders for new construction, marketing its products through trade shows and advertising in key industry publications. Because of the housing boom that has taken place for much of the current decade, fueled by record-low interest rates, and the fact that the products under the Heatilator brand set the industry standard for value and dependability, Heatilator has enjoyed many good years.

“In fact, 2005 was a record year for us,” Repp noted, adding that “2006 was something of a challenge” as the market cooled slightly. She said that Heatilator is expecting a mixed-to-sluggish housing market to carry over through 2007, although the brand is looking to exploit its most recent new product innovations. It helps, Repp added, that the slowdown has not been uniform across-the-board, with some markets like California continuing to be active for much of last year even as the East Coast sagged.

One thing that Heatilator has done in the effort to increase its market share is to design innovative new models that can be better integrated into today’s home, including an Eclipse Hearth System that offers an integrated hearth system which incorporates the direct vent fireplace, ON/OFF control, pre-cast surround, and venting components. Repp said that the company recently made a big commitment to this project with significant capital investments to manufacture the Eclipse series.

A leader in R&D
Recent Heatilator innovations, including the Icon Woodburning Series, have been honored with a Vesta® Award, which recognizes innovation in technology and aesthetic design, at the industry’s leading trade show. The Icon series offers the industry’s largest woodburning fireplace, with a unique design that allows finishing materials to be applied right up to the edge of the firebox opening so there is no visible black steel. Said Repp: “One of the trends homeowners are demanding is more of a cleanface appearance.”

Heatilator reinvests approximately 2 percent of its budget on research and development, according to Repp, with about 20 employees focusing on the aesthetic and technological design of the product. She said they are supported by cross-functional teams that incorporate members from the manufacturing floor, marketing, and sales as well as feedback from consumers and channel partners.

Repp said that many of Heatilator’s recent marketing efforts have been geared at both homebuilders and buyers in the entry-level housing market, to convince them of the importance of having a fireplace. “The incidence rate has been declining, specifically within the entry-level market, and we see a lot of the time the consumer has very little influence of the process,” she explained. As a result, the company’s efforts are geared toward showing the increased value that a fireplace brings to a home, especially when it is re-sold.

Indeed, the American home had changed a lot over the last 80 years. What hasn’t changed is Heatilator’s commitment to offering the best fireplace experience, at the best value.