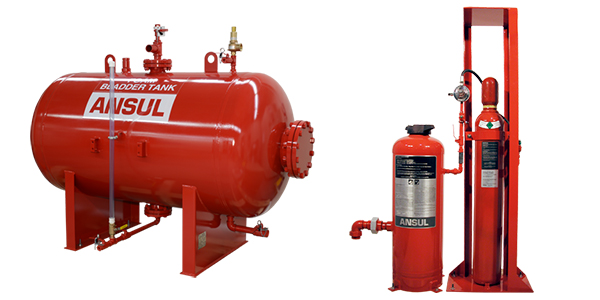 The bright red fire extinguisher that sends a burst of carbon dioxide at an electrical fire. The chemical blast that firefighters aim at a gasoline-based fire. The blanket of foam that is pumped on an airport runway for an emergency escape path. The Class A foam that drifts from a plane over a forest fire. All of these products have one objective – to stop fire. And that objective has been business of Ansul Incorporated since 1939.

This worldwide enterprise was started in 1912 as an offshoot of Wisconsin’s logging industry, as a company that made cattle feed partly from sawdust. In 1915, the business changed direction and started making chemicals based on anhydrous sulfur dioxide; hence the name Ansul. The purchase in 1939 of DuGas Engineering, a manufacturer of handheld fire extinguishers, set Ansul on its present course. Between then and the early 1980s, the original chemical lines were eliminated as fire-protection products were added to the lineup.

Now, Ansul manufactures a full line of “special-hazards” fire protection agents and equipment for the global market. Annual sales exceed $150 million – 65 percent in the United States. Domestic operations include distribution points in all 50 states; international distribution points are located in more than 85 countries. Since 1990, Ansul has been a part of Tyco International Ltd., a global holding company. Karl J. Kinkead, president of Ansul, is also president of Tyco Suppression Systems, a $350 million group within Tyco of which Ansul is the major part.

The business occupies 300,000 square feet of manufacturing/design space in four facilities located in Marinette, Wis., and employs more than 600 people. Operations also include the Ansul Fire School, which annually trains more than 1,000 customers at Ansul and on location to use the company’s products to fight fires.

Where’s the Fire?
According to Gary Nadolny, Ansul’s director of marketing, the fire-suppression products industry is highly regulated and products are tested and rated by independent laboratories. “Products are rated as to how much fire they can put out,” Nadolny says. “We’re always trying for higher ratings, which are highly dependent on the quality of the chemicals. We pride ourselves on making the highest-quality chemicals in the business.”

Nadolny explains that there are three ways to extinguish a fire – remove the fuel, the oxygen or the heat – and notes that Ansul products use various agents (dry chemicals, dry powders, liquids, foams and compressed gases). He describes the four segments of Ansul’s business in terms of their applications:Portable Units – These extinguishers weigh from 21/2 to 350 pounds, and their origins can be traced back to the beginnings of the company. In addition to the small, easy-to-operate consumer models, this line includes larger industrial models. Says Nadolny, “Our clients for these units include Mobil Oil, most of the other oil companies and most major airlines.”

Pre-engineered Systems – Nadolny characterizes this line as three types of products that provide a “system in a box:”
• Ansul’s R-102 Restaurant System is used by 75 percent of the U.S. restaurant market. These products account for more than $30 million in annual sales, making them Ansul’s biggest sellers. Nadolny notes, “This is the fire suppression system you find over the fryer at McDonald’s, Burger King, Kentucky Fried Chicken, Hardee’s and most major chain restaurants.”
• Vehicle fire suppression systems are used on large mining haul trucks, construction shovels and earth-moving equipment. “Think of the type of equipment Caterpillar, Kamatsu and John Deere provide. Ansul has sold 90 percent of the fire suppression systems in this market,” comments Nadolny.
• Industrial systems protect operations that involve flammable substances such as paint or thinners. Nadolny states, “Our systems are used in places like auto paint spraying shops or in manufacturing painting operations, like Sherwin Williams.”

Engineered Systems – These products are used to protect larger environments and industrial sites. Nadolny describes the line in terms of three environments:
• INERGEN® systems are used to protect large environments, such as office buildings, through piping networks and nozzles that discharge the agent throughout the protected area. Importantly, the INERGEN® gaseous mixture in these systems leaves enough oxygen in the air to support human life, but not enough to support fire – a critical feature in enclosed environments. Another feature is that the chemical does not damage electronic equipment, such as computers. These systems account for a significant portion of Ansul’s annual sales, making them the company’s second highest-selling product. According to Nadolny, a prime example of using an INERGEN® system is in the subterranean control area at Walt Disney World in Florida – a labor-intensive environment that houses computers, controls, and monitoring devices for the busy theme park.
• High-pressure and low-pressure carbon dioxide systems are used to combat fire in heavy-duty industrial environments that have machinery such as turbines. Nadolny refers to paper manufacturers as good candidates for these products as well.
• Large dry chemical systems can have tank capacities of up to 3,000 pounds of fire-suppression chemicals that are discharged through large hoses. They are used in environments such as offshore drilling rigs, where there are obviously no fire trucks. Another application is on crash-fire-rescue vehicles used by airport personnel.

Foam Systems – Ansul fire-fighting foams are used especially for suppressing petrochemical fires and other fires involving flammable liquid. The second part of the “foam business” comprises the hardware that is used to store, activate and apply the foam. These products include tanks, pumps, nozzles, proportioners, monitors, generators and other specialized equipment.

Future Flashes
Nadolny sees growth opportunities for Ansul in the telecommunications, microprocessing and semiconductor industries. He describes these markets as “perfect” for the INERGEN® products because the “clean” agent is safe for use on electronic devices.

In the near term, the marketer points to the success of two new Ansul products. The first is a portable fire extinguisher for smaller applications in electronic environments such as computer rooms, air control towers and theater or movie control booths. CleanGuard extinguishers contain DuPont FE-36™, a newly introduced, environmentally friendly agent that may be used on highly sensitive electronic equipment.

The PIRANHA® system for restaurants is Ansul’s second new success. Nadolny says this system is similar to the R-102 but has a “water chaser” that cools the kitchen equipment after the fire is out. The benefit of the chaser is that it helps eliminate the possibility of a reflash fire due to the hot metal of the fryer, grill or exhaust hood.

Lastly, Nadolny fully expects that growth will continue to come from acquisitions. “Ansul is acquisition-oriented. We’re always looking for vendors, competitors, customers and complementary businesses as possibilities to be part of Ansul. This is part of the Tyco model for growth recommended at 15 to 20 percent a year, a goal we are constantly working toward.”