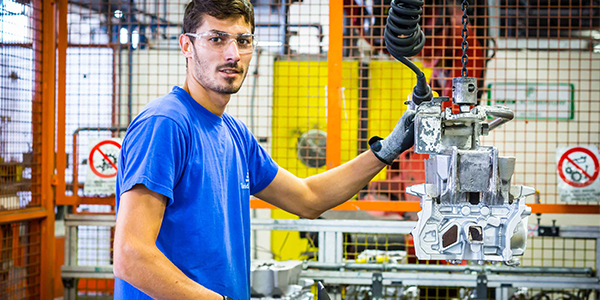 The origins of Teksid, the company that today can stake claim to being one of the largest iron foundry group in the world, date back to the dawn of the 20th century, when Italy’s Fiat was seeking a steady supplier of iron to provide it with castings necessary to build its main automotive products.

“In the 1960s and ‘70s, the world’s steel and iron market was undergoing significant changes. At the same time, Brazil’s nascent automotive industry was starting to take off,” recalls Raniero de Freitas Cucchiari, Teksid’s commercial director. These twin occurrences led Fiat to move to the Brazilian state of Minas Gerais, where it set up a plant in Betim, a burgeoning industrial and mining center outside Minas’ capital of Belo Horizonte. To continue supplying it with components in the New World, Teksid came along as well – its implementation in Brazil represented the first time the company had set foot in the Americas.

Installing itself in Betim, the foundry started out manufacturing engine blocks and components for Fiat’s automobiles. However, very quickly it realized that in Brazil’s auto market, there were few competitors in existence capable of making iron vehicle parts and next to none with Teksid’s considerable experience and know-how. “Recognizing the vast potential for growth, we identified new possibilities and started diversifying,” recalls Cucchiari. Aside from engine blocks and components, it began producing cylinder heads, transmission parts and suspension parts, among others.

It also branched out in terms of markets. After scoring contracts with other auto manufacturers (Ford, GM, Volkswagen, Renault), Teksid expanded into the diesel engine segment. By the 1980s, it was also producing blocks and cylinder heads for industrial vehicles (including Volvo, Mercedes, Scania), namely trucks and tractors. Due to high quality standards, constant technology upgrades and close integration with its clients’ product development activities, it wasn’t long before Teksid was also expanding beyond Brazil’s frontiers, exporting to the U.S. (after signing a contract with Cummins) and then Europe.

By the early 1990s, more than 60 percent of Teksid’s revenues were derived from high-volume exports to the U.S., Europe, and Japan. However, during the 1990s, two events occurred that changed the company’s direction significantly. One was the adoption of the Real Plan which introduced a new, stabilized – and more highly valued – currency, which led to increased costs and reduced international competitiveness. The second was the beginnings of a boom in terms of Brazil’s auto industry. As a result, Teksid focused its attentions on the domestic market and investing in increasing its production capacity.

This strategy proved auspicious when, in 2002, Teksid signed a contract with GM to produce all components formerly manufactured at its own plant in São José dos Campos, São Paulo. In order to meet the new demand, it added a new furnace in addition to a whole new production line. Both investments allowed the company to reach its present annual production capacity of 300,000 tons.

Today, Teksid’s iron foundry occupies 107,000 square meters (351,000 square feet) on a site whose total area measures 390,000 square meters (1.3 million square feet). A recent watershed moment occurred when the company – along with its headquarters in Italy – decided to resurrect the production of aluminum parts (primarily cylinder heads). With this goal in mind, Teksid expanded its facilities, adding a new 11,000-squaremeter (36,000-square-foot) aluminum foundry capable of churning out 6,000 tons of product a year.

The addition of the aluminum foundry sealed Teksid’s place as the largest of the Teksid Group’s many international plants in terms of size and production capacity. Today Teksid Brazil produces close to half of all the products manufactured by the group as a whole – which in 2012 added up to a total of 705,000 tons worldwide. It also boasts the group’s most comprehensive product portfolio, which currently embraces more than 200 items. Unsurprisingly, it is also reaps the highest earnings in the group; in 2012 Teksid Brazil racked up revenues of R$1 billion (roughly US$500 million).

“Ours is the only plant worldwide that makes all the products in Teksid’s portfolio,” says Cucchiari. “For this reason, in spite of the challenges in terms of the unfavorable currency exchange, exports still comprise 30 percent of our business. Aside from all the main auto manufacturers in Brazil, we have important clients in the U.S. (Cummins and Chrysler), Italy and France (FPT) and Sweden (Volvo and Scania) that insist upon our high-quality items.”

As a result of such customer loyalty, Teksid is the market leader in engine blocks – both in Brazil (where engine blocks comprise 70 percent of its business) and worldwide. However, the company doesn’t take such loyalty for granted. In Betim, the company has its own in-house R&D department, which is constantly at work creating innovations that can respond to all its clients’ – and the market’s – demands. One of its most recent and revolutionary inventions was the creation of an exclusive high resistance alloy – HPI (High Performance Iron) – which it has applied to its engine blocks and heads. Aside from looking at ways of making its products stronger, more recently it’s also been searching for ways to make them lightweight.

“Right now the biggest trend in Brazil is for lighter engine blocks,” confesses Cucchiari. “This is partially a result of new legislation by which manufacturers will have to reduce energy use by 12 percent before 2017. Those who don’t meet this goal will be faced with enormous fines so they’re really looking for new solutions.”

“To meet these needs, we’ve developed engineer blocks with thin walls that have reduced the weight of the forged steel by 20 percent,” says Cucchiari. “We’re also looking at developing engine blocks made out of aluminum. Although traditionally aluminum is more expensive, it’s also much lighter. If the market accepts this innovation, we’ll begin producing aluminum blocks for automobiles. This will be a big differential since none of our competitors work with aluminum.”

“Ultimately, what sets us apart most from our competitors is our constant diversification. Most other players in this segment only specialize in one or two items.” confesses Cucchiari. “We’ve been in the market a long time and we have the advantage of being both solid and in the vanguard.”

Meanwhile, the Brazilian market continues to expand vigorously. Between May 2012 and May 2013, automotive sales expanded by 8 percent and it’s projected that 6 million vehicles/year will be sold by 2020. As it continues to grow, Teksid, its engines revved, is more than prepared to grow with it.