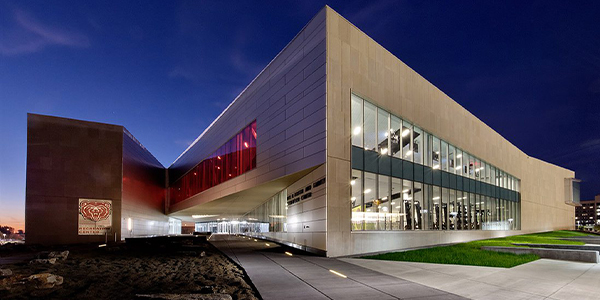 If you live in any major American city, or even just drive through one, you’ve probably seen these: soaring condominium towers, with a sleek, ultramodern glass look to attract upscale new residents.

And whether they are located on the sun-baked beaches of Florida or the grittier streets of an East Coast metropolis like New York or Philadelphia, there is one thing that many of these new urban condo projects have in common: windows, including spectacular atriums and curtain walls, that were designed and manufactured by a Missouri company called EFCO Corp.

“There is a big demand for single-source facilities that can do all of the fenestration of a building face – windows, sliding glass doors and the entire building envelope,” explained Dave Hewitt, the director of marketing for EFCO, which is based in the small town of Monett, Mo. “And in a lot of cities building this type of structure, there’s a lot of demand for products that will allow for fresh air while keeping elements out, with a high level of safety and energy performance.”

Because of the recent boom in business, EFCO, which celebrated its 50th anniversary in 2003, recently broke ground on a major expansion of its main manufacturing facility in Monett. The 75,000-square-foot expansion, expected to be completed by November of this year, will house a new extrusion press as well as a second state-of-the-art glass fabrication line. Once complete, the expansion will add up to 100 jobs to the Monett facility.

Small-town heart
EFCO is a company from the American heartland that has been able to grow by staying committed to both its small town roots and its worker-friendly values. It was one of the first companies in its central Missouri area to offer health insurance to its employees in the 1970s, and today that company is 25 percent employee owned through a stock ownership plan. “Everybody’s got a stake to some extent,” explained Hewitt, referring to the stock ownership plan as well as EFCO’s generous 401K and other employee-benefit programs. He noted that the firm is by far the largest employer in Monett, a rural town of just 8,000. The company is a major supporter of the arts, education, and charitable projects in its Missouri region.

Like many successful companies, EFCO was not initially the result of a master plan. According to the company’s history, it started when Terry Fuldner, a young engineering graduate of Washington University in St. Louis, was hired as a salesman by Republic Steel. When his new boss there asked Fuldner what he thought of the firm’s training program, he replied, “What training program?” and immediately found himself looking for a new job.

With a college friend named George Eberle, Fuldner launched a company called EFCO Product Co. that teamed up with a Florida manufacturer to sell window products to lumber yards and contractors in the St. Louis area. Each man had to borrow $2,500 to start the company.

Going commercial
EFCO Corp. was officially incorporated in 1953, and the company expanded its product line over the years. At first, EFCO was heavily involved in the distribution of residential windows, purchasing a small window manufacturer in Arkansas, as it set up shop in Monett in 1958. It also branched out into constructing aluminum cargo boxes for aircraft parts, and in 1968 it decided to concentrate on its increasingly successful commercial window line.

Despite its growth over a half-century, EFCO has managed to retain its family atmosphere. Chris Fuldner took over the company as both CEO and president after Terry Fuldner retired in 1999. Then in 2005 Phillip Roberts was named president of the company. The bulk of EFCO’s 1,600 employees work in Monett, where prior to the current expansion the firm has 400,000 square feet of manufacturing space.

EFCO expanded during the 1990s and established service and distribution centers in both Chicago, Ill., and Verona, Va. As well as a second production facility in Barnwell, S.C. Increasingly during those years, EFCO was called on for major projects in both new construction and renovation. The company completed the world’s largest window replacement project, Stuyvesant Town and Peter Cooper Village in New York City, consisting of 58,416 window units.

As the company’s reputation grew, it was increasingly hired to give stunning exterior looks and grand entranceways for everything from schools and hospitals to large public spaces such as the Conseco Arena basketball palace in Indianapolis. A typical EFCO project is the $45 million Odyssey Condominium project that was recently completed in Arlington, Va. A glass contractor installed the signature, curved EFCO glass curtain-wall system two floors at a time, and it took two weeks to complete each two-floor segment. “What sets us apart is that we do custom or unique applications very well,” said Hewitt. “We have a lot of inside sales support, as well as engineering, customer service and project management.” In addition, EFCO continually rolls out new products such as the E-Shield Fiber-glass Energy Frame system, a major advance in heavy commercial windows designed to offer greatly improved energy efficiency to meet strict new environmental codes.

Andrew’s impact
Indeed, three major news stories that have dominated the headlines in recent years have all had a major impact on EFCO, shaping the company’s dynamic growth. The first was the requirement in coastal areas for stronger windows that was dramatized first by the devastation of Hurricane Andrew in Florida in 1992. With strict new building codes in South Florida EFCO met these and other stringent standards with a variety of new products, including the recently introduced Impact Grade line of premium windows.

And hurricanes have not been the only disasters to force building owners and construction companies to look toward stronger windows. The terrorist attacks of Sept. 11, 2001, led to calls for buildings and windows that would be better able to withstand any future attack.

What’s more, soaring energy prices have placed a stronger demand for thermal, energy efficient windows and exteriors than any other time in the last three decades. Hewitt noted that EFCO is a leader in processes such as fiberglass pulltrusion, a process that is able to offer the strength of aluminum product but with less weight and more energy efficient.
“Blast mitigation, hurricane impact and thermal efficiency are the three strong growth areas, as well thermally efficient products for green buildings that will have less impact on the environment,“ said Hewitt, describing future focus areas.

That is a lot of 21st century, cutting-edge innovation, but EFCO is confident it can tackle the issues the same way it always has – by relying on its small-town values.