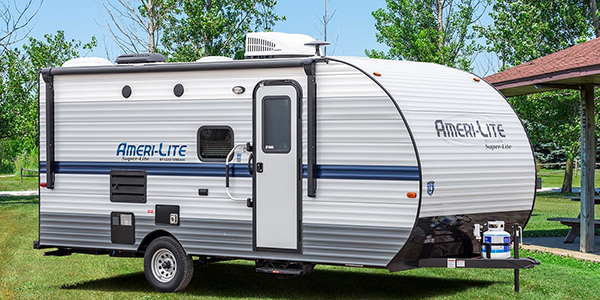 Beginning in 1971, James F. Shea turned his Fairmont Homes firm into one of the largest single-location facilities in the manufactured housing industry, producing sectional and modular homes. Encouraged by the company’s tremendous success, Shea decided in 1983 to branch out into the RV industry. His creation of Gulf Stream Coach was a logical move for his northern Indiana location, a hotbed of RV production in the heart of Amish country, where craftsmanship and pride in work is a way of life. After investigating acquisition possibilities, Shea chose instead to build new facilities and introduce innovative RV designs. Today, Fairmont and Gulf Stream combine to employ more than 2,500 people and generate sales in excess of $500 million at a 700-acre complex in Nappanee, Ind., with over 40 acres under roof. Gulf Stream’s contribution is about $350 million, with more than 1,200 employees and more than 300 dealers in 49 states, the United Kingdom, Germany, Japan, Korea and Thailand.

Gulf Stream’s first RV entry was its Sun Stream Class A motor home, with an unprecedented 1.5-inch by 1.5-inch steel cage construction. This rugged design provided a 50 percent improvement in strength more than the industry average and has since become an industry standard for durability. “We signed up more than 50 dealers immediately,” says Gulf Stream spokesperson Scott Tuttle. “That spring boarded us into other floor plans and other products.”

Since then, Gulf Stream has cruised from one innovation to another, being one of the first to introduce the “full-basement” design in motor homes in 1986 and again, in 1989, by offering this increased storage capacity with its Class C mini-motor homes. RV buyers welcomed the added cargo space that did not infringe on living quarters. Tuttle likened it to the baggage compartment of a Greyhound bus.

Gulf Stream’s ingenuity drew raves again in 1991, when it introduced wide-body floor plans in its class C mini-motor homes. There was a dramatic increase in living space as widths increased from 96 inches to 102 inches, a feature previously reserved for large bus-style motor homes. The wide-body design for these shorter, more affordable models is now common throughout the industry.

Pushing the Envelope and the Walls

The first-ever Class C mini-motor home with a slide-out “expando” room was in Gulf Stream dealer showrooms in 1994. Among the features were hydraulically operated slide-outs that had sections of wall, floor and ceiling that expanded with the push of a button when the RV reached the campground. Gulf Stream’s larger Class A motor homes, including the largest bus-style model, the Tour Master, were also fitted with slide-out rooms that year. Three years later, the Tour Master Luxury Coach was introduced with a new 40-foot double slide-out floor plan. The double slide-out feature also became available in a Gulf Stream Class C motor home, another design breakthrough.

Up Among the Leaders

In just 16 years, Gulf Stream Coach has developed into a Top Five, full-line RV manufacturer, producing Class A and C motor homes, conventional trailers and fifth-wheel trailers, which hitch into the beds of pickup trucks. Luxury van conversions and RV rentals round off the line.
Brand names of the 80,000 Gulf Stream RVs now on the road include Conquest, Innsbruck, Sea Hawk, Tour Master, Friend- ship, Scenic Cruiser, Sun Voyager, Sun Sport and Ultra. Conventional Gulf Stream travel trailers range in length from 18 to 35 feet with numerous slide-out models. Fifth-wheelers run from 23 to 40 feet and have mostly slide-out models. The firm’s Class C mini-motor homes are 20 to 31 feet in length with multiple slide-out models. Class A motor homes come in a wide variety of models on Ford, Workhouse and Spartan chassis and range from 25 to 44 feet with many slide-out models.

Satisfied customers include NASCAR drivers who prefer the larger bus-style models, according to Tuttle who also listed as customers singer Celine Dion and actor Gary Burg-hoff (Radar O’Reilly of M*A*S*H). Burghoff wrote a complimentary account of travels in his Gulf Stream Palm Breeze motor home in a recent magazine article.

Satisfied expert observers include the Ford Motor Company, which has cited Gulf Stream for its consistent quality, and Automotive News, which praised Gulf Stream in a recent article for its cell manufacturing concept, which is unique in the RV industry.

Tuttle explained the cell concept is the consummation of Gulf Stream’s “Force 2000” program. Now in its third successful year, the program not only stresses team effort, but requires significant changes in manufacturing methods and facilities to provide individual manufacturing kits for each RV, rather than gathering components from widespread storage locations, thereby helping eliminate waste and increase productivity.

Data compiled by the Virginia-based association indicate an ongoing RV boom, with Americans spending $8.4 billion last year for nearly 300,000 RVs ranging from $3,000 pop-up campers to huge motor homes costing up to $100,000. From 1990 through 1998, Beddow says, two million RVs were sold, almost a half-million more than in the 1980s, bringing the total number of recreational vehicles in service to 9.3 million. “Of all the vehicle-owning households in this country, one in 10 owns an RV,” Beddow says.