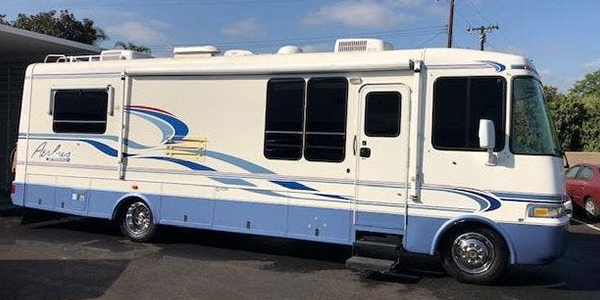 The invention of recreational vehicles may very well have taken its cue from the turtle and its shell. In storytelling lore, the turtle theoretically never goes anywhere without its “home.” Modern-day RV manufacturers are banking on the same symbiotic relationship in manufacturing and marketing their vehicles. Their gist is that people can buy an RV and travel miles to their destination, and always be in their “home.”Leading the industry in the desire to keep the shell attached to the human is Rexhall Industries, Inc., based in Lancaster, Calif. A $70 million company, Rexhall has given millions of vacationers a home on wheels since first opening its doors in 1986.

The company was founded by William J. Rex, who had been working in the RV industry for many years and had risen to become president of a major manufacturer in the early 1980s. Having come through the production ranks, Rex proved himself a visionary through his ability to evaluate the manufacturing process and translate what he saw into a top-selling vehicle based on customers’ needs.

One of Rex’s innovations in RV manufacturing was to bring the welded unibody steel cage design used by automobile manufacturers into the construction of class A motor homes (a bus-style motor home in which the driver area is part of the living space). This design “acted to unite major parts of the coach through welding parts,” says P.J. Theis, Rexhall’s director of sales and marketing. “It was a pioneering design that had never been brought into the construction of class A motor homes in a volume sense.”

The Freedom Trail
“The outlook for the future is bright given that the baby-boomer generation has now discovered recreational vehicles as a way to see the country,” Theis adds. “They are coming of age to the extent that this age group is chiefly responsible for RV purchases.” The RV lifestyle, Theis adds, also appeals to retired people who want to see the country and bring their home with them. “With an RV, you can set up your home wherever you want and it provides a lot of freedom,” he notes. “We’re also seeing more opportunities for people to purchase RVs who are interested in short vacations and weekend trips, and who see the value of bringing their home with them.”

The coming news at Rexhall is so big that no one will talk about it publicly, says Theis. Suffice to say, a major, top-secret product launch is necessitating a plant expansion from 120,000 to 250,000 square feet. The expansion is part of a significant capital-investment program, and is planned for completion in 12 to 15 months.

While keeping mum on this launch, Theis says Rexhall – thanks to the vision of William Rex – always has been known as a manufacturer that creates multifaceted innovations in design and cost reduction to bring products to market. Of the new product, Theis merely says, “It will set the industry on its ears. It’s very cutting edge. Based on our reputation as an innovator, the RV industry and retailers can expect to be excited.”

Diesel in Demand
Theis will talk about the company’s recent drive to produce diesel pushers, a design that has been changed and streamlined in varied ways over the last decade. Rexhall builds motor homes that are both gas and diesel powered. A front-end product, the gas engine traditionally has been in the mainstream as a preferred engine type. However, in the last five to seven years, the diesel pusher – a rear-mounted engine -also has become popular.

Generally, the public has flip-flopped over the years on which style is best. Today, the choice between gas and diesel seems to depend on how much power the operator wants. “With the price of gas in the ’80s and ’90s, people felt that economically, diesel would be the better way to go. But then the gas chassis was improved upon, and that reduced the advantage of the diesel engine,” Theis says. “Now it’s a matter of preference. With the diesel engine in the back, it means the engine is between the driver and the passenger, and sometimes people don’t like the noise.”

The main advantage for diesel, he adds, is that it offers a significant power upgrade over the gas engine for better performance, specifically for taking on steep roads. The diesel model is more expensive, but even that price gap is closing. Now, Theis says, “someone interested in the gas unit at $100,000 has a realistic opportunity to evaluate a diesel product at either a similar or lower price.”

Another example of Rexhall being on the cutting edge: Rexhall brought to market the “slide-out” recreational vehicle, in which a portion of the wall slides out to accommodate more living space. “We brought that to market at a good price,” Theis says.

Innovation: the Continuing Process
While Rexhall seems to be winning – or at least edging out its competition – in the race to be the leading RV manufacturer in the country, the company never seems to rest on its laurels. The need to improvise and invent better ways for leisure-time driving and living always will dominate the company’s mission of engineering top-of-the-line products.

Rexhall currently markets five primary products. These are:
¥ On the low end of the price scale, the Vision and American Clipper, ranging in length from 26 to 31 feet for gas and 36 feet for diesel
¥ In midsize products, the Air Bus and the Rexair, with gas models ranging from 29 to 36 feet and diesel models measuring from 36 to 39 feet
¥ The Rosair on the high end, with sizes ranging from 35 to 36 feet for gas and 36 to 39 feet for diesel.

Rexhall works on the belief that high-end products need to be made at the lowest cost to the consumer. Because of this, the company produces many of its RV components in house, and puts together all the electrical wiring, cabinetry, plumbing and upholstery. “The direct result of welded design and in-house manufacturing is a home of higher quality at a more competitive price,” Theis says. He is quick to add, however, that the company’s success, while attributable to its work force, also is dependent on the company’s founder. “William Rex is a visionary,” he says. “He has a great feel for the industry.”