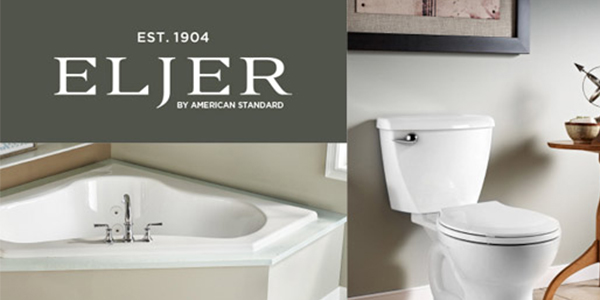 In today’s homes the bathroom has become more a thing to behold than just a functional space to “cau de toilette.” Thanks to Eljer PlumbingWare, even the most discriminating tastes are satisfied. Toilets, sinks, lavatories, whirlpools, tubs, bidets, faucets – you name it, Eljer makes it. The company’s definitive line of plumbing ware has gained it a sterling reputation for tested, proven and reliable products.

Eljer manufactures plumbing products for three major markets: residential, new home construction and the retail do-it-yourself market, such as The Home Depot, Ace Hardware and Sears. The company also supplies a specification market for commercial jobs and bid work sold through its network of more than 700 wholesale distributors around the world.

“We’ve been successful by being flexible and responsive and meeting our customer’s needs,” says Steve Rodman, Eljer’s vice president, sales and marketing. “We are really focused on listening to our customers and trying to address the issues and concerns that are important to them”.

Ad Force
The company’s tagline has rung true for nearly 100 years: “Those who know better, know Eljer.”A firm believer in solid marketing and advertising strategies, Eljer’s most recent ad campaign celebrated almost 100 years in business with four new print ads that appeared in many nationally recognized trade and consumer magazines throughout the year.

One ad focused on the company’s Century Collection, a sophisticated and classic line of toilets, tubs, and faucets to celebrate its 100th anniversary. Another focused on the beauty and durability of Eljer products and the hundreds of styles offered, from traditional to cutting-edge contemporary. Another reminds readers of the Eljer flair for innovation and advertises the new Aqua Saver pressure assist toilet. The final ad is geared to builders and contractors.

“We created the ads to celebrate our upcoming anniversary and to remind our current and potential customers just what we do and how long we’ve been doing it,” explains Chris Miller, manager of marketing services. The ads appeared in nationally circulated publications like Bon Appetit, House and Garden and This Old House. “We were really pleased with how the ads turned out and the response to them”.

Century of Success
Eljer was founded in February of 1904 by Raymond Elmer Crane and his cousin, Oscar Jerome Backus; letters from both last names became the company’s name: “ELJER.” Eljer’s original location was Oakland, Calif., where flush valves were manufactured. In 1907, the company purchased an old dinnerware plant in Cameron, W.Va., and converted it into a sanitary ware plant. In the beginning, only a washout closet bowl was produced. However, it was in this plant that the first vitreous china tank, an Eljer mainstay, was developed. Prior to the advent of the china tank, copper-lined wood tanks were the norm.

Eljer continued to grow, and in 1918 purchased a dinnerware pottery company in Ford City, Pa., located about 40 miles northeast of Pittsburgh on the east bank of the Allegheny River. The Ford City area was particularly well-suited for the production of plumbing fixtures because of an abundance of raw materials, supply of fuel (such as natural gas and coal) and easy access to transportation via railroad and the Allegheny River.

The town of Ford City itself originally was founded by Captain John B. Ford as the site of the Pittsburgh Plate Glass (PPG) plant. It was Captain Ford and John Wick who built the pottery building, now occupied by Eljer, back in 1897. The acquisition of the Ford City pottery plant enabled Eljer to offer vitreous china fixtures for every type of installation including residential, commercial, industrial and institutional. The Cameron, W.Va. plant continued its operation until 1929 when the production of all vitreous china was consolidated at Ford City. By this time, two of the longest tunnel kilns in the world for the firing of chinaware were in operation at the Ford City Plant.

“In the early 1940s, a large single deck kiln was installed in the plant. Approximately 10 years later, a larger triple deck kiln was installed,” says Miller. “Then in 1956, a second plant was built adjacent to the original plant, greatly increasing the production capacity of vitreous china products.” This plant, he says, has three one-fire, single-deck kilns, 354 feet long and one double- deck refire kiln, equally as long. Plant No. 2 has since been expanded with the installation of a completely automated, direct-fire kiln, 175 feet in length. Then in 1989 the Schenley Park Distribution Center and Plant No. 3 were added.

Today, Eljer PlumbingWare’s vitreous china facility in Ford City is one of the largest and most modern of its type in the world. Through a series of acquisitions and mergers, Eljer PlumbingWare now is a part of U.S. Industries and represents one of the most prominent brand names in the plumbing fixtures industry. In addition to vitreous china fixtures, Eljer offers a complete line of quality plumbing fixtures made of cast iron, steel, and acrylic and a complete line of brass fittings for those fixtures.

A total of 1150 employees make up the Eljer fold, including an experienced and aggressive field sales force positioned throughout the United States, a support team at the Dallas, Texas, headquarters and manufacturing and distribution facilities in Ford City, Kittanning, and Schenley Pa.; Salem, Ohio, and Tupelo, Miss.

Future Aqua Line
One year ago, Eljer re-issued its line of faucets. “We redesigned our faucet lines to include features customers have been asking for,” explains Miller. “The new designs are more popular, stylish and contempo-rary than our previous line and feature state-of-the-art ceramic disc cartridges and PVD coating that extends the life of the finish to keep the faucet looking new longer.” These changes have shown results. During the last six months, the company’s faucet business has increased dramatically as more and more customers are stocking Eljer brand faucets again.

The company also recently released a redesigned urinal for hotels, restaurants and office buildings. Designed for easier cleaning (less nooks and crannies) the urinal is sanitation code friendly. Eljer is in the process of launching a new wall-hung lavatory that is loaded with user and installer friendly features. The lavatory is wheelchair accessible and in compliance with the Americans with Disabilities Act, making it a natural for school and other commercial installations. However, the design is contemporary and “at home” in a residential installation, without the “rough and tumble” appearance of normal institutional plumbing fixtures.

Some of the other new products being introduced this year include an undermount prep sink to serve as a companion piece to the three popular undermount cast-iron kitchen sinks already offered by Eljer. A space saving but comfortable elongated toilet that fits into the same space as a traditional round front toilet, and a space saving drop-in lavatory, are being introduced in the first half of 2002.

For the future the company looks for sales to continue to increase in both the wholesale and retail channels. Eljer expects growth to come from increased sales of current and new products to existing customers, new customers added to the Eljer family, increased international business and increased sales to the hotel and motel commercial business. Sales have been very strong and business has been good for Eljer PlumbingWare so far in 2002. As the company moves into its second hundred years of manufacturing and selling plumbing fixtures, it is looking forward with optimism to see what the new century brings.