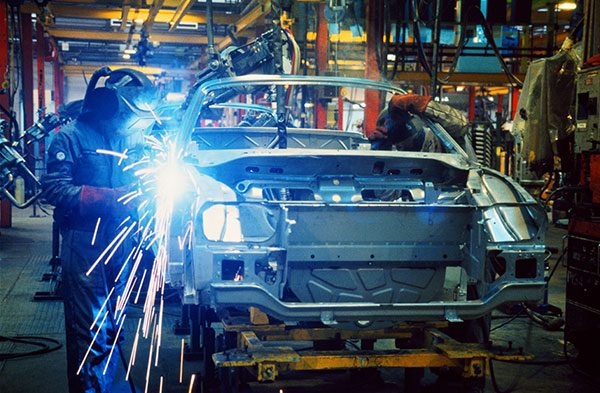 But the decades-long decline of U.S. manufacturing employment and the highly automated nature of the sector’s recent revitalization should also be high on the list of explanations. The former is an unmistakable source of the working class rage that helped get Trump elected. The latter is the main reason Trump won’t be able to “make America great again” by bringing back production jobs.

The Rust Belt epicenter of the Trump electoral map says a lot about its emotional origins, but so do the facts of employment and productivity in U.S. manufacturing industries. The collapse of labor-intensive commodity manufacturing in recent decades and the expansion in this decade of super-productive advanced manufacturing have left millions of working-class white people feeling abandoned, irrelevant, and angry.

To see this, one has only to look at the stark trend lines of the production data, which show a massive 30-year decline of employment beginning in 1980. That trend led to the liquidation of more than a third of U.S. manufacturing positions. Employment in the sector plunged from 18.9 million jobs to 12.2 million.

Much of the dislocation was concentrated in Midwestern and other Rust Belt states, where entire communities were devastated by the loss of production work. This clearly visited widespread dislocation on blue-collar workers in manufacturing-oriented metropolitan areas. Since 2000 alone millions of workers have lost manufacturing jobs paying $25 per hour plus health and retirement benefits. Often the only alternatives were service-sector jobs without benefits paying $12 an hour.

One result has been a sharp increase in political polarization in affected congressional districts, as MIT economist David Autor and his co-authors demonstrated this fall in a study of locations exposed to low-cost Chinese imports. In those communities, the loss of manufacturing jobs led to political polarization that last week led to the election of Donald Trump.

Manufacturing employment has in fact ticked up since 2010, reflecting the post-crisis auto boom and the relative strength of the nation’s advanced manufacturing industries. But that hasn’t mollified angry displaced workers. While it’s encouraging for American competitiveness and some local clusters, the new growth has been far too little, far too late to ease the distress that surely contributed to Trump’s turnout in many manufacturing communities.

It bears noting that the nature of the new manufacturing growth may only be deepening the political problem of manufacturing. Trump promises to “bring back” millions of manufacturing jobs for dispossessed workers by modifying the terms of trade: by renegotiating NAFTA, rejecting the Trans-Pacific Partnership, and slapping China with tariffs. But the fact that the U.S. manufacturing sector has been succeeding by many measures in recent years makes President-elect Trump’s promises seem like false dreams. 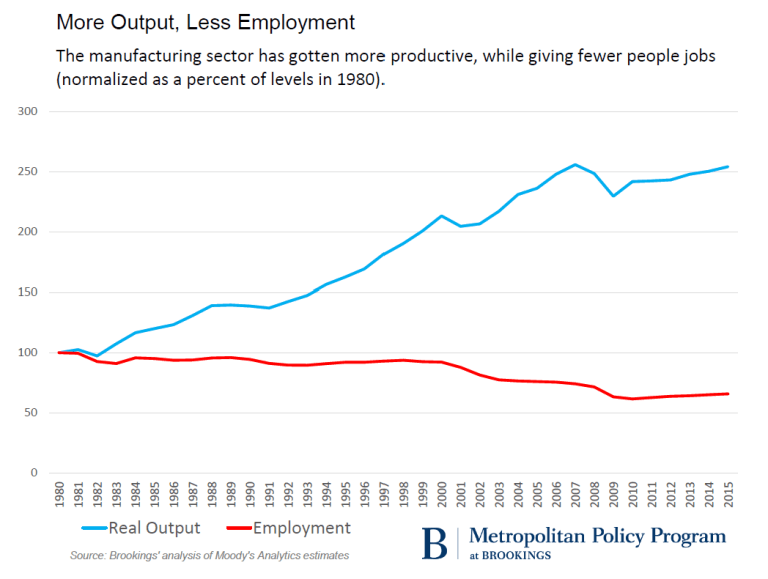 In fact, the total inflation-adjusted output of the U.S. manufacturing sector is now higher than it has ever been. That’s true even as the sector’s employment is growing only slowly, and remains near the lowest it’s been. These diverging lines—which reflect the sector’s improved productivity—highlight a huge problem with Trump’s promises to help workers by reshoring millions of manufacturing jobs. America is already producing a lot. And in any event, the return of more manufacturing won’t bring back many jobs because the labor is increasingly being done by robots.

Boston Consulting Group reports that it costs barely $8 an hour to use a robot for spot welding in the auto industry, compared to $25 for a worker—and the gap is only going to widen. More generally, the “job intensity” of America’s manufacturing industries—and especially its best-paying advanced ones—is only going to decline. In 1980 it took 25 jobs to generate $1 million in manufacturing output in the U.S. Today it takes five jobs.

The automated, hyper-efficient shop floors of modern manufacturing won’t give Trump much room to deliver on his outsized promises to bring back millions of jobs for his blue-collar supporters.

So what would be a more viable response to the plight of displaced manufacturing workers—and the needs of U.S. manufacturing? One response must be a realistic, forward-looking vision of what manufacturing is becoming (high-tech, automated, super-innovative) so as to enhance American competitiveness and allow for some additional jobs. Above all, this means investing in manufacturing innovation to keep U.S. factories in the lead; ensuring that workers get industry-relevant training that equips them for today’s digital factories; and supporting the nation’s regional advanced industries clusters, whether in Grand Rapids or Pittsburgh. On trade, the nation can and should demand fair trade and aggressively use the anti-dumping provisions in existing trade pacts to rebalance the playing field for U.S. production and rebuild public confidence.

Yet no one should be under the illusion that millions of manufacturing jobs are coming back to America. Those who would help displaced factory workers need to think much more urgently about how to provide for and accelerate what policymakers euphemistically call “adjustment” for the victims of economic shocks like deindustrialization. Some of that thought should go into strengthening the nation’s ineffectual Trade Adjustment Assistance (TAA) program, which currently provides only meager financial and transitional support to workers who have been displaced by foreign competition. The program also needs to do a better job of retraining workers to help them move into new careers.

The response needs to reach beyond “trade” adjustment. Given the growing list of labor market stresses being visited on American workers—from recessions to automation to the “gig” economy—the nation needs broader safety net and transition programs. The Affordable Care Act, with its insurance subsidies for those who have lost jobs, is a start. But the nation, states, and regions need to do more to retrain displaced or vulnerable workers for jobs in expanding industries.

Likewise, the TAA’s limited wage-insurance program needs to be expanded into a national program. Through such temporary wage insurance, workers would receive up to $10,000 a year during a multiyear transition period to replace a portion of lost wages while they train for and search for a new, more sustainable career.

Workers’ frustrations with the massive changes in the manufacturing sector played a large role in determining last week’s election results. Now it’s going to take an unprecedented spirit of realism—about technology, about trade, about inevitable change—to address those frustrations.

The Brookings Institution is a nonprofit public policy organization based in Washington, DC. Our mission is to conduct in-depth research that leads to new ideas for solving problems facing society at the local, national and global level. 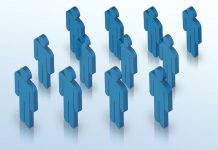 What You Need to Know About Maritime Security

Plastics and Packaging in the Aerospace Industry