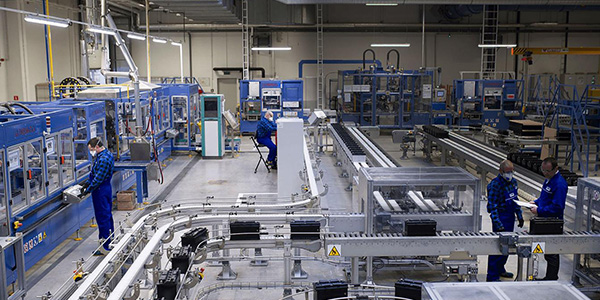 The 21st century has brought unprecedented demand for battery power to support the skyrocketing growth in wireless communications, the Internet and e-commerce; critical operations such as data centers and industrial controls that cannot be interrupted; materials handling; and the transportation needs of a world on the move. Exide Technologies’ battery products deliver this crucial power to all of these diverse applications, and to a broad customer base in both the industrial and transportation sectors.

Headquartered in Princeton, N.J., Exide is the world’s largest supplier of innovative lead-acid batteries for network power, motive power and transportation applications. With annual revenues of $3 billion, 21,000 employees and plants and offices in 89 countries, Exide holds one of the top three positions in every market it serves.

The company dramatically strengthened its leadership position last year with the acquisition of GNB Technologies, a leading international battery manufacturer and recycler. The GNB acquisition has enabled Exide to offer the world’s most comprehensive portfolio of electrical energy storage technologies and products. It also strengthened Exide’s foothold with its industrial customers in North America and international markets, including Japan, India, Australia and New Zealand. Today, Exide is dominant on every major continent.

“Adding the GNB markets and technologies gives us the global coverage that nobody else has in the industry,” says Craig Muhlhauser, Exide’s president and chief operating officer. “We’re taking the technologies of both companies and combining them to expand in markets where we both have opportunities.” Indeed, one of Exide’s strengths is that its products and services span markets and geographic borders. This gives the company the resilience to maintain financial stability and growth regardless of world economic conditions.

The Power Behind the Power

Anyone familiar with California’s energy crisis appreciates the need for stored reserves of electricity during blackouts and brownouts. In California and all over the world, Exide’s network power batteries keep critical systems such as wired and wireless telephone and data networks, railroad crossing signals and computer systems up and running during outages. They also support public utilities by helping to shift power around substations with local outages.

Exide’s U.S.-based industrial battery division, which continues to operate under the name GNB Industrial Power, produces batteries for network power and motive power applications. When power is interrupted, standby systems based on Exide batteries instantly go into action, providing electricity until power is restored or until generators running on diesel — or, in the future, fuel cells — can take over. Exide batteries also provide a power reserve for renewable-energy power generators, like wind or solar photovoltaic cells.

Network power batteries play another critical role in 21st century life. Not only do they back up traditional, wire-line voice networks, but they also support high-speed data transmission, wireless communications systems and cable TV. “The explosive growth of the Internet, the demand for increasing bandwidth and escalating demand for additional high-speed communications and data protection are all creating unprecedented demand for electric power as we move further into the 21st century,” says Mitchell Bregman, president of GNB Industrial Power. “But today’s already strained capacity for utility power generation is not being increased. This means that all of the applications for uninterruptible power will be increasingly dependent on the stored electrical energy in industrial batteries.”

In the fast-growing telecommunications market, Exide provides its customers with stored electrical energy products based on valve-regulated lead-acid (VRLA) batteries. Exide’s Absolyte and Sonnenschein brands are the world leaders in large VRLA installations, which can be found in the central switching stations and distributed power nodes of wired and wireless telephone companies, and in most major office buildings worldwide.

Motive power batteries fuel the industrial electric trucks that are the lifeblood of the materials-handling industry. They also drive mining locomotives, airport ground-support equipment, floor scrubbers, buses, electric wheelchairs, golf carts, shuttles and scooters. Exide produces batteries for this entire range of vehicles, and has complemented its motive power portfolio with an extensive offering of battery-handling, charging and maintenance equipment. “Our combination of technological and service capabilities allows us to offer a complete range of stored electrical energy solutions for the motive power market,” Bregman says.

If a vehicle has an engine, the Atlanta-based Exide Technologies Transportation Global Business Unit has a battery to start it. But the starting battery — providing the short burst of power needed to start a vehicle’s engine — is just one piece of the group’s business. The group also offers deep-cycle batteries, which provide a long-lasting, low, steady supply of power for accessories such as on-board computers, navigation devices, electric seats and windows, as well as sophisticated audio systems.

Tom Minner, president of the Transportation Global Business Unit, cites several strengths the division offers to its customers: “Obviously, we offer quality products, but we have always been known for creative marketing as well. Our customer service also sets us apart. Because we help our customers manage their product portfolios and inventory spaces, we’ve developed strong partnerships with the OEMs and the mass-merchant retailers. If you look at those retailers, our partnerships with them are crucial because many of them are going global, and doing it aggressively.”

Exide is one of a few companies in the industry that can manage the life cycle of its products from manufacture through the end of their service lives — and back into the manufacture of new batteries. The company calls its process Total Battery Management. “Total Battery Management keeps recyclable, toxic materials out of the waste stream, frees customers from the regulatory burdens of handling lead and assures them of a continuous supply of batteries made from superior quality materials,” Minner says. “About 90 percent of the material in a spent battery is reused in a new battery. That is a phenomenal example of true recycling. By using recycled lead and plastic to produce new batteries, Exide keeps its manufacturing costs in line and better manages its inventories for increased productivity and customer service.”

Through Total Battery Management, Exide recycles more than 55 million spent lead-acid batteries per year, making it the second largest smelter of secondary lead in the world and a significant recycler of plastic from spent batteries. Underscoring the company’s overall commitment to the environment, Exide was recently awarded ISO 14001 certification for superior environmental quality in five European facilities.

Today’s vehicles — from passenger cars to heavy-duty trucks — are being outfitted with more and more electronic equipment. On-board communications devices such as satellite navigation systems, telecommunications systems and wireless Internet access, and creature comforts such as TVs, video playback units and custom heated and cooled seats require escalating levels of power to keep them up and running. Exide and its original-equipment customers are working to develop 42-volt battery systems that will augment and potentially replace today’s 12-volt systems. The new high-voltage systems will consist of sealed, single or dual batteries — such as Exide’s Orbital Select, a modular system that can be located virtually anywhere in the vehicle and in virtually any position. High-voltage battery systems such as the Orbital represent a strong growth opportunity for the company.

The Orbital is Exide’s innovative, cylindrically wound battery. Its design, with six individual cells that are spirally wound, and features are the most significant battery technology breakthroughs in 30 years. The Orbital can be constructed in any configuration, from a “six-pack” to a long, straight row of cylinders, or a row of cylinders configured into a figure C or a figure S. “Orbital will be a launching pad for us to get into further applications for sealed batteries, and could serve as the basis to develop high-voltage systems with smaller, lighter and more efficient components,” Minner notes.

The flexibility of its design and its safety characteristics make Orbital the heart of Exide’s high-voltage battery systems. It is powerful, spill-proof, virtually indestructible and truly versatile. The Orbital is used in marine starting applications and for military applications such as tanks, armored personnel carriers and the next generation of air defense vehicles.

Exide’s industrial and transportation sectors are the premier suppliers of batteries to military forces around the world. Its batteries back up the power plants on nuclear submarines and power the majority of the world’s diesel electric submarines. The company is the sole supplier to the U.S. Navy for submarine batteries, and supplies batteries for surface ships. It is also a major supplier both to the U.S. Army for ground vehicle batteries and to NATO countries for tank and ground vehicle batteries. Exide batteries are found in military vehicles at 218 military bases in the United States alone.

Exide also conducts research and development in emerging electrical-energy storage technologies that will lead it into new markets or provide new applications for existing markets. Muhlhauser says, “There is a whole range of new applications for us to explore, including network power, telecommunications and data applications. These could give us growth rates ranging from 12 to 15 percent in the industrial sector.”

One of the technologies under development is dual graphite, an innovative chemistry that incorporates graphite in the positive and negative plates. Exide is evaluating this chemistry’s potential to produce a battery that can deliver the same amount of energy as a lead-acid battery but at one-third the size and weight, with better performance in extremely hot conditions and superior environmental properties. Dual-graphite chemistry is a potential stored electrical energy source for telecommunications, laptop computers, military equipment and power tools. If it proves successful, it also could be used for automotive starting batteries or in 42-volt applications.

The lead-acid battery is an example of evolving high technology at its best. Since 1888, Exide has been at the forefront of the most significant developments of this technology. Through the years, Exide researchers and engineers advanced the lead-acid chemistry to make a battery that is smaller, more powerful, safer, longer-lived and less expensive than its predecessors. Exide’s innovations have made this portable power source indispensable to 21st century life and unmatched in its versatility and economy.