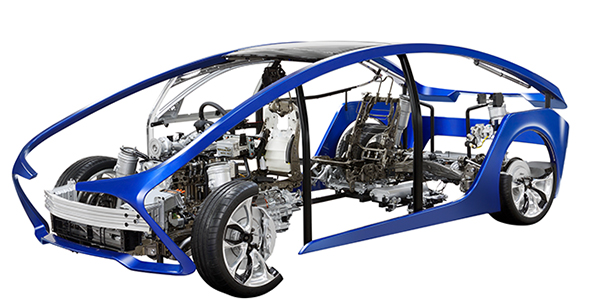 In 1986, when AISIN USA MFG. INC. broke ground on its first North American plant in Seymour, Ind., the company was in effect seeding the territory with a business that would spread throughout three countries. What began with the manufacture of moldings and doorframes for the Toyota Camry has grown to a multi-location conglomerate. In addition to Toyota, AISIN USA supports a number of major automobile makers including Honda, General Motors, Mitsubishi and Nissan, which in turn bolsters local economies in Michigan, Kentucky, Tennessee, California, Illinois, and, of course, Indiana, as well as Canada and Mexico.

“Today, AISIN U.S.A. is a leader in the creation and production of high-quality components and systems for the automotive industry’s most demanding companies,” said Vice President John Donovan. “We are passionate about quality and tireless in our efforts to be the best in everything we do. We strive to be the best employer in our communities and are committed to providing challenging and rewarding careers to our team members. As a result we have found that this commitment is rewarded with uncommon loyalty and team spirit.”

Still part of the Toyota Group of companies, AISIN USA exemplifies how a foreign-based company can successfully follow its main customer into America and build roots within communities and even establish relationships with new customers. Additionally, the mammoth size and scope of an international corporation like AISIN, based in Japan with operations around the globe brings with it benefits as well as challenges in an industry defined by quality and safety demands and fierce competition. To fully understand AISIN USA’s remarkable progress in this region, one must review the full scope of the company’s many operations in North America.

That same year, AISIN USA set up a production facility in Marion, Ill., where 350 employees are dedicated to the manufacture of sunroofs, slide door modules, power slide door units, power back door units, and outside handles, among others. Two years later on the same street in Marion, AISIN expanded operations to make bumper reinforcement, ABS bodies and extension sub-assemblies for front bumpers.

There is a common theme found among this dizzying array of products and locations. Said Donovan, AISIN USA attempts to set up manufacturing processes around specific automotive systems, rather than one-off part fulfillment. In other words, the company takes a strategic approach to manufacturing a brake or door system so that it can, in essence, own all the components of that system. Once identified, provisioned, and proven AISIN USA then justifies the build out of a plant primarily dedicated to a specific system.

“Our major focus is trying to look at total systems, for instance, brake systems, drum rotors calipers, and pads,” said Donovan. “One by one you need to make those parts, so we came up with a plan to make the best system. For example, we started doing roof systems for Toyota and General Motors, which includes exterior roof stamping, surround, moon roofs and sunroofs. By 2001 that particular business line was growing in leaps and bounds, which led us to form the facility in Marion to focus on sunroof systems.

“It’s also how we grew the power sliding door and backdoor system business. Once we gained design control of the mini-van sliding door, the rails and the rollers, the window regulating modules that allows a back sliding door to go up and down, we were able focus on door systems in our Marion facility as well.

“There’s a place for contract manufacturing, but I think that manufacturing systems allows you to challenge your engineering talent to be superior to someone else’s design, which breeds a certain amount of pride that transcends the business. At times you may have a thin profit margin, but the system approach has a major impact on overall quality.”

Team play
According to Donovan, the Seymour plant remains the breeding ground of the business, having “fathered” virtually all other AISIN USA facilities. But there have been exceptions whenever the company becomes faced with time and space constraints to produce a particular component. Case in point: Most recently, an AISIN USA plant was established in Clinton, Tenn., in 2004 to produce aluminum engine components including pumps and pistons. Located 90 minutes south of the London, Ken., facility, the Tennessee plant is projected to employ 370 workers in two years, compared with the nearly 600 employed in Kentucky. The new facility in Tennessee will allow the Kentucky plant to more closely focus on die casting for pistons, timing chain covers, and bell housings for automatic transmissions, said Donovan.

“The Clinton, location is a great choice because some of the workers were driving an hour away to get to London,” said Donovan. “Now it’s fairly easy for many of those workers to simply go to Clinton, which greatly improves their quality of life and our overall production.”

That sentiment reflects AISIN USA’s commitment to its employees, which is unusually personal coming from a large international company that has continued to enjoy impressive growth, from $50 million in 1989 to $1.8 billion last year. Undoubtedly it’s the employee-first attitude that has helped fuel the success.

“Our quality shows in our commitments to education and training, workplace safety, community support, and environmental responsibility,” said Donovan. “Perhaps most important, our quality shows in our team members. They’re the reason AISIN is so successful at delivering top quality products, competitively priced and on time every time. Ordinary people doing extraordinary things – that’s who we are at AISIN U.S.A. We are a company built of team players – a group of people from diverse backgrounds, with unique ideas, committed to working together to achieve much more than we can possibly realize on our own.”

Looking ahead, Donovan indicated that AISIN USA is very involved in emerging automotive technologies such as those found in new hybrid vehicles. The promise of vehicles that could achieve 600 miles per gallon of gasoline is exciting, especially to a company like AISIN USA with a proven track record of success developing system components. No matter the technology, it is safe to say that AISIN USA will be ready to build a system for it, which means more dedicated plants, more employees, and a continued positive impact on its bottom line, the automotive industry, and the overall economy.