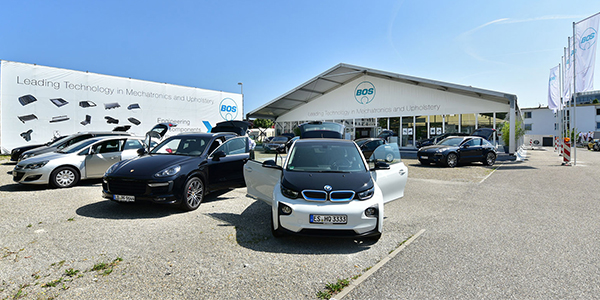 Although the restraining net system has long been in use in Europe, where the German parent company of BOS Automotive has been making more than a million units for customers like Opal and DaimlerChrysler, officials with the firm continue to push for more widespread use in this country.

“This is an interesting feature that not many vehicles have in the United States but that we hope really takes off,” said Tom Steigerwald, the director of sales of BOS Automotive Products, which is based in Rochester Hills, Mich. “In an open-ended SUV, you do not have a delineated trunk space between the cargo area and the passenger area. If you were to pack for a vacation and there was an emergency stop or a front-end collision, your luggage would have to go somewhere. You’ve got kids in the backseat and hundreds of pounds of luggage – the dynamics are extreme.”

In fact, officials from BOS Automotive have traveled to Washington to meet with officials from the Insurance Institute for Highway Safety and even to lobby members of Congress to make a restraining net a federal mandate.

The restraining net is just one of the products for automotive interiors that have made BOS Automotive an industry leader in the field, even though the firm has only had a presence in the United States for roughly six years. The firm also makes luggage covers, sunshades, and other interior parts.

German roots
BOS Automotive has always been a company that’s thought about cars and how to make them better in unconventional ways. That goes all the way back to the founding of its parent company back in Germany in 1910, as a supplier of accessories and parts for Mercedes Benz.

In the 1930s, the young company made a name for itself by supplying Mercedes with a rudimentary sunshade, similar to blinds including the drawstring. Today, the parent company is known as BOS GmbH & Co. KG, and it is still headquartered in Stuttgart, also the home to Mercedes. Still privately held, BOS is an international company with locations in Eastern and Western Europe, the United States, Mexico, as well as in Asia.

Surprisingly, the company is a fairly new arrival in North America. In 1998, two of its major customers, BMW and Mercedes, had set up “transplant” manufacturing operations in the American Southeast, and so BOS came here to set up shop close to its two customers.

Eventually, BOS Automotive built and moved into a new, 50,000-square-foot manufacturing facility in the small town of Morristown, Tenn., which is in close proximity to both BMW’s South Carolina factory and the Mercedes plant in Alabama.

“We wanted to make sure that we had a stable workforce and we thought that was a good place for us,” said Steigerwald. “We wanted the convenience of both the interstates and the nearby airport in Knoxville, which is a good airport. We’ve grown by leaps and bounds in the states.”

Two years ago, BOS Automotive acquired a worldwide non-exclusive license from Research Frontiers Incorporated to manufacture and sell automotive sunshades and sun visors using Research Frontiers’ fast-responding suspended particle device (SPD) light-control film technology. Light and glare adjustment can be automatic, using an ordinary photocell or other sensing device, or can be done by the driver or passengers manually by simply turning a knob.

“Our sunshade market has been growing,” Steigerwald explained. He said that vehicles manufactured in America are becoming more and more similar to those made in Europe, where BOS Automotive’s parent company has already established a leadership role. For example, he cited the new Cadillac SRX models, which offer a much larger sunroof than traditional North American models but are perfect for BOS Automotive’s European expertise.

‘Bread and butter’
But Steigerwald calls luggage covers “our bread and butter” and noted that the company now dominates some 80 percent of this American market. This end of the business, he added, is expected to grow in the U.S. with motorists purchasing more vehicles like SUVs or mini-vans every day. “If you look at the market for open-ended vehicles, it’s gone through the roof,” he said.

In 2003, BOS Automotive purchased a small company called Butz-Ieper, also a European-based company with an interior product called the ExAcT System, which stands for “Expand and Access the Trunk,” Steigerwald said.

Butz-Ieper had operated a plant in Puebla, Mexico, that largely services a Volkswagen plant and is now an integral part of the company. The parent company services the worldwide market through its global network of factories, including a relatively new one in China. “That plant will do very well in the world market,” Steigerwald said.

Steigerwald said one reason the company is able to grow worldwide is because of an increasingly strong relationship with the Japanese automaker Toyota, long considered one of the industry’s bellwether companies. Currently, BOS Automotive manufactures sunshades for models like the Toyota Camry and Avalon, as well as the Sienna minivans. “We’re working with another Toyota program. Not only does that make us an incumbent supplier in order to gain Japanese domestic market, but we’re able to utilize our China production facility.”

Here in North America, Steigerwald said the company has been highly successfully in building its market, relying on a list of customers that has now grown to include virtually every major automaker in the world. “Our strategy is to take anything that touches our current products or anything in that vehicle that uses the same or a comparable technology that we produce in our manufacturing process, that’s where we’ll start to migrate. We’re always looking for that next mountain to climb,” he said.

And what might that next mountain be? Steigerwald said BOS engineers are currently hard at work designing a new type of modular system for the rear seat of passenger vehicles. This system opens through the center and provides much easier access to the trunk than exists right now and provides comfort and convenience features like DVD players or gaming systems. For a company that started out by making sunshades, the future looks about as bright as a Florida parking lot on a summer afternoon.