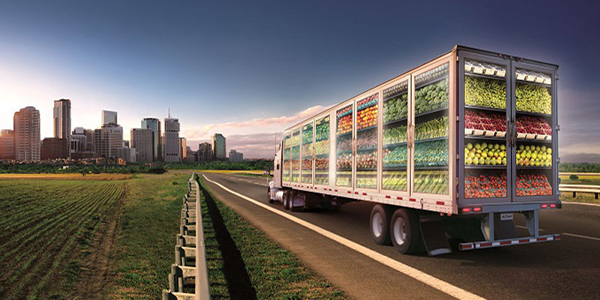 When food companies such as Bob Evans Farms tells consumers that its products are on the farms today and at their homes tomorrow, they’re able to make that claim thanks to temperature control provided by carbon dioxide (CO2). Likewise, food service enterprises such as restaurants, fast-food outlets and convenience stores realize the benefits of CO2 in providing fresh foods as well as that characteristic sparkle of carbonated soft drinks.These advantages are provided by CO2 purveyors like Pain Enterprises Inc. of Bloomington, Ind. For almost 50 years, Pain Enterprises has enabled its customers to realize their quality requirements through the application of CO2 in the form of gas or dry ice.

In the last half century, the emergence of CO2 applications resulted in a symbiotic relationship between suppliers such as Pain and food industry customers, as CO2 spurred the growth in the fast-food and convenience sectors which, in turn, proved an economic boon for CO2 suppliers.

Diverse Applications
During this period, CO2 has proven to be a versatile substance. While food-related enterprises comprise the bulk of Pain’s business, the company also serves a large and diverse range of other industries. As the company has grown, Pain products and services are also used by customers in the medical, scientific and chemical industries. While CO2’s most visible application is in carbonation of soft drinks and other beverages, it is also used in packaging to increase the shelf life of meats and cheeses. But it is also used in oil and water wells, water treatment for pH control and fire extinguishers. It further helps stimulate plant growth in greenhouses and it acts as a shielding gas in welding.

Out of Welding and into Restaurants
Pain Enterprises was established in Marion, Ind., in 1957 by Jack Pain, Sr., as a welding supply business. As such, the fledgling company became involved in compressed gases like CO2.

At the time, major industrial gas companies were distributing such gases, but they sought to disassociate themselves from distributorships. As they were selling, Jack Pain was buying – and as he bought, he developed a notion for a new business direction. Jack Pain, Jr., now the company’s president, recalls his father’s plan: “My dad always wanted to do more with the local markets, so he took the CO2 from the welding supply business and developed it for the restaurant business. He saw a market opening and he just ran with it.”
The senior Pain started the company in a single-car garage, equipped with only a pickup truck and a bulk storage tank that held 5,000 pounds of CO2. His aim was to canvas area restaurants for business. He’d start in Marion then go from town to town, visiting prospective customers, making his presence and his offering known through repeated rounds. Persistence paid off. “When people saw how consistent and reliable he was, they would start buying from him,” recalls his son.

Jack Pain, Sr., operated as a one-man show for a number of years, filling cylinders and delivering carbonation to restaurants. As business increased, he hired employees and bought more delivery trucks. Later, he began selling dry ice as well, and the business began to “snowball,” according to Jack Pain, Jr.

Throughout the next two decades, the company expanded as Pain made a number of small acquisitions. “We acquired a lot of the small players in the region,” Pain recalls. “When someone was ready to retire or wanted to get out of the business, they’d offer to sell to my father.”

Bulk Delivery
In the early years, Pain Enterprises delivered CO2 in cylinders, but the company underwent a substantial development in the 1980s when it got into bulk delivery. Jack Pain, Sr., convinced his customers about the advantages of storing CO2 in mini-bulk tanks.

Bulk delivery service has endured because, for one thing, it is safer. No one has to move or lift cylinders, so injury risk is eliminated. Further, supplying in bulk is more convenient and cost-efficient. It involves placing a storage tank inside a customer’s location. Installation entails no great logistical problems, as a tank takes up only three to four square feet of valuable space. The CO2 is delivered through an outlet in an outside wall. In this way, Pain can monitor usage and employ a route-cycle process to refill the tanks when needed. Typically, tanks are refilled every three weeks, with deliveries scheduled at the customer’s convenience, usually during non-peak business hours.

Thanks to bulk delivery, customers have access to non-stop CO2. Previously a Pain customer would have had to replace a CO2 cylinder when drinks went flat and patrons complained. Now, CO2 never runs out, and this translates into cost savings, as fewer customers ask for drink replacements, and restaurants don’t waste drink syrup, cups, lids and straws.

Bulk delivery steered Pain Enterprises into designing its own delivery trucks, with the design based on the unique needs of its industry. “People who were making our trucks had never delivered an ounce of CO2, so they had no idea about what these trucks required,” says Pain. “So we began building our own delivery units, which we called mini-bulk trucks.”
For truck design and distribution expertise, Pain created a wholly owned subsidiary, Roush Transport, Inc., headed by Matt Pain. Roush (from mother’s maiden name produces company trucks that carry up to four tons of CO2. Drivers only have to connect the truck equipment to a restaurant wall to fill an order. “We saved a lot of money, and it allowed the restaurants to have more product on hand when they needed it for all of the different uses they now had for CO2,” says Pain.

The Dry Chill
But Pain is not just about CO2. In 1977, the company added dry ice to its offerings. In the ensuing years, the company experienced a steady increase in dry ice production and distribution.

Dry ice is the solid form of CO2. With temperatures at -109.3°F (-78.5°C) or below, dry ice especially useful for freezing items or keeping items frozen. It provides refrigeration for perishable products on airlines, trucks, railroads, and recreational vehicles. For the packing and processing of foods, it inhibits bacteria and preserves meat, poultry, pork, and seafood. In the grinding and blending of heat-sensitive produces (e.g., ground meat, bakery blends, flour, spice), it retains a cool temperature during the mixing. It’s extremely useful for shipping frozen food, ice cream, pharmaceuticals and chemicals. Moreover, it comes in handy at times when emergency refrigeration is urgently needed, such as when refrigerated trucks, commercial coolers, and cold storage units experience mechanical or power failure.

Pain sells ice as solid blocks, which are cost effective and easy to use; or as custom-cut slices, which can be separately wrapped or bagged; as pellets for blast cleaning; or in pulverized form, for special blending or packing needs. The company also makes and sells insulated shipping and storage containers ranging in size from small bags and insulated boxes to polyfoam containers of up to 96 cubic feet.

Pain to the Rescue
Because of its inherent qualities, dry ice has also proven beneficial in large-scale emergency situations such as hurricanes, tornados and major power failures. Pain’s assets – its plants, vehicles, and packaging innovations – have enabled company to respond rapidly to recent disasters such as Hurricane Katrina that devastated Louisiana and the Florida hurricanes.

“Recently, we’ve had to send down a tremendous amount of dry ice to Florida, Mississippi and Louisiana because of all of the power outages,” reports Pain. “Ice producers in those areas were unable to make ice because they had no power.”

Pain has made the shipping of dry ice much more feasible in those kinds of situations. “The packaging we developed are throw-aways, and we can put up to 3,000 pounds in one of these things,” says Pain. “If we ship it out to a hurricane-devastated area, we can provide a lot of ice without having to worry about getting the containers back.”

Pain Enterprises has fostered disaster preparedness within the company. “As far as hurricanes, we watch where they’re going, talk to the people in those areas, and develop presets for action,” says Pain. “We have to be proactive.”

For Hurricane Katrina, Pain kept a close eye on the developing situation. Although the company didn’t anticipate the extent of the destruction, they were prepared for calls. And when those calls came, plans ran smoothly. “We’ve been through hurricanes before, so we knew what to do,” comments Pain.

He adds that Pain Enterprises moved dry ice into the South from all of its plants.

In 2004, Pain sold its bulk CO2 beverage carbonation business to NuCO2 Inc., Stuart, Fla. NuCO2 is the largest supplier of bulk CO2 systems and services for carbonating beverages. Its customers include McDonald’s, Pizza Hut, Wendy’s, Red Lobster, Outback Steakhouse, Applebee’s and Ponderosa Steakhouse. But the sale doesn’t mean that Pain is no longer involved in distribution. “We still distribute CO2 to restaurants, but not as much as before,” reveals Pain. “After the sale, we developed quite a business with NuCO2. We build trucks for them and supply cylinders and other aspects on the distribution side that someone might need to run a business.”

All in the Family
Today, Pain Enterprise remains a family-owned business. While Jack Pain Sr., at age 79, is still a very active chairman, he has turned over the day-to-day operations to his eight children. His three sons, Jack Jr., Matt and Mark, direct operations.

He indicates that the company’s direction is to focus on those two markets by growing within the Midwest and expanding into the East and South, where there is greater demand. “We really want to move into the east, because of its larger population and minimal supply of CO2. It’s a very attractive market,” says Pain.

The company has also developed a strong focus on service. In the CO2 market, success is not just based on products but providing good service as well, says Pain. “In our markets, service is the key,” he explains. “Everyone has a product out there, and dry ice is pretty much just dry ice. So it’s what you can do with it, as far as processing and packaging. That becomes your hammer as far as going out and getting business. Also, you have to be consistent with your delivery. You can’t have a bad day.”

Pain Enterprises growth was initiated by its founder’s keen market sense and his ability to recognize and then seize opportunities. Apparently, he passed his initiative onto his sons, who have expanded the company and taken it into new directions. New opportunities are already apparent, and Pain is well-positioned to realize its ambitions.