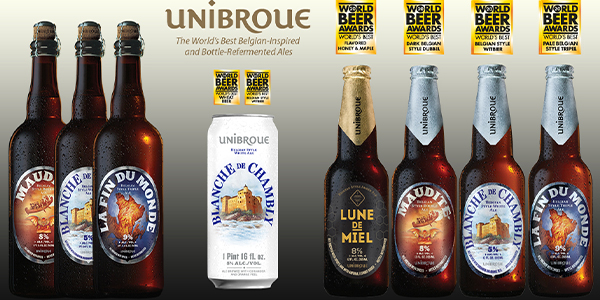 Beer is not typically thought of as a drink for connoisseurs, more frequently associated with a college frat and Super Bowl parties than as a staple of a hearty workingman’s or sportsman’s diet. Not the sort of thing you’d swirl about in a glass and sniff for its bouquet.
However, the rising growth and popularity of microbreweries, also called craft breweries, which generally offer higher-quality, distinctively flavored alternatives to mainstream commercial mild-tasting lagers, has slowly begun to change heads about this stereotype. While “head way” has been made in developing more discerning taste buds, there’s still more to be done to educate consumers on beer as an accompaniment to fine dining. So says Laurent Xavier Gilbert, vice president of Unibroue (pronounced “uni-brew”) Inc., a specialty brewery based in Chambly, Quebec, Canada.

Towards that end, Unibroue has partnered with a nearby restaurant to showcase its unique upscale brews in what Gilbert characterizes as “the place where beer and wine meet as part of a fine dining experience, enjoyed in the company of good friends.” Gilbert notes that, as a small brewery, Unibroue lacks the advertising dollars for most mass media outlets, relying instead on “word-of-mouth” exposure through tastings at trade shows, information on its Web site, and the efforts of its distributors.

It’s proven a successful approach that’s bubbling up to gain Unibroue beer a larger role at the consumer table since the company’s inception in 1991. Today, Unibroue is the largest microbrewery in Canada and among the largest 20 microbreweries in North America. Unibroue makes in-bottle refermented beers and ales in a process that is similar to champagne, except that the yeast is left in. Indeed, these refermented beers are corked the same as a champagne bottle. “There’s a naturally cloudy appearance to these beers and the higher CO2 count provides a more bubbly effervescence. The results is a more flavorful product that, like better wines, has a distinctly desirable smell and aftertaste,” says Gilbert.

Originally a privately-owned company, Unibroue was acquired in 2004 by Sleeman Breweries Ltd., the third largest and fastest growing brewery company in Canada (Sleeman is currently about to be acquired by Sapporo Breweries, Ltd., the Japanese corporation with worldwide beer and wine as well as real estate holdings). “The acquisition by Sleeman provided resources to help us expand, and we see the new relationship with Sapporo as providing even more support for future growth,” Gilbert says, emphasizing that Unibroue retains the autonomy to pursue its particular niche market.

“We’re not about the lowest common denominator,” he notes. “There are all sorts of models for delivering quality beer, but ours is not the mainstream. We’re considered a SIM – a specialty integrated microbrewery. This particular subset of the industry is growing at a phenomenal rate.” Indeed, according to industry trade group the Brewer Association, craft beer sales are not only up for the third straight year, but sales appear to be accelerating. “The volume of craft beer sold in the first half of 2006 rose 11 percent compared to the same period in 2005.In 2004, the volume of craft beer sold increased by seven percent and in 2005 it rose by 9 percent.”

Gilbert notes that 20 years ago, craft beers were virtually unheard of. “Distributors were understandably reluctant to carry product they didn’t know would sell. When we started business, the naturally hazy appearance of our beers put distributors off, it didn’t look like beer to them.”

So what caused the change in taste?

“Well, back then nobody knew about good beer,” Gilbert says. “Everything was aimed at drinkability – meaning it has a kind of inoffensive, some would say bland, taste that encourages increased consumption. That’s one extreme for beer, and, like everything else, the pendulum has moved away from mere consumption to an appreciation of how the beverage can enhance a meal or a social situation. It started with the import beers such as Heineken and Becks, more strong bodied, more filling kinds of beverages. At around the same time, people became more interested in different varieties of food than just common fare, and craft beers were ideally suited to address that niche. So microbreweries like Samuel Adams started to make inroads as a way to not only have a better tasting beer, but one that had a local identity that is attractive to consumers who think of themselves as trend setters or at least not following the herd.”

While microbreweries originally sprouted up in college towns and metropolitan areas, Gilbert believes craft beers are ready for the mainstream (and, after all, Samuel Adams is now a national brand). “It’s because of the widespread acceptance of ethnic cuisines such as Indian and Thai, exotic food that has become more and more popular even outside cosmopolitan centers. The food is extremely spicy and it demands a beverage that balances that taste with something slightly sweet that complements it. That’s the niche for products like ours.”

Gilbert emphasizes that Unibroue is at the peak of that niche’s pyramid. “We’re the high-end for Belgian style brews and ales. We have 20 different brands, and we export nine of those to the U.S. We do make a pilsner, but that’s for local consumption, it doesn’t have the shelf life the re fermented ale does that’s suited for export. All our re fermented ales are sold in either a 12-ounce bottle or a 750 m champagne-style bottle complete with a cork. To properly reflect the premium content, all the artwork and packaging is of the highest quality.”

He adds that, “Traditional beers aim at creating brand loyalty, but craft beers, by definition, address a different kind of consumer, what you might call `the samplers.’ They’re not looking to drink the same beer every time they choose to drink beer. We expect our target audience to shop around, but, of course, we hope to entice them to shop our brands. So, the trick is to maintain and build the core portfolio, but at the same time expand with new product because our target market is always looking for novelty. At the same time, wholesalers typically feel that too many brands may not be the best thing for them to carry.”

Craft beers also carry a greater cost. “While we have automated some of the process, there’s still an artistry that requires skilled workers; also, our all-natural brewing process is more time-consuming, Gilbert explains. However, because it equates to higher quality, craft beer drinkers are more than willing to swallow the higher cost. While profit margins are less expensive, mass produced beers anticipate higher rates of consumption, craft beers are consumed more like a good bottle of wine, and therefore the cost is viewed in much the same terms.”

Adding to the cost, and the attraction, of Unibroue beers is the total lack of chemicals in the brewing process. Most Unibroue beers are brewed using an age-old Belgian process of in-bottle refermentation that is only partially filtered. Unlike the industry norm of totally filtered beer, this means Unibroue beers keep all their protein and part of the yeast. The lees, or sediments, deposit themselves at the bottom of the bottle as result of refermentation and natural carbonation. This method gives a very particular taste to the beer and provides a natural source of vitamin B. Every single beer is brewed in one batch and is not water-softened.

According to Gilbert, “Given that the beers contain no chemical additives or preservatives, they require strict quality control. This all-natural brewing process is also why our beers are higher in alcohol content and can provide thicker foam with a rich flavor without the bitter aftertaste of conventional beers. Moreover, they have a longer shelf life and adapt very well to the room temperatures, unlike conventional beers.This competitive edge makes Unibroue products attractive to foreign distributors.”

The brewery in Chambly, a suburb of Montreal, employs 80 and is capable of producing 100,000 barrels a year. About 60 percent of the beers produced are refermented. “We haven’t reached capacity, yet, though demand has grown to the point that we will be adding a second shift,” Gilbert notes.

While the company slogan proclaims of its filling beers, “Drink less, drink better,” Unibroue expects that more people drinking better will result in even more refreshing levels of consumption.