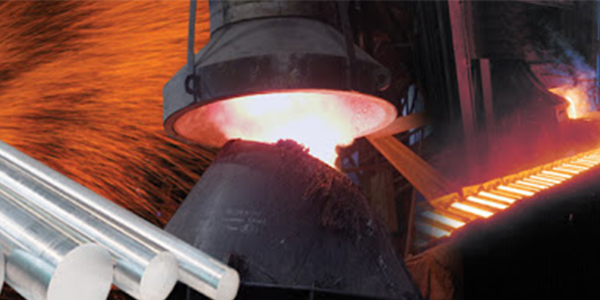 Reducing carbon content had been a problem in the early development and manufacturing of stainless steels. In 1970, however, Michael Kral did something about it by putting into operation the first commercially licensed argon-oxygen decarburization vessel in North America. Thus Electralloy was born as a custom-melt producer.

The company began producing stainless steel by recycling grindings. Prior to its reclamation activity, this metallic refuse went into bases for roads or was simply placed in landfills. Electralloy made better use of it, and thus enhanced its reputation. Its argon-oxygen decarburization and electric arc furnace-melt processes minimize metal loss, such as nickel and chromium, to the environment. The stainless steel that emerges from these processes is completely recyclable and environmentally friendly, reducing manufacturing life-cycle costs and providing low-maintenance materials for the most demanding corrosive environments.

Electralloy continued its investment as a leader in custom melt in 1998 by completing a major capital project, the construction of a new electroslag and vacuum-arc remelt facility. Today, the Oil City, Pa.-based company enjoys a high-level standing as both the custom-melt producer of choice and the leader in providing metal and metallic recycling.

It markets these products to a wide array of industries, including industrial equipment, aerospace, petrochemicals, power generation and recreational products. As an example of the latter, the company is a major supplier of the stainless steels used in the manufacturing of golf clubs (but don’t blame Electralloy for your slices, hooks and missed putts). Electralloy has specialized in high-quality standard and custom-melt alloys for more than three decades. It can custom-melt alloys in virtually any grade, size or shape.

Combined Strength
The company is part of the steel division of G.O. Carlson, Inc., which purchased it in 1991. Located in Thorndale, Pa., G. O. Carlson is recognized as a world leader in providing high-performance corrosion- and heat-resistant materials, with a history dating back to 1936. In addition to custom-melt stainless and nickel alloys from Electralloy, G.O. Carlson’s steel division can supply titanium and other specialty metals in a wide variety of shapes and sizes such as rings, mill plate, discs, heads, tube sheets and specialty cut shapes. The joining of Electralloy and G.O. Carlson has provided the stainless and specialty steel industries with a strong, stable company willing to invest in equipment and people to remain “world competitive.”

Electralloy’s management team is headed by Tracy Rudolph, the president and chief operating officer. Reporting to him are Tom Wood, senior vice president for operations and technology; Wayne Weaver, vice president of sales; and William Warren, accounting and administration manager. It is a strong team and it makes for a strong company.

Also contributing to Electralloy’s strength is its emphasis on technology and capital investments. The company’s modernized vacuum-arc remelt and electroslag remelt furnaces have exponentially increased the company’s capacity to an annual output of 10 million pounds and 7 million pounds for each process, respectively. All of its production controls have been computer based since 1999, helping to forge the path to uniformity, precision and quality. The same computer system that keeps track of inquiries and orders also checks raw-material compositions and handles heat calculation. Statistical process control systems monitor every step of the melting, refining and teeming practices.

Making the Grade
Superior testing procedures guarantee the manufacture of superior products. Electralloy performs mechanical and non-destructive testing to customer and industry standards for each order, using the most advanced testing techniques and equipment to evaluate quality from the initial chemistry to the final fabrication and production. The Electralloy laboratory facility includes X-ray spectrographs, a computerized emission spectrograph and Leco gas, oxygen, nitrogen, hydrogen, carbon and sulfur determinators. As proof of product quality, the company furnishes a certificate of analysis with each shipment.

The company prides itself on its commitment to service. Lead time is measured in weeks, not months. Date-change flexibility is part of the commitment. A “no job or customer is too small” attitude is apparent throughout Electralloy. The client is not alone in the decision-making process. Electralloy personnel are readily available to provide technical assistance to the client to save money and time.

Electralloy can boast of more than 600 clients. Most of them are in North America, but product also goes to non-NAFTA nations, including the People’s Republic of China, Taiwan, France, Germany, Israel and the United Kingdom. On both the national and international markets, power generation and aerospace needs are the predominant end uses for Electralloy’s products. They also go into nuclear, automotive, agricultural and marine applications.

The client list reads like a who’s-who of major companies: Boeing, Rolls-Royce, Pratt & Whitney, General Electric, Westinghouse and Siemens are examples. Jack Simmons, manager of marketing and product development, states, “Electralloy continues to search for new avenues to service our customers and their industries with our custom-melt products. Our team is always ready to tackle the most difficult challenges.”

One out-of-the-ordinary client is the United States National Park Commission. The Korean War Veterans Memorial in Washington honors the men and women who served in that conflict. The principal feature of the memorial is a group of 19 statues, depicting a squad on patrol and portraying the experience of the ground forces in that “forgotten war.” This national monument was made from stainless steel supplied by Electralloy.

Electralloy is a world-class custom melter because it is flexible and diverse in its approach to the market, and committed to making the heavy capital investments necessary to maintain its position as a leader in state-of-the-art custom metal product. According to the management team, “our employees have made the difference at Electralloy. It is why we are at the front of the pack. They are the assets that have made Electralloy a success.”