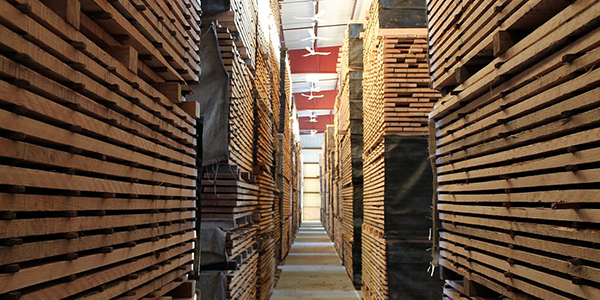 This is a company with grit in the face of adversity. Its pioneering spirit, coupled with unwavering perseverance, led it into territory uncharted by other producers of high-quality kiln-dried lumber. “We’ve always been avant-garde in our decisions regarding the direction of our company,” says John E. Read, Jr., vice president of international sales for Rossi American Hard- woods, headquartered in Cromwell, Conn.

Within just a few years, Rossi endured both a devastating fire at its flagship sawmill and what looked like the demise of its export business, representing a significant percentage of the company’s revenues. Carefully evaluating each event, the company chose to press forward even in the face of risk. It’s this keen sense of correctly reading the pulse of its industry that propels Rossi into its trendsetter role as a leading exporter of kiln-dried lumber. While the industry as a whole produces most of its lumber for consumption in North America, Rossi’s business model is unique in that its production is focused on a 50-50 domestic-export distribution.

A Balanced Business
“We try to keep our business balanced as much as possible between export and domestic production,” Read says. “This is very unusual in this industry and, in fact, we are one of the top five companies in the United States exporting hardwood lumber.” Rossi exports to over 40 countries worldwide – with a strong emphasis on Europe and the Far East – and it establishes local presences within those countries.

As with other industries that must adjust to the constantly shifting worldwide economy, Rossi found that its strong European furniture manufacturing market was drying up as that manufacturing sector moved to the Far East over the last five years. “This is a general trend in our industry and now more of our products are sold in the Asian market,” Read says. Rossi established offices in Shanghai, Taiwan, and Viet Nam and employs local personnel in deference to those countries’ national cultures.

When the value of the U.S. dollar began to drop against foreign currencies, Rossi faced a serious crossroads decision. “It affected our sales significantly because we were so highly leveraged on the export side – as opposed to the industry as a whole,” explains Read. “So what for us in the past was an advantage turned into a serious disadvantage and we had two very bad years – at the end of which we faced whether or not to continue our exporting business.”

As a result of the sagging U.S. dollar, Rossi American Hardwood went through a restructuring process, deciding to concentrate on its core business even in the face of these problems. “We have always believed strongly that export is an important part of Rossi’s business and we therefore decided to persevere with our philosophy of exporting 50 percent of our business,” Read explains. “In the past 12 months, this strategy has paid off in dividends as the dollar weakened again, so through a mixture of luck and good management we realize today that we did the right thing and today we are again competitive in the export market.”

Read credits Theodore (Ted) Rossi, president and grandson of founder Joe Rossi, with the vision to move the company into the exporting sector some 25 years ago. “It’s so important to keep our interests in both domestic and export because by spreading the risk, if there is a recession in America it tends to affect most of the country at the same time,” explains Read. “But it’s very unusual for all of America, Europe and the Far East to be affected at the same time. So by having some markets in each of those, that should help mitigate any bad recessions.” He adds that in just the last year, the U.S. dollar has dropped about 30 percent against all other major currencies.

Rossi links manufacturers and the wood they need through its understanding of the industry and its intuitive ability to connect manufacturers. For example, a Chinese manufacturer of wood products – a long-time Rossi customer – produces products for another Rossi client in England. “They came to me and said, rather than buying wood from Rossi and then having us ship it to England, they would buy it from Rossi CIF China and Rossi would send the wood directly to China, where the products would be manufactured and then sent on to England,” Read says, noting the shifting trend in the industry away from European manufacturing because of high labor costs.

“It’s these kinds of strategic alliances we believe will happen more and more in the future because we are very capable of linking overseas companies to all of our advantages,” Read says. “We expect future growth in this area and we are actively pursuing alliances such as these.” He adds that Rossi is currently searching for new opportunities to open more offices in the Far East to facilitate the expected growth in this sector.

Focus on Value
Rossi American Hardwoods built its reputation on producing value, not volume, Read says. “We produce the best possible products and we don’t want to be in the day-to-day jungle of price wars,” he continues. “This means we have to take more care in producing and in marketing our products.

“To be able to produce the best-quality products means we have to have the best in equipment,” Read says. The company’s sawmills are highly efficient workhorses. “Every last minutiae of the log are used,” he says. About 20 percent of Rossi’s output is in byproducts such as mulch, woodchips and sawdust.

Blue Triangle Hardwoods, Rossi’s flagship sawmill, suffered a destructive fire in the mid-1990s. Rossi had to decide whether to close it forever or rebuild and invest heavily into the latest in technologically advanced equipment. In its true winning spirit, it chose the latter option. “It was one of the country’s top state-of-the-art sawmills when we rebuilt it eight years ago,” Read says. The mill is computerized for production and operation optimization. “The computerized process also aids sawyers so they can optimize the cuts they have to make on the logs passing through,” Read says. The mill uses computerized scanners in the grading process and quality and yields have increased significantly.

Producing the gamut of commercial hardwoods, Rossi manufactures primarily hardwood kiln-dried lumber using woods such as red oak, ash, white oak, cherry, walnut, poplar, hard maple and soft maple. “We can also supply other minor hardwoods and Southern yellow pine, which is an expensive pine and tends to be sold in the same markets as these high-quality hardwoods,” Read says.

Rossi lumber is used by a wide variety of manufacturers to produce high-quality furniture, doors and kitchen cabinetry. It markets its products through a distribution network that usually includes a wholesaler, local distributor and final end-users. In some cases, Rossi also sells direct to domestic and foreign manufacturers.

Light in the Forest
More than likely, Joe Rossi might never have imagined when he started his wood pallet manufacturing company in 1925 that the company would evolve into the worldwide enterprise it is today. “The company is a lot more dynamic since Ted Rossi took over the company,” Read says. “There’s been a dramatic shift in the company over the last 30 years as Ted began buying sawmills and ventured into exporting our products.”

In addition to Blue Triangle, the company owns and operates two other sawmills: Scotland Hardwoods in Connecticut and Graham Lumber Company in Tennessee. Rossi’s two wholesaling divisions – Legacy Lumber Company in Pennsylvania, and Cross Creek Sales in Georgia – purchase green lumber from other suppliers and then dry that lumber, process and grade it and then export it. Rossi produces over 60 million board feet annually and wholesales a similar figure.

One of the benefits of Rossi’s wholesale divisions is its flexibility. “We can control how much lumber we will buy,” Read says. But sometimes Mother Nature undermines that flexibility, as she did this past year with the heavy rains. “Production in the industry as a whole went down significantly because it was tough to get the logs and we realized that if we wanted to expand we would have to develop more strategic alliances so we can have the green lumber when we need it.”

This strategy led Rossi to either develop other alliances or to prepare to buy small green mills with no kiln capacity. “We then produce the lumber in those mills and send the lumber to our larger mills,” Read says.

One of the reasons for its leading role in the industry is due to Ted Rossi’s major role in industry associations, notes Read. Ted Rossi is or has been on the board of three of the industry’s most important associations, including the National Hardwood Lumber Association, the Hardwood Manufacturers Association, and the American Hardwood Export Council. He will also lead as president of the newly created Hardwood Federation.

Recognizing its strength on the export side of its business outweighs its domestic presence, Rossi’s history of taking calculated risks has paid off well. “Opening offices in the Far East was a pioneering thing many companies in the industry didn’t even consider several years ago,” Read says. “And the idea of continuing to support the export market during hard times demonstrates our commitment to our core philosophy. A lot of people left the market during those times, while we hung in and came out winning.”