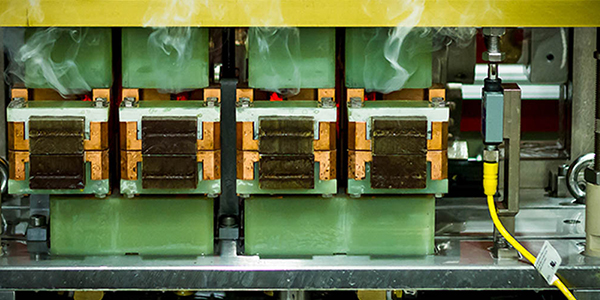 It’s like something from a science fiction novel – a surface heating technology that goes beyond visual perception and into the realm of electric pulses, and that’s capable of bending steel. But it is really much more down to earth than it seems. And without it, life in the modern world might be altogether different.

Induction heating is a technology that uses electricity to heat and ultimately strengthen metals such as steel. The process enables the manufacture of many useful components that the industrial age has made necessary. Companies like Michigan-based Inductoheat, Inc., harness this technology to create new induction-heating machines that fit the specific needs of a diverse set of industries.

According to Dale Mellon, group director of special projects and new processes, induction heating is as simple as the process that works a doorbell. Alternating magnetic fields, generating positive and negative charges that cause a current to go back and forth, are the basis of this technology. “What we do is use frequencies that are higher than 60 cycles. As we’re using this high-frequency AC signal, we create a magnetic field which, in turn, causes a current to flow inside the steel itself. This heats the steel,” Mellon says.

“We can do two things with the resulting heat,” he adds. “First, we can heat for the purpose of hardening. By controlling the power and frequency, we can control the depth of the heating current and then ultimately the hardness of the steel. We electronically control the heating time as well as the quenching fluid pressure and concentration, and have the ability to selectively harden specific areas of the metal parts.”

Hard Specifics
Inductoheat’s machines are built based on a given client’s needs. “The customer usually brings a part to see if we can heat-treat it to their specs,” Mellon says. “They give us a drawing of the hardened piece, and we design the machine to heat-treat that specific part. Some of these parts can weigh from a few ounces to 150 pounds and range from just 3 or 4 inches to 20 or 30 feet long. The cost of a machine can run from $100,000 up to several million dollars.”

Inductoheat prides itself on being recognized as the world’s largest manufacturer of solid-state power supplies and induction-heating equipment. It is one of the 24 companies in 14 countries worldwide that comprise Inductoheat Group of Madison Heights, Mich. – which itself is part of Inductotherm Industries, Inc. Inductoheat has established its niche in integrated systems designed around general-purpose machines, designed to reduce engineering and equipment costs.

“Ours is a success story, really,” says Inductoheat Chief Executive Officer Byron Taylor. “We’ve come from being one of the smallest induction-heating companies in Michigan to being now the world’s largest.” Two former competitors, General Electric and Westinghouse, sold off their assets in induction and dielectic heating. Where these companies bailed out, Inductoheat has consistently found ways to remain ahead of the pack.

SHarP-er Innovation
Recently, Inductoheat introduced a product derived from a revolutionary idea that stands to lead the induction-heating industry to yet another level. The company has introduced SHarP-C technology (stationary hardening process for crankshafts), a non-rotational induction crankshaft-hardening technology, to the automotive industry. Automobile crankshafts, pumps, compressors and such require the casting or forging of a series of components interconnected by webs/counterweights. The complex mix of requirements in making crankshafts has traditionally necessitated the use of overgrown rotational crankshaft-hardening machines, which have massive components often weighing more than 2,000 pounds. This bulk then must travel with the orbital motion of the crankpins, resulting in a design that is complex, noisy and sensitive – not to mention costly.

The SHarP-C technology offers a compact and stationary alternative solution. The technology simplifies the operation while adding reliability and maintainability. This machine takes up just 30 percent of the floor space required by the conventional method. It also shortens the heating time, which improves the metallurgical properties of the hardened zone by reducing grain growth, decarburization and oxidation on the surface. The method also leads to more consistent hardening profiles and superior hardening.

The first two of these machines have been sold to Ford Motor Company, and a third is already being built. This and many other Inductoheat innovations are presented at the company’s International Induction Heating Seminars, held every 18 months. During the seminars, the world’s largest group of experts from North America, Europe, Australia, South America and Asia present information on new developments and processes in induction heating.

Each of the companies in Inductoheat Group has its own specialty, but they are actually “friendly” competitors. In a way, it isn’t so far off to compare the capabilities of these and other companies making up the greater Inductotherm Industries to the capabilities of creative science fiction. Except these innovations with electricity are happening now, made possible by companies dedicated to improving product safety and quality through the efficient and better use of tomorrow’s technology today.