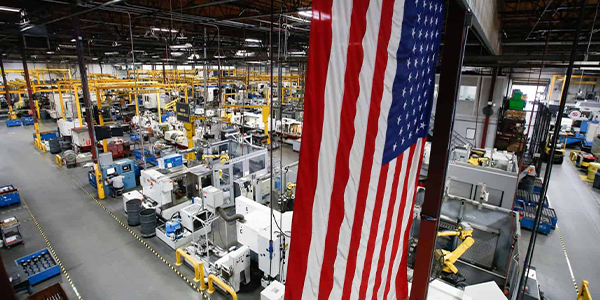 The Leonard study found that the cost disadvantage borne by manufacturers in the U.S. soared from 22.4 percent to 31.7 percent in less than three years. This statistic may be the most alarming one I have run across in my time as President of the NAM and, trust me on this, I have run across some truly scary data in this job.

Natural gas: Energy prices have gone haywire over the last year. They erupted in the wake of energy supply disruptions caused by Hurricane Katrina and have not returned to former levels. The big issue for manufacturers is natural gas prices because they consume about a third of the nation’s supply. Congress has enacted a series of laws encouraging reliance on natural gas because it is seen as more environmentally friendly than other fossil fuels. We use it for fuel and heating, of course, but many critical industries, such as chemicals and fertilizer, also use it as a feedstock. Unfortunately, federal policies prohibit exploration and development needed to keep up with rising demand.

A decade ago, U.S. natural gas prices were lower than for most of our major trading partners. No more. The new study says that natural gas prices in the U.S. are now higher than in the other countries. The run-up of natural gas prices added 0.7 percentage points to the overall excess structural costs. This denotes a sharp change from the earlier study because not so long ago U.S. manufacturers actually enjoyed a slight advantage in natural gas prices on a trade-weighted basis. No more.

Taxes: The corporate tax burden was both the heaviest in absolute terms and the largest contributor to the deterioration in the U.S. structural manufacturing cost gap, adding 2.0 percentage points to the U.S. disadvantage. There is a popular myth propagated by the political left and amplified in the media that industry is wallowing in tax breaks, but in fact U.S. business is more heavily taxed than companies in other countries. In this specific case, we lost ground because, while our corporate tax rates have remained basically stable in recent years, several of our trading partners – including Mexico, Japan and South Korea – continued to lower their corporate tax rates.

Some other issues were involved, such as Congress’ stubborn refusal to renew the R&D tax credit, a sin of omission with far-reaching implications for our economy.

The R&D tax credit expired at the end of 2005 and has not yet been renewed. In 2001, the latest year for which data are available, manufacturers claimed $4.2 billion worth of R&D tax credits and paid a total of $48 billion in corporate taxes. Thus, loss of the R&D tax credit is equivalent to a nearly 10 percent increase in the overall manufacturing tax burden. In any case, manufacturers in the U.S. bear a substantially higher tax burden than their competitors in other countries.

Employee benefits: Rising costs for health insurance and pension benefits added 1.3 percent to the structural cost gap between the U.S. and its primary competitors. Health costs continue to grow rapidly despite legislation designed to encourage consumer-driven health care, and a majority of defined-benefit pension plans remain under-funded. The soaring cost of health care presents something of a challenge in comparing to other nations because the U.S. is the only nation that relies primarily upon employers to provide health care to working people, and to also shoulder a major portion of the cost for pensions.

Pollution abatement: Regulatory compliance costs have continued to rise since publication of the 2003 cost study. The total regulatory burden on manufacturers is estimated at $162 billion representing an increase of 10.2 percent since 2000. Data in this category are somewhat speculative because the international sources on pollution abatement cited in the 2003 cost study have not been updated since its publication. However, assuming regulatory costs have remained fairly stable, the regulatory burden expressed as a percentage of manufacturing value added increased by 1.7 percentage points.

Even though the costs associated with litigation appear to be leveling off, thanks at least in part to aggressive legal reform efforts of the NAM and other organizations, they remain at historical highs, and are significantly higher than in other countries.

Every discussion of our burgeoning trade deficit elicits complaints about unfair trading practices of our partners in commerce – subsidies, tariffs, product counterfeiting, and currency manipulation – but very little reflection upon our counterproductive laws and policies that make manufacturing in the U.S. much more expensive – and less competitive – than it should be.

Three years ago, the National Assoc-iation of Manufacturers and the Manufac-turers Alliance/MAPI jointly published a path-breaking empirical study that compared the external structural costs of manufacturing in the U.S. to those of our nine largest trading partners. The specific structural costs addressed were corporate taxes, employee benefits (health care and pensions), pollution abatement, natural gas prices and litigation. The nine countries compared to the U.S. were Canada, Mexico, Japan, China, Germany, United Kingdom, South Korea, Taiwan and France.

The study performed by economist Jeremy A. Leonard concluded that these external costs added the equivalent of nearly $5 per hour worked, or 22.4 percent, to the cost of doing business in the U.S. compared to the other nine countries. This report, How Structural Costs Imposed On U.S. Manufacturers Harm Workers and Threaten Competitiveness, generally referred to as the “cost study,” has generated extensive comment in the media and helped lay the groundwork for consideration of more pro-manufacturing policies and legislation.

Many factors suggested to us that these external costs were actually larger than originally reported, and that subsequent events, such as the post-Katrina run-up in energy prices, were exacerbating the problem. So we contracted with Leonard to update the study.

The new study, The Escalating Cost Crisis, confirmed our concerns that the external costs of doing business in the U.S. have increased – dramatically – further undermining our competitiveness. In sum, it is clear that despite considerable progress that we’ve made over the last couple of years, we continue to shoot ourselves in the foot with laws and policies that undermine our competitiveness in the global marketplace. Were it not for this large and growing cost disadvantage, we would be more competitive than most of our nine major competitors, and more attractive to capital investment in manufacturing.

While the earlier cost study helped raise awareness of the problem, the grim fact is that the situation has actually worsened over the past three years – mainly because our political leaders continue to dither and dawdle. But we are contending in the most competitive global marketplace in history. While they dither and dawdle, we’re losing ground both at home and abroad.

John Engler, former three-term governor of Michigan, is President and CEO of The National Association of Manufacturers. Visit www.nam.org