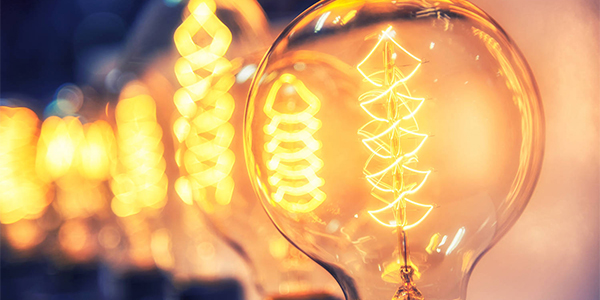 The next time you turn on your office lights, think about your stock price. The connection between the two is indisputable. Controlling lighting and the energy it consumes can help boost stock price and produce an unbelievable ROI. So late at night, when you think you’ve exhausted every conceivable way to support the stock, think again. Look to lighting. Unfortunately, not enough executives do. It’s a fixed cost, they think. Not much they can do about it. And after all, it’s a maintenance issue.

It’s anything but…
Energy accounts for about 30 percent of a typical office building’s costs and is a property’s single largest operating expense, according to statistics released by Energy Star, a program created by the U.S. Environmental Protection Agency (EPA). Lighting represents a significant – and controllable – part of that expense.

The magnitude of the issue becomes clear when you consider there is more than 71 billion square feet of commercial floor space in this country. Most of it is not illuminated with energy efficient lighting, so the opportunity to save money is nothing short of enormous.
The EPA reports that businesses participating in its Green Lights initiative enjoy annual rates of return of more than 30 percent when they retrofit lighting systems with energy efficient technologies. Where else do you get that kind of return?

The total potential savings that businesses participating in the program could realize tops 65 billion kilowatts of electricity, or $16 billion in energy costs annually.

Indeed, a U.S. Department of Energy (DOE) and Rocky Mountain Institute (RMI) study reports that, in general, lighting energy requirements could be cut by at least 50 percent in most U.S. commercial buildings. If that’s not enough, studies show that better quality lighting can improve employee productivity. And since the U.S. Green Building Council reports that employee costs represent about 90 percent of a commercial building’s total cost over a typical 30-year span, even small incremental increases in productivity can surpass total energy savings. That can help the bottom line and stock price in a hurry.

The notion of better lighting boosting productivity isn’t wishful, pie-in-the-sky conjecture. The DOE/RMI study includes results of energy efficient lighting projects at five divergent facilities. Aircraft giant Boeing, a Green Lights participant, reported fewer defects and a 53 percent return on investment after installing efficient lighting. Productivity at a Pennsylvania Power & Light drafting facility shot up 13 percent, while absenteeism dropped 25 percent. And a Wal-Mart store that had daylighting installed in one half of the facility experienced significantly higher sales in the half with daylighting. The Wal-Mart example is especially pertinent because if there’s a hot trend in lighting it’s daylighting. If you consider sunshine a raw material, then daylighting is the finished product. It’s the effective management of sunshine for the benefit of occupants in an enclosed environment.
Daylighting further reduces the amount of energy and operational costs required by even energy efficient electric lighting. Energy savings compound with daylighting because some innovative daylighting technologies, such as the one marketed by Nature’s Lighting, actually enable electric lighting to be turned off during the day.

Since electric lighting can represent 40 to 50 percent of a building’s total energy consumption according to the Green Building Council, turning off lights makes a big dent in a company’s utility bill. The savings compound because when electric lights are off, they’re not generating waste heat that has to be removed by a building’s air conditioning system. That saves an additional three to five percent in total energy consumption.

Properly designed daylighting can reduce energy consumption for lighting by 50 to 80 percent, according to the Council. Nationally, commercial and industrial lighting and the heat removal required to maintain an even temperature consume an estimated 15 to 22 percent of total U.S. energy production.

Sobering statistics to be sure, but ones that have a silver lining for executives. Those wanting to squeeze cost out of operations and are willing to pay attention to the importance of lighting to their businesses can achieve significant gains. As a founding Senior Vice President of Federal Express, I worked with a team that learned how to wring cost out of operations and optimize productivity. When the company’s first overnight shipment consisted of two paid packages, nothing was off limits. At the time, energy efficient lighting wasn’t much of an option. Too bad, because we would have welcomed its contribution. But today, it is very much an option.

Many Benefits
I believe in it so strongly that I joined Nature’s Lighting to apply lessons learned at FedEx to this company and the lighting market. They’re similar dynamics, just different circumstances. It still requires convincing companies to switch from something they take for granted (traditional lighting) to something new and innovative (daylighting). But acceptance will come because the cost of energy will continue rising and daylighting’s benefits will draw converts. Besides cutting costs, another daylighting benefit is environmentalism. Executives wanting to project environmental friendliness can claim added benefits of reducing pollution that would otherwise be produced by generating electricity. Expanding daylighting’s role in illuminating buildings could reduce total national electricity consumption by 6 to 9 percent, according to the Council.

Daylighting also creates a healthier, more stimulating work environment. A technical report by the National Renewable Energy Laboratory (NREL) shows properly designed daylighting decreases the incidence of headaches, seasonal affective disorder and eyestrain. Studies report that 75 percent of employees surveyed prefer daylighting over electric lighting. It shows in their performance. Daylighting can increase worker productivity by up to 15 percent. Two studies conducted for Pacific Gas and Electric prove the point. In one study, a number of chain retail stores were fitted with daylighting and others were not. Results show that stores with the daylighting would have 31 to 49 percent higher sales, compared to those stores without daylighting.

The other study looked at the performance of elementary school students in classrooms with and without daylighting. Bottom line, students in classrooms with daylighting learned faster than those in classrooms with only electric lighting. Improved visibility, enhanced mood and more attention from sales clerks and teachers were reasons attributed to the difference in the studies. The NREL reports that employees at a VeriFone, Inc., Worldwide Distribution Center near Los Angeles, California increased their productivity by 5 percent and total product output by 25 to 28 percent. They also reduced their absenteeism by 6.8 hours per person per year. Benefits are so significant to employees that many countries in Europe require that workers be within 27 feet of a window. It’s clear that daylighting and other energy efficient lighting technologies offer real opportunities for executives to support their companies’ stocks. Reducing operating costs and boosting employee productivity are proven ways to do that, especially in these times of intense competition where every advantage counts.

Energy efficient lighting products are tested and their performance proven. Giants such as GE offer many energy efficient lamps. Smaller companies, like Nature’s Lighting, offer innovative products that capture sunlight from nearly dawn to dusk, even through long winter months when the sun sits low in the sky. Executives ought to consider energy efficient lighting, including daylighting, as a tool in their arsenal. It can strengthen their company and support stock. Good resources for their managers to research are Energy Star, the U.S. Green Buildings Council, Energy Information Administration, Leadership in Energy and Environmental Design and state and electric utility energy efficiency programs that all are accessible via an Internet search engine.

Michael Basch is chief executive officer of Nature’s Lighting, an advanced daylighting systems company. He also is a founding Senior Vice President of overnight shipping giant Federal Express. He is applying the business practices used to grow Federal Express to build Nature’s Lighting into a market leader serving the commercial need for quality and energy efficient daylighting. His email is mbasch@natures-lighting.com.