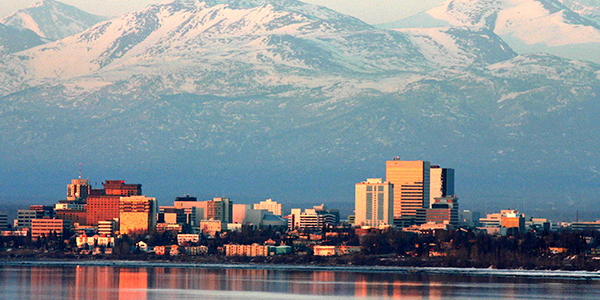 Relying on sales of Rolex watches and cosmetics was not to help the Ted Stevens Anchorage International Airport overcome a slump in duty free revenue that occurred when it was eliminated as a main stopover between Europe and Asia.What to do when you know your hub is at the proverbial crossroads to the world… but no one else does? You launch a campaign that convinces some of the biggest cargo companies that they can actually save time and money by shipping from, of all places, Alaska.

Remembers Robert Poe, director of the Anchorage Economic Development Corporation (AEDC) and former deputy commissioner of the Alaska Department of Transportation, responsible for both of Alaska’s international airports, Anchorage and Fairbanks: “When the 747-400, the MD 11 and the A340 came out, passengers could now fly non stop between Europe and Asia so they didn’t need to stop in Anchorage. We had a few years of transition time, but it was clear that soon we would lose most of our international passenger traffic and therefore most of the duty free revenues.”

And that revenue was substantial: The duty free store, which sells liquor, cosmetics, apparel and other items, took in about $120 million each year; out of this the airport was able to keep $40 million. These revenues paid for most of the airport operations in both Anchorage and Fairbanks.

“That is when we set out to market Anchorage to cargo companies,” Poe relates. “We initially focused on three: Flying Tigers because we already had some of their business and wanted more, FedEx and UPS.”

In addition, the airport launched a marketing effort called the Santa campaign in which the top 50 shipping companies were sent a Christmas card and a map. “We said let us show you how you can get to St. Louis from Japan in half the time by coming through Anchorage and driving down; it takes 15 days from what would usually take 31 days. If you place a compass on Anchorage and stretch out nine hours in jet time, that encompasses 95 percent of the industrial world.”

Indeed, FedEx Corp. has seen many benefits since establishing its FedEx Express Anchorage hub. “A big bulk of Asia traffic comes through Anchorage,” says Mike Higley, managing director of Alaska operations for FedEx Express; in fact, all products bound to Asia from South and North America funnel through Anchorage, and by all accounts, Asia is the bounty precipitating the soar in FedEx’s stock price.

“We see 400 cargo flights a month,” Higley adds. With a facility on the north side of the Ted Stevens Airport measuring 500,000 square feet, FedEx has indeed reaped many rewards since locating in Anchorage, and the region has proven itself a multi-dimensional asset, Higley adds. “This is an amazing state. It’s unbelievable from a family business and growth point of view. It’s a great and diverse area; a melting pot of folks from all over the world.”

Dowland Bach is another player that has seen its business well positioned in Alaska. Among its many products are wellhead safety systems and instrumentation controls for the oil industry that act to maintain stability in the instance of a breach in the line, the company’s expertise came in handy when oil started flowing in Alaska because no one in the world at that time was able to make a system that would withstand the Arctic blasts that sometimes reach 60 below zero.

“Sometimes I feel as though we’re on the frontier,” says Dowland-Bach President Lynn Johnson. “Living in a place like this surrounded by wilderness allows you to attract and retain people; it attracts adventurers and achievers and we want the achievers.”

A not-so-silly deal
Long ago nothing more than an outpost, Anchorage was discovered by Russian explorers and during the next 100 years Russian trading activity and cultural influence increased. Then in 1867 problems at home in the aftermath of The Crimean War forced the sale of Russian America to the United States for a sum of $7.2 million.

Poe recalls that in 1988, as Alaska began to reopen relations with Russia, a chief spokesman for Mikhail Gorbachev made note of the sale in his speech, saying: “The reason for the October revolution was that the czars kept doing silly things, like selling Alaska to the Americans.” But the Americans – the vast majority – seemed just as silly at the time, calling the sale “Seward’s folly” after Secretary of State William H. Seward who initiated the agreement. Few could fathom what possible use the remote, 586,000 square miles of land, would have for their country.

And time has proven that this perspective was, indeed, silly, especially after oil began pumping through from the North Slope in the 1980s, making Alaska – it became the 49th state in 1959 – a major source for crude in North America. Businesses in Anchorage benefit because of the flood of oil revenue into the state treasury: there is no city sales or income tax. “Eighty percent of state revenue is from oil, and as the money gushed out Alaska saved half of it,” Poe says. As a result Alaska maintains a permanent fund totaling $28 billion, a well-planned strategy, given that the oil won’t last forever.

Life after oil
In the last 20 years, Anchorage has worked hard to diversify its economy from a heavy dependence on resource extraction to one that includes more sustainable industries. AEDC is charged with being the catalyst and, says Poe, sometimes this means dispelling popular notions about the state.

“I spend most of my time when outside of Alaska dispelling preconceived notions; people want to know if it’s really dark all the time (no) and they’re always surprised to learn about the size of the cities.” In fact, he adds, more than half of the state’s population resides within Anchorage and its suburbs.

Also trying to alter long-held attitudes about Anchorage is Kevin Bruce, the port’s director of communication business development. Bruce wants to get the word out that Anchorage has available capacity, which should be attractive to Asian shippers, especially in light of the overload experienced at the busier West Coast ports. “It’s harder for people to conceptualize that we’re a good entry port. People don’t think we’re open all year but we’re open every day and we can clear people faster.” The port, he adds, is in the middle of a six-year, $350 million expansion project, which will double the size of the facility and add 135 acres.

Bruce adds: “The Port of Anchorage is the third busiest port in the world, handling 90 percent of goods consumed by Alaskans. We finished 2004 with a 4.9 percent growth in tonnage.”

To anyone wanting to share in that growth, Poe also has this to say about Anchorage: “This place is filed with people who want to be here. The quality of life is immeasurable.”