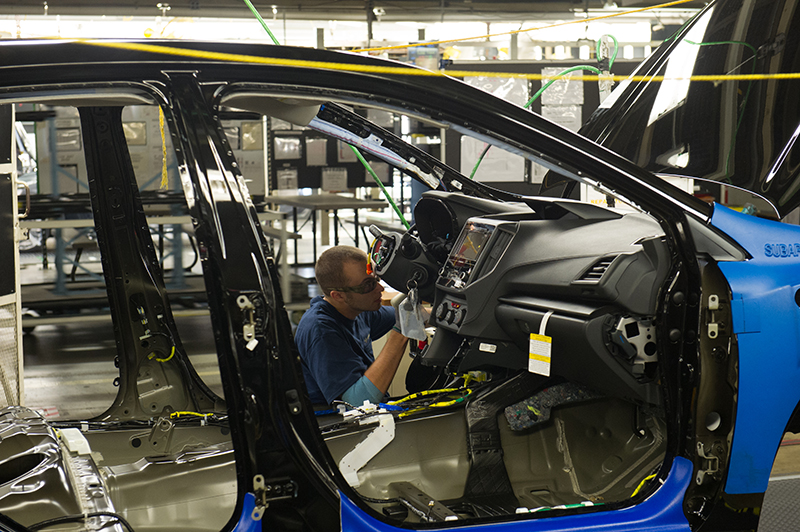 The manufacture of Subaru automobiles, unarguably in a class by themselves, moves forward at a rapid pace at Subaru of Indiana Automotive (SIA), with the addition to its portfolio in 2018 of the company’s new Subaru Ascent.

The Ascent will be produced in the Lafayette, Ind., plant beginning in May 2018. To support the increased production, the company plans to create up to 200 new jobs, adding to its current workforce of 5,600 and strengthening SIA’s status as a major employer and community leader in Lafayette.

“The Ascent was designed for the North American market to meet the demands of our customers,” notes Senior Executive Vice President Tom Easterday, adding that Subaru’s vehicle lineup in North America previously was missing a key market segment: customers who wanted a 3-row SUV. The Ascent offers plenty of everything: room for up to eight passengers, increased cargo space, leg room and head room, a state-of-the-art entertainment system and 19 cup holders. Perhaps not as sexy as the Direct-Injection Turbocharged, 260-horsepower SUBARU BOXER® engine or STARLINK™ Multimedia technology, but cupholders are nonetheless important if you’ve got a big family on long drives. And Subaru is nothing if not a company that prides itself on supplying the best to the customer – down to every last detail.

At the time the announcement was made of the company’s newcomer to its production line, Easterday had said that the Subaru Ascent was a “great addition to our production mix. This great new family vehicle allows us to create hundreds of new jobs at SIA, and also at our suppliers in Indiana and across the country.”

As far as physical renovations to the Indiana plant, Easterday explains that the company will not add on to the main plant at present, noting that an addition was previously built onto the paint shop by knocking out a wall to allow to allow for production of larger vehicles. The plant currently measures 4,419,093 square feet. That amounts to a 3.3 million square foot imprint and a lot of space for the efficient production of automobiles.

As an incentive, the Indiana Economic Development Corporation offered Subaru of Indiana Automotive Inc. – the company’s only plant outside of Japan – up to $500,000 in training grants based on the company’s job creation plans.

The expansion in production represents an investment of more than $140 million in the purchase of new machinery and equipment. SIA will produce approximately 400,000 vehicles in 2018, including the Subaru Legacy, Impreza, Outback and Ascent. Since the start of the company’s production in September 1989, the facility has produced more than five million vehicles.

So what’s there to like about the 2018 Subaru Ascent? Everything.

Heralded as “the biggest Subaru SUV ever,” the Ascent offers a Direct-Injection Turbocharged, 260-horsepower SUBARU BOXER® engine designed for optimal balance and an even distribution of power for maximum traction. And it drives nice, too.

“It has more towing capacity than many other SUVs. It offers a smooth ride and better fuel economy,” Easterday says.

The Ascent also comes with standard Symmetrical All-Wheel Drive that offers great stability, efficiency, and enables the driver to respond quickly to changing driving conditions. With 19.3 gallons of fuel capacity, it offers drivers the chance to reach their destination with their wallets intact.

What else can customers look forward to? Heading out on rough terrain, drivers can rely on the vehicle’s 8.7 inches of ground clearance and standard X-MODE, which optimizes the Symmetrical All-Wheel Drive system for maximum traction on slippery surfaces. X-MODE also incorporates Hill Descent Control for stability when climbing difficult grades. If you’ve brought your boat or other recreational vehicles along, you’ll be ably to rely on the Ascent’s 5,000-pound towing capacity, along with a Class III trailer hitch and a wide selection of Thule racking accessories. The Ascent is also one of the only vehicles in its class with standard raised roof rails and offers an extensive line of racking accessories — from kayak and bike carriers to rooftop containers.

In terms of driving safety, the Ascent has you covered. “Subaru safety is the best in the industry,” Easterday says. Coming in as a standard feature is EyeSight technology that monitors traffic movement, optimizes cruise control, and warns you when you’re swaying outside your lane. Other features of the 2019 Ascent include:

After giving peace of mind that the family’s safety is taken care of, the designers of the Ascent next focused on comfort and the 2019 vehicle provides that in triplicate. Three rows of seating provide optimum comfort for long trips. Passengers can opt for second-row captain’s chairs for easy access to the third row and space for up to seven, or second-row bench seating to make room for eight. The interior features 72.6 cubic feet of available cargo space and up to 153.5 cubic feet of passenger volume plus underfloor storage.

With all those passengers, you’ll need something to keep them entertained. The 2019 Ascent offers built-in Wi-Fi connectivity, up to eight USB ports as well as SUBARU STARLINK™ Multimedia that integrates Apple CarPlay™, Android™ Auto, and Pandora® plus SiriusXM® All Access Radio. STARLINK connects passengers to music, navigation, and podcasts, plus allows easy access to apps and content, such as iHeartRadio®, Yelp and Magellan. A built-in, voice-activated navigation system powered by TomTom® and an 8-inch touch-screen are also available.

Whew! Is there any wonder, with such built-in excellence and appointments, that 98 percent of Subaru vehicles sold in the last 10 years are still on the road today? The Ascent will no doubt add to that percentage as it circulates among drivers in North America and beyond. Currently, exports represent 5-7 percent of the company’s production volume, Easterday says.

To enhance the pace of production in its plant, Subaru has made a host of investments in terms of robotics in the areas of boxing and sequencing, accommodating for the larger vehicle size on the production line and other automated features, representing a $110 million investment in equipment and $30 million in building improvements.

Overall, SIA production volume has more than tripled in the last decade, reaching 350,000 in fiscal year 2017, which ended March 31. In December 2016, SIA rolled out its five millionth vehicle, a blue Outback, and the previous July, Subaru’s Indiana facility marked production of its three millionth Subaru. SIA currently produces only Subarus for the North American market, including Outback, Legacy and Impreza and has exported vehicles to more than 50 countries worldwide. In addition, SIA’s supply chain is an integrated network of 38 direct material suppliers located in Indiana and 140 direct material Subaru suppliers located in Indiana and the surrounding states of Michigan, Illinois, Ohio and Kentucky.

With 30 years in Indiana, the company’s plant employs two production lines to build the Outback, Legacy and Impreza, utilizing kaizens, new technologies and best practices to bring efficiencies to the manufacture of these vehicles – a business model that will no doubt extend to the Ascent.

To enable the proficient manufacture of all vehicles for Subaru, and to continue to ensure best practices while providing employment to the region, SIA participates in a military-to-hire program through the army at Fort Campbell in Kentucky and Indiana’s national guard and reserves, to identify potential new associates. Another program, AIM (Advanced Internship in Manufacturing) is offered to local high school graduates as a way to combine college-level classroom study with hands-on experience. Through this effort, students take classes through Vincennes University and Purdue University at the Purdue Polytechnic Institute-Lafayette campus, located at the SIA plant, to earn an associate’s degree in Computer Integrated Manufacturing.

The company has gone far to pursue a commitment as a major job maker in the region – in four years it has added more than 2,000 jobs.

So, as it has done since its founding, Subaru continues to push the envelope in both technology, safety and comfortable vehicles for its passengers and drivers, while providing jobs and career skills to the citizens of Indiana. As Easterday attests: “People maintain a close connection with Subaru – it’s a trusted brand in terms of safety and reliability.”

And that is why SIA will continue its ascent with an all-star lineup that includes the best manufactured automobiles on the planet.