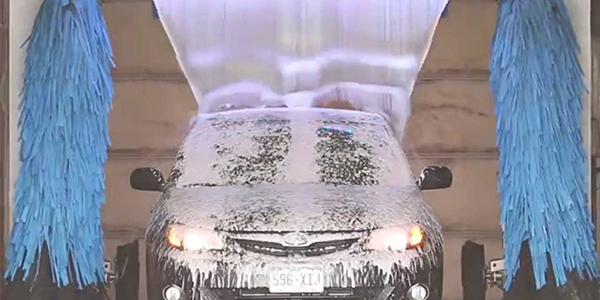 Harry Matthews began selling his car wash parts in Colorado during the 1960s, during the era of the car. Drive-thrus, drive-ins, national highway systems, the garage – they had all come together as the housing market boomed and automobile ownership grew in proportion to the number of driveways being carved out in new suburbia.

Of course those cars needed to be washed. And Matthews found he was in the right place at the right time. His business, Mark VII, thrives today as Americans continue their love affair with the automobile, helping to make the car wash an attractive investment opportunity. Says Craig Campbell, director of marketing for Mark VII Equipment Inc., which has, in the last 30 years, become a premier manufacturer of touch free self-service and in-bay rollover car wash systems, a car wash can bring owners a lucrative return within a short period of time.

Take the company’s AquaJet GT™ series of high-speed, touch-free rollovers designed to accommodate a variety of wash sites and budgets. The GT, or Gantry Technology, family of car washes features the AquaJet GT-500 and AquaJet GT-700, engineered for “superior cleaning and reliability with low operating costs.” On the average, this system sells for $100,000 a piece, Campbell says. “The pay out from the investment could occur in 14 months if you have the volume,” he adds, meaning operators could gross anywhere between $12,000 to $20,000 a month.

“An investment in a car wash is a great investment, either self-service or combined with automatic,” Campbell says. “It’s fairly recession proof.” In fact, he adds, the industry remains attractive on both the investor and supplier side. “New ideas have amazing impact; it’s a very old school technology.”

The Touch Free experience
These statistics are aligned closely with both the volume of cars and weather patterns. Denver is good car wash country, Campbell says, because a snowstorm could be followed quickly with sunshine. Perhaps this is what Matthews realized soon after founding his business in 1966. Matthews was selling car wash parts out of his truck to retail petroleum operations (gas stations) which, years ago, were the only sites for car washes. Drivers were offered a free wash with a fill up.

Matthews, says Campbell, had hit slow times in Colorado but eventually amassed enough to buy a car wash and decided to build his own equipment. He was in business for a while but with the 1970s came oil embargoes, and doldrums for extended car use. “So he’d load up his car with a partner and spend weeks at a time selling parts,” Campbell says.

How the company grew to its current configuration of more than100,000 square feet of manufacturing space with 200 employees occurred in the mid 1980s, when Matthews saw opportunity within the touch free car wash segment (nothing touches the car but the soap and water). Tax changes and the lack of incentives had by that time hurt the car wash business, specifically self-service, so Matthews, decided to push into the in-bay (automatic) touch free car wash business and began producing touch free parts. In the 1990s he was able to convince retail petroleum that the car wash could also be a capital opportunity for gas station owners, whereupon they began charging for the privilege. Car owners continued to happily line up for a wash and between 1988 and 1998, Mark VII’s market share grew from less than 1 percent to an estimated 35 percent of the global touch-free car wash market.

Touch free subsequently became a huge boon to the industry. “He sold retail petroleum on the idea that touch free was safe,” Campbell said. “It became a huge part of the company’s success.” Today, the split on touch free preferred over friction is 90-10, Campbell says, up from maybe 40-60 at the beginning of the decade.

In what he describes as a “fragmented market,” Campbell says, Mark VII still currently enjoys a 30-35 percent market share. The company’s strategy, he adds, “is to look at the marketplace and our vision is to become more of a sought after supplier of solutions.”

Following in Matthews’ footsteps, Mark VII (sold in 1996 to Goldner Hawn Johnson & Morrison, a Minneapolis investment group focusing primarily on U.S. manufacturers of consumer and industrial products and B2B service providers) continues to produce and market a complete line of car wash solutions. These include touch-free rollover, tunnel and self-service systems, as well as chemicals, ancillary products and service agreements. All systems are backed by comprehensive warranties, Mark VII factory support and an international distribution network.

Two giants form alliance
Among its newest successes is the company’s strategic partnership with Wesumat Cleaning Technologies, a wholly owned subsidiary of WashTec AG of Augsburg Germany. The agreement formed the first truly global alliance in the car wash industry and created world-class competition in the friction segment of the U.S. car wash market. Under the agreement, Mark VII has become the exclusive U.S. distributor of Wesumat friction car wash systems. WashTec is the largest car wash manufacturer in the world, with market share of over 50 percent in Europe and 30 percent worldwide. The company has more than 28,000 machines operating globally and has earned the status of possessing the safest, most advanced friction technology in the world.

Rick Green, Mark VII president and CEO, says the partnership will enable the company to serve the entire U.S. customer base with all categories of car wash technology. “The addition of a superior quality friction product to the Mark VII superior service network will allow us to serve global customers with a seamless offering,” he notes. “Our decision to integrate advanced German technology along side our own advanced product offering creates a new, full line of top products in both touch-free and friction. This agreement also furthers our number one strategic priority of strengthening our distributor network.”

AquaJet GT
The products in the Mark VII lineup receiving most of the attention today are the AquaJet GT™ series. Says Campbell, both models in the series use common components and a simpler design for increased dependability and ease of serviceability, while providing wash operators with more flexibility to optimize their washes to cleaning conditions.

“The gantry platform allows the same superior cleaning capability in both machines while other variables such as speed, water efficiency and add-ons can be tailored to the needs of individual operators,” he says.

The advanced engineering of the AquaJet GT series combines gantry technology and turbo boom control. Sensors in the gantry closely follow the outline of the vehicle allowing for slow calibrated cleaning of surfaces. High-pressure turbo nozzles adjust for optimal front and back surface cleaning, a combination especially effective for SUVs. In addition, programmable software allows operators to customize the number of gantry passes and wash options.

In addition, the AquaJet GT-500, is ideal for average-volume sites. Its streamlined design and modular components were designed for ease of maintenance and maximum uptime. Standard features include a presoak heater, enhanced side turbo nozzles, rocker panel blasters, and high-speed bifurcated soak; a variety of revenue-generating options can be added. When comparing speed, operating costs and wash quality, the AquaJet GT-500 is competitive with every other touch-free rollover in the industry.

The AquaJet GT-700 is a premium machine built for high-volume sites in which fast throughput is essential. Operators can customize the machine by selecting up to 10 speeds of wash, pass and profile zone. The AquaJet GT-700’s advanced profiling sensors read the size of the vehicle, then adjust boom position and water pressure for maximum speed and cleaning capability.

In addition, rocker panel blasters and efficient low-pressure clear coat have been integrated into other cycles to completely eliminate two gantry passes. The result is a substantially faster, superior-quality wash using 19 percent less water than the AquaJet GT-500.

“The combination of higher customer volume, enhanced cleaning and reduced operating expenses provide the operator with a powerful return on investment, which is really why most of our customers invest in car washes,” Campbell adds.

Built to last
Mark VII’s car wash equipment is built using stainless steel, the most durable and strongest material to use when constructing for highly corrosive environments like car washes, Campbell says. To minimize waste and to ensure frames and internal system components are built with precision, Mark VII has installed CNC machines in its facilities. Once engineers design a wash system, CNC machines are programmed with the proper design parameters to ensure a seamless transition to the manufacturing process.

Mark VII has the added distinction of being the first company in the car wash industry to use state-of-the-art laser cutting machines in its manufacturing process. This, says Campbell, further enhanced the quality of the company’s car wash equipment.

Mark VII also is a vertically integrated company for optimum control of costs and quality. From Campbell’s perspective, vertical integration increases the company’s ability to respond to customer requests and allows it to support new and old systems with necessary component replacements. It improves flexibility and allows Mark VII to quickly implement equipment upgrades and improvements. “Because of Harry’s investment in the past we have the benefit of a state-of-the-art factory,” Campbell says.

The company can also count itself among the major players in an industry in which the most important product, at the end of the line, is a clean, shiny automobile.