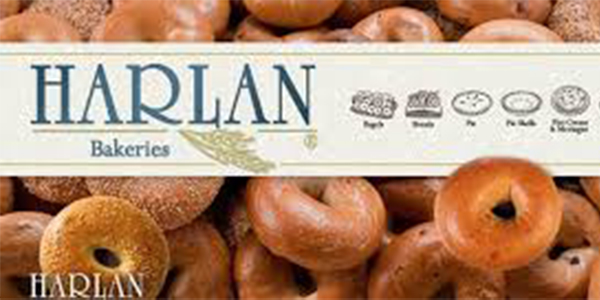 In 1991, 25-year old Hugh P. Harlan and 22-year-old Doug H. Harlan set out to introduce bagels to Indianapolis through a chain of delis. Although bagels had a stronghold on the East Coast and were in vogue in California where the brothers spent much of their youth, the bready orbs were still a novelty in Indianapolis.

“People in Indianapolis would ask, what’s a bagel? In 1991. Imagine that!” says Hugh Harlan. The Harlans opened two retail stores – both called Harlan’s Bagel & Deli – intending to expand from there. At night, they cleared the furniture from the front of the stores and used the space to package extra inventory for delivery to supermarkets. The supermarkets kept increasing their orders, and in 1992, the Harlans built a commissary to produce bagels for wholesale customers and their delis. By 1994, wholesale demand escalated to the point at which the brothers decided to discontinue the retail stores and focus on the wholesale side under the name Harlan Bakeries, Inc.

It was a good decision. Today coffee stores have replaced bagel shops as the latest craze on city streets. But business is booming on the wholesale side. Harlan Bakeries has grown into a diversified company supplying frozen dough, bagels, pie, cookies, and ready-to-bake muffins to in-store bakeries, national food service accounts, and contract manufacturing customers. The products are in 6,000 McDonald restaurants, 550 Einstein and Manhattan Bagel shops, all Steak ‘n Shake restaurants, Gordon Food Service, as well as retailers. The company, which offers certified Kosher goods, has increased production from 600-800 bagels per day to more than 2.6 million bagels per day. It has branched into pies, cakes, cookies, and muffins. And it has grown from roughly $30,000 a month in revenues to over $100 million annually.

The rapid growth has landed Harlan Bakeries for seven years in a row on the top 100 list of Indiana high-growth companies as selected by the Johnson Center for Entrepreneurship and Innovation, part of Indiana University’s Kelley School of Business.

“We always try to react quickly, to give the customers answers and solutions rapidly. If a customer wants a change in a product, we want to do it right away. Larger bakeries may take too long to make a decision because they have to run everything between committees and board. But between my brother and me, we can make a decision quickly,” says company President Hugh Harlan.

A specific cookie
This nimbleness has helped give Harlan the flexibility to adapt to market changes and win new business. A key focus for the bakery is retail-ready baked goods for in-store bakeries. In the past few years, supermarket chains have increased the attention spent on their bakeries. But training in-store bakers in the specific art of making, for instance, a fresh creme pie, is costly. And keeping small amounts of specialty ingredients on hand is expensive too. Those stores are a growing customer base for Harlan’s frozen-baked goods. Also, many stores have ovens on site and provide fresh-based goods but prefer to buy dough and batter mixed and measured to ensure consistent results and portions. For these customers, Harlan offers bake-ready products such as frozen muffin dough pre-deposited in muffin cups.

“The stores just bake the batter, and you can’t tell the difference from muffins made from scratch, except for the consistent high-quality and uniform size,” Harlan says.

Providing these stores with bagels and baked goods is not just a matter of selling a final product. In most cases, the stores have a specific cookie or muffin in mind. Harlan’s test lab, staffed by people with degrees from the American Institute of Baking and years of industry experience, match the sample in terms of flavor and texture. Taste-test panels then sample the prototypes. After acceptance, the item gets produced in high volume to make sure the final result matches the test version.
“Sometimes we can run a cookie 15-20 times before it’s right, and sometimes we get it on the first or second try,” Harlan says.

It is this ability and willingness to perfectly formulate a specified result that has helped Harlan Bakeries win its prize accounts. In 1997, McDonalds had developed a bagel in its testing kitchens and needed a manufacturer that could exactly match the bagel’s attributes. Existing bun suppliers couldn’t match the sample. Harlan, which joined the face-off late in the game, matched the bagel’s specifics on the first try and won the business to supply roughly 60 percent of McDonalds’ U.S. stores. “We were very excited, we were one of the first new bakers in McDonalds in over 15 years,” Harlan says.

Largest line
To produce bagels in the quantities needed, Harlan has developed a highly automated process. Bulk ingredients such as flour and sugar arrive at its main plant in Avon, Ind. by rail then tanker truck to the plants, where they are stored in 110,000-pound silos. The goods are transported to weigh hoppers by pneumatic conveyors or pumps, then dumped into mixers. Some specialty ingredients, such as blueberries for blueberry bagels, are added by hand to the mixers.

Mixed bagel dough is emptied into a trough, where it is elevated and sent through machines that divide the dough into portions, typically 4 ounces per bagel. The portions go through a bagel-former. Baked bagels proceed though tunnel ovens, cool off in cooling spirals, and then get packaged. The frozen and baked goods travel through a large, circular conveyor that blast-freezes the product to -10 degrees Fahrenheit, locking in freshness. This process runs 24 hours a day, five to six days a week, producing more than 6,800 to 7,500 dozen bagels per hour. The frozen goods are stored in mammoth freezers and shipped via freezer truck.

“I’ve been told we have the largest single bagel line in the country,” Harlan says. Harlan Bakeries is both expanding its bagel business and expanding its product line through acquisitions. Looking to diversify its product line, in January 2000, the company acquired Kyger Bakery Products, a regional producer of cakes and meringue and creme pies in Lafayette, Ind. In 2002, the company acquired A.C.E. Baking, a Denver Colo.-based bagel producer to expand capacity and reduce distribution costs to customers in the western U.S. The company also partnered with Apple Valley Foods in Kentville, Nova Scotia, to add fruit pies to their line.

Last year the company added a flexible production line for cookies and pre-deposited muffins to its Avon plant. A centralized information technology system was installed to track everything from supplies to fulfillment. New wireless computers and a bar code scanning system has helped reduce load times from an hour and a half to roughly 40 minutes.

Other projects underway include a rail spur so bulk supplies such as flour can be transported directly to the Avon plant, a $4.5 million freezer expansion to increase capacity to 9,000 pallets (a semi-truck load is 22-24 pallets), a new warehouse, and a new line for a mysterious future product.

“We’re working on a new, patented product, but I can’t talk about it yet,” Harlan says. With all this growth, Hugh and Doug are a long way from the days when they hand-package inventory in the emptied storefront. Do they miss those days? “Oh no, definitely not,” says Harlan with a laugh.