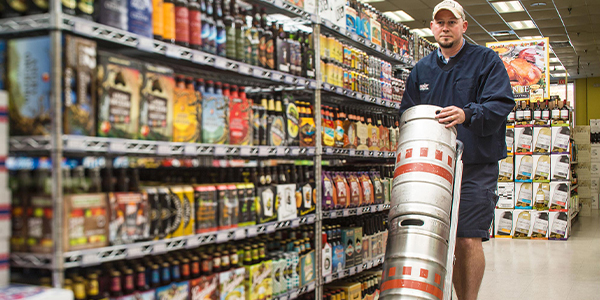 Beer is no doubt one of life’s simple pleasures. Today, beer is enjoyed responsibly and in moderation by more than 90 million adults of legal drinking age across the U.S. One factor consumers may not be aware of is the enormous impact the beer industry has on the federal, state and local economy.

The study, conducted by John Dunham and Associates, reveals that the beer industry generates millions of jobs and more than $144 billion in U.S. economic activity. Moreover, findings show that the positive contributions of the U.S. beer industry extend to more than extra economic output for the country, but also to state and federal tax revenue, estimated at $27.6 billion, generated by the industry and its consumers.

Beer’s economic ripple effect does not stop at the brewers, wholesaler and retailers. The industry also benefits companies that provide products and services essential for the production, distribution and sale of malt beverages, such as packaging manufacturers, shipping companies, agriculture and other businesses whose livelihood depends on the beer industry.

Not your ancient beer
In ancient times, beer was flavored with herbs such as coriander, rosemary and lupine. Eventually, Northern Europeans learned to use hops instead. Hops added flavor to beer, made it clearer, and helped to preserve the product.

Today, the basic ingredients of beer are barley grain for malt, the hop vine flower to give beer its mellow bitterness, water and yeast for fermentation. Certain varieties of beer also use rice, corn, wheat, sorghum and other grains. Brewers purchase more than $850 million in raw materials from farmers across the country, including the following:
• 4.8 billion pounds of barley malt grown or processed in California, Colorado, the Dakotas, Idaho, Illinois, Minnesota, Montana, Oregon, Washington, Wisconsin and Wyoming;
• 1.8 billion pounds of rice, corn and other grains from Arkansas, California, Illinois, Iowa, Louisiana, Mississippi, Missouri, Nebraska and Texas;
• 15 million pounds of hops from Idaho, Oregon and Washington.The industry also purchases equipment and machinery for breweries, packaging for beverages, shipping services, and marketing and advertising services. Each year the beer industry spends billions of dollars for these essential products and services.

These businesses in turn purchase products and services from other businesses, continuing the spread of economic benefits. And employees in all companies spend their earnings on personal purchases. Economic activity started by the malt beverage industry generates output and jobs in hundreds of other industries, often in states far removed from the original economic activity.

Consumer interest in beers, ales, imports, specialty beers and other malt beverages continues to grow. There are more than 3,500 malt beverage brands available in the U.S. alone, which is more than three times the number of products available over a decade ago. Because of the growing popularity of microbreweries and brewpubs, there are five times more breweries than a decade ago. In 2002, the industry recorded its seventh straight year of growth, hitting an all-time record in shipments from brewers to wholesalers.

As employers, the average beer wholesaling operation employs 48 workers, has annual sales of $14.1 million and generates an annual payroll of over $1.6 million. The vast majority of beer wholesalers are independent companies that operate out of a single business location and maintain a fleet of a dozen or more trucks.

Collectively, beer wholesalers throughout the U.S. employ more than 96,500 workers, provide more than $4.7 billion in annual wages and contribute more than $11 billion to the U.S. economy.

Aside from the usual real estate, income and sales taxes that businesses pay, the beer industry also pays an excise tax to the federal government, to state governments and to some local governments. The federal excise tax on beer was first imposed during the Civil War as a temporary measure to support the Union army. Brewers paid a tax for each barrel of beer sold.

In 1990, as part of the effort to balance the budget, taxes on beer and luxury items were doubled from $9 to $18 a barrel. Today, the industry pays $3.6 billion in federal excise taxes and $1.9 billion in state excise taxes annually. Unfortunately, these expenses are ultimately passed on to consumers.

Currently, 44 percent of the cost of a single bottle of beer and approximately 80 percent of the cost of a six-pack are consumed by taxes. The 1990 beer excise tax increase was devastating for the industry. Sales declined by 4.3 million barrels – the largest sales decline in the past 30 years – and 31,000 Americans lost their jobs. All “luxury” taxes included in the 1990 legislation, except the regressive beer tax, have since been repealed.

It would be remiss not to mention the beer industry’s role as a positive force within communities to promote responsible consumption of its products by those of legal drinking age.

America’s beer industry sponsors thousands of education and public awareness programs that help stop drunk driving and fight illegal underage purchase and consumption. These efforts, along with those of parents, teachers, teens and community leaders, have contributed to the steady decline in illegal underage drinking over the past two decades. The success of these activities is reflected in several national studies that show significant reductions in underage drinking.

Like all successful businesses, beer wholesalers, brewers and retailers are responsible businessmen and women and employers to thousands of U.S. citizens across the nation. Together, all three segments of the U.S. beer industry continue to provide American consumers with the best possible product to be enjoyed by more than 90 million adults across the nation: beer.

Beer in Motion – the beer industry generates millions of jobs and more than $144 billion in economic activity.