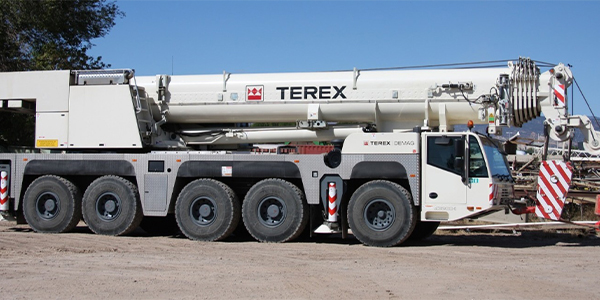 eventually, as buildings got taller and their construction ever more complicated, humans found they needed to build a machine far taller than their own reach, hence, the development of cranes.

Today, Terex Cranes, with facilities worldwide, has made it its business to help people reach lofty heights with a wide array of crane products. Rough terrain, truck and boom truck cranes are manufactured at the company’s Waverly, Iowa facility, a site involved in the construction of cranes and other heavy equipment since the mid 1940s.

How Terex entered the picture at Waverly is part of a chronology of mergers and acquisitions that have occurred over the last few decades, explains Tom Limbach, Director of Sales. The Waverly facility initially housed Schield Bantam, which was owned by Koehring. Koehring moved its Lorain hydraulic cranes to Waverly in the 1970s and corporate construction machinery division to Waverly in the mid 1980s. The Waverly facility had initially produced telescopic mobile hydraulic cranes because of the acquisition of Lorain made in the 1960s. Notes Limbach: “We had a good hold in that business. There was not a lot of international competition.” The company was acquired by Northwest Engineering in 1987, a manufacturer of lattice boom crawler mounted cranes. Koehring was one of the first current production facilities in the company’s portfolio.

Northwest began to buy name brands including Terex to provide aftermarket parts for these durable construction machines. The Terex name was more prominent than the others and was adopted in the mid-early 1990s. Terex continued its growth into the modern machinery market when it purchased PPM Cranes in 1995 and Simon in 1997. The company next launched on a binge of acquisitions and absorbed many companies but as time went on, officials realized that the Terex brand was still the one most recognizable and stayed with it. Terex in Waverly is one of oldest facilities in the group to use the Terex name.

This facility originally produced truck mounted dragline cranes. Crawler mounted excavators and telescopic boom hydraulic cranes dominated the production mix for three decades. In the mid-early1990s, aerial work platforms replaced the excavators and the facility produced mostly telescopic boom products. “That was one of our biggest transitions,” Limbach notes. The change occurred because of overwhelming international competition on the excavator side. “We basically changed our focus from a digging house into a lifting house.”

In changing its focus, the facility also changed its fortunes. Terex’s Waverly facility is responsible for a large portion of the company’s overall business in rough terrain, truck and boom truck crane products. Waverly now experiences what the company refers to as “hefty backlogs” in the ordering department. The company is also reaching a new high in production efficiency through process controls and design acumen.

Equipment for any need
Terex’s Waverly facility builds machines for a number of applications, including rough terrain cranes ranging in capacity from 20 to 100-plus tons, with boom lengths from 94 to 126-plus feet, for the general construction and rental industries; truck cranes from 30 to 90 tons, with 94 to 138 foot lengths, for the crane-for-hire industry, and boom trucks of 10 through 35 ton capacity, with boom lengths of 47 to 100 feet, for the construction, rental and utility industries.

New T340-1, T340-1XL, T560-1, T775 and T790 models are all packed with the same features of the company’s latest rough terrain offerings, but with high-speed carriers, which utilize over the highway driveline components to maximize portability.

Boom truck products – BT2047, BT2057, BT2857, BT3063, BT3470, BT4792, BT60100 and BT70100 – all feature the “Stinger” benefits of a keel boom, color-coded lift charts, rated capacity indicator, mounting configuration variety of boom truck, rear mount, tractor mount or riding seat. The boom truck is a mobile telescoping hydraulic crane that can be mounted onto a commercial carrier; the Waverly facility generally uses Ford and Sterling chassis on which to mount the cranes. The company will also mount to dealer-supplied trucks of varying brands, according to what the customer needs. “The boom truck is our highest-volume product,” says Limbach.

In addition, Terex can send the boom truck crane out as an assembly kit. “We do pre-assembly and presetting and provide the crane in kit form to dealers and they buy their own commercial carrier,” Limbach explains. “The dealer gets the major components and hardware and uses his own labor, which saves money. And if it’s going offshore, it can containerize easily.”

Limbach notes that Terex Waverly’s production of rough terrain cranes comprises a major portion of its crane business. “They’re one of our bread and butter products,” he says. Truck cranes and boom trucks are an integrated and very important part of the company’s offerings as well.

He adds, “The dealer link in equipment sales is extremely important, since local support is key to ultimate customer satisfaction and satisfied customers repeat the experience.”

Terex was one of the first to take a hard look at synergies through product design components, ensuring that all of its cranes were designed in a similar manner under the hood, so that a servicing mechanic, familiar with one machine, wouldn’t need to retrain to service another. “This enhances the ability of the distribution network,” he says. “If you’re trained on one, you’re trained on all by having common technology.” It also reduces the parts warehouse space, investment required and down time, since many of the component parts are common.

Using the old adage “form follows function” as an engineering development philosophy, Terex has also focused on enhancing the functionality of its machines over providing aesthetic items such as chrome plating and leather seats. “We want to make sure our equipment is user friendly and as functional as possible,” says Limbach. Competitors, he adds, have since begun to transition into the synergistic approach to engineering rather than eye-catching appeal.

The TIP program has led to reinvigoration throughout the entire organization, Limbach stresses. “We want to make Terex more of a household name, to where lay people recognize and respect the Terex name brand,” he comments. To that end, “our objective is to become to most profitable, best value, and innovative crane company in the world – and provide the best support in the industry”.