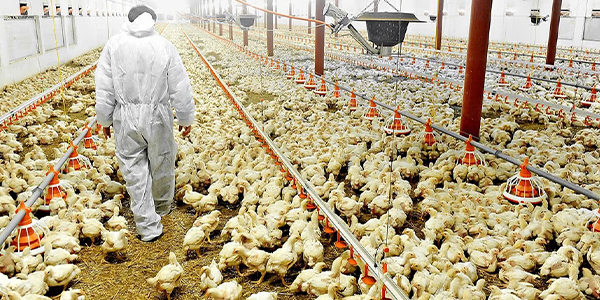 During the Depression, a famous politician’s wish for America was “a chicken in every pot.” If MBA Poultry had its way today, there would be a “Smart Chicken® in every pot.”

The Tecumseh, Neb.-based company has been producing “smart” chickens since 1998. This doesn’t mean the chickens are Ivy League-educated before going to market. It has to do with the way the chickens are raised before slaughter and how they are processed afterwards, says Erik Monson, the company’s vice president of sales and marketing.
MBA Poultry raises its chickens on a 100-percent natural diet that consists of corn, soybean meal, vitamins and microbes and completely eliminates all animal protein. In addition, its Organic Smart Chicken® is raised in a free-range environment, giving the chickens access to the outdoors.

Once the chickens are slaughtered, they are processed by a method known as air chilling, rather than through the use of the standard water-immersion method used by the remainder of the industry.

In the air-chill process the birds are sent through a chamber that is filled with purified cold air, as opposed to the standard method in which chickens are chilled by being immersed in vats of very cold, non-potable water. Air chilling locks in the natural flavors of the chicken and preserves the quality. According to USDA-funded studies conducted by the University of Nebraska, it also kills more salmonella and campylobacter, two bacteria that are responsible for about one million hospitalizations and 20 deaths per year. In addition, air chilling reduces psycrotropes, the bacteria responsible for spoilage, by about 70 percent.
MBA Smart Chickens® are raised by 24 grower/owners that hold a vested interest in the company. There are also 20 company owned barns located just north of the 90,000-square-foot manufacturing facility, also in Tecumseh.
“Whether we grow the birds or one of our contract growers does, we own the birds from the age of one day old,” Monson says. “And we are responsible for the birds’ diet from birth.”

Besides raising the chickens, the contract growers have equity in the company, giving them incentive to grow quality birds in their operations while meeting strict MBA standards.

Right now, the company’s production range stands at 240,000 birds per week. However, MBA is currently poised for growth, and by the end of 2005 hopes to expand that number by about 20 percent.

Smart growth
MBA has had very strong growth in a relatively short period of time. Haskins started the company in late 1998, naming it after his three children, Mark Jr., Bridget and Amber. MBA closed briefly in 2000 for reorganization, opening again in August 2000.
The company started delivering locally to supermarkets upon its inception, and has grown considerably. It now distributes in 37 states coast to coast, to some 3,000 supermarkets.

One of MBA’s biggest milestones came last September, when it introduced the first Organic Smart Chicken®. These birds, says Monson, meet a wide range of USDA requirements, mostly having to do with the fact that the chickens are segregated, fed organic grains, and humanely treated. In addition, Organic Smart Chickens® take no antibiotics.

“If a bird is in need of an antibiotic, we will treat it, but it won’t be used in our line,” Monson says. The company is currently working on implementing a Controlled Atmosphere Stunning (CAS) system, which has to do with the way the birds are prepared for slaughter.

“Currently, like the rest of the industry, we use electricity to stun the chickens and get them ready for slaughter,” Monson explains. “With the CAS system, which we will have in place by the end of this year, the birds will be put to sleep using a gas system. This is a more humane way to slaughter the birds. It also prevents damage to the bird, thereby preventing damage to the final product.”

“We currently use a biannual certification program, where a third party audits our facility to be sure we are in compliance with standards set by the Food Marketing Institute and the American Meat Institute,” Monson says. “Animal welfare is very important to consumers right now, and there is a great deal of publicity surrounding how animals are treated.” All of the extra preparation adds to the final cost of the chicken that a consumer will buy in the supermarket, raising the price by about 75 cents to $1 per pound. However, Monson says, consumers are willing to pay a premium for extended attributes that add value.

“Consumers are very concerned with their own health, and the health of the animals they are eating,” Monson says. “They want to know that the chicken they are eating is raised in as healthy a manner as possible.” Besides that, consumers are very concerned about what Monson terms “the eating experience.” “People are on the go, but are also paying more attention to what they put into their bodies. They are becoming much more educated,” Monson says. “However, they still buy food based on flavor and texture – the eating experience. This is where Smart Chicken exceeds expectations. It has the unique combination of health and flavor profile that no other chicken, and not many other foods in general, offer the consumer.”

The added flavor, Monson adds, is because the natural juices are locked in the product and not washed away with non-potable water.

MBA makes sure to point out this measurable difference to the consumer as often as possible, through its Web site, point-of-sale materials and through working with its retailers. The company’s Web site includes an online store where consumers can purchase Smart Chicken® to be delivered to them, a “Smart Kitchen” link that offers recipes, and a link to grocers, divided by ZIP code, that offer Smart Chicken® products. It also offers the results of several studies that prove the high standards to which Smart Chicken® adheres.

“We educate consumers like crazy,” Monson explains. “We are dedicated to education so that people can make informed decisions and truly understand that our product is superior.”

“In fact,” Monson concludes, “innovation and education are our two strongest points. We’re the first to do a lot of things, and we’re good at communicating that to the public. MBA does everything it possibly can to give the American consumer a return on their dietary investment.”