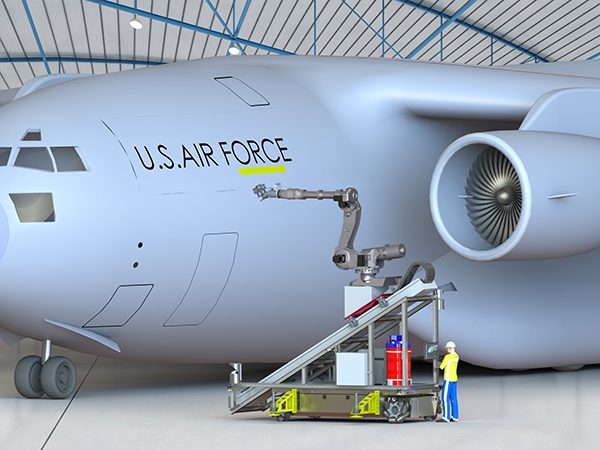 That’s nowhere near the image that the robotics community has in mind for future industrial robots. The vision can best be described as mobile, agile, and adaptive. It’s not rooted to a floor; on the contrary, it can navigate through its workspace. It uses machine vision and GPS-like location to orient itself to the object to be worked on. It understands its tools and their capabilities and is able to apply them automatically to new tasks. And when it’s done it can be sent to do a different job, with different tools.

Robotics researchers also want their new machine to “speak” the same robot language as a host of other robots worldwide. Rather than being a trade secret, the language would be opensource and accessible to programmers of a broad range of robots.

All of this isn’t just a wish list: It’s already in development at Southwest Research Institute in San Antonio, Texas, where researchers in the Intelligent Systems Division have spent nearly three decades developing software to make industrial robots smarter. SwRI also has been instrumental in developing and spreading Robot Operating System–Industrial (ROS-I), an opensource framework that is designed to build an international community around the use of ROS for industrial applications.

Manufacturers and suppliers have adopted ROS-I for applications that range from robots that dynamically sort cluttered objects to ones that can paint arbitrary parts put in front of them to robots that are able to move autonomously inside a warehouse or factory while avoiding obstacles.

The prospect of developing intelligent, multitasking robots has caught the interest of the U.S. Air Force, which recently assembled the team of SwRI, The Boeing Company and the National Center for Defense Manufacturing and Machining (NCDMM) to make advanced robotics reusable for aerospace maintenance and manufacturing. NCDMM is managing the four-year, $6.7 million contract under which Boeing is providing process development and tooling expertise. SwRI is developing software using the ROS-I platform and will integrate all the subsystems on a large mobile robotic platform.

The Air Force Research Laboratory (AFRL) challenged the team to develop and demonstrate a mobile multi-process robotic solution through the Advanced Automation for Agile Aerospace Applications (A5) program.

One of SwRI’s main objectives is to make it easier to use one piece of machinery to transition from one manufacturing or maintenance task to another, quickly and cost-efficiently, without needing an engineering or programming rework between tasks.

The A5 program aims to upend that paradigm using ROS-Industrial to develop flexible technology that can be used across different manufacturing processes and environments. Phase I will develop adaptive robotic capabilities in aircraft sanding. Phase II will apply those capabilities to composite aircraft repair, and Phase III will develop nondestructive capabilities using the same mobile platform.

Using ROS-Industrial, the team can dramatically reduce the amount of manual programming and intervention needed to implement advanced automation.

A history of smarter robots

At SwRI, the drive toward smarter industrial robots for military aerospace tasks began more than 25 years ago with an automated process to polish away scratches in the clear-composite cockpit canopies of F-16 fighter aircraft. Later, SwRI was active in developing robots to remove coatings from F-15 fighters. For that airplane and other modern aircraft and aerospace components, it’s important that the robot remove paint without damaging the underlying composite materials that make up large portions of modern aircraft. Such a system can save time and money while providing consistent quality, but perhaps most significantly, it can improve worker welfare by removing them from hazardous environments.

As aircraft decorative coatings have become increasingly complex, the aircraft manufacturing and maintenance communities are seeking more efficient ways to apply complex graphics. There is interest in using inkjet technologies applied to aircraft painting. But to fully leverage the potential efficiency and aesthetic advantages of the process, the technology must be able to print on a variety of complex geometries and in varied orientations, over large areas.

Inkjet printing provides superior performance compared to decals or appliqués, which are difficult to qualify due to adhesion and robustness issues over the wide range of speeds and environmental conditions in which aircraft operate.

The inkjet system, an internally funded outgrowth of SwRI’s earlier work with LCR, required solutions to obstacles associated with the large, complex surfaces to be painted, as well as the need to adjust for inaccuracies in robot positioning and vibration of robot structures.

U.S. Patent No. 9,527,275, “High Accuracy Inkjet Printing,” covers hardware and software for precise application of multiple graphic swaths of color ink onto complex surfaces, creating a continuous graphic image. Each pass of color, or graphic swath, can be aligned over curved surfaces without spaces, gaps, or discontinuities.

A vision sensor detects an encoded pattern to ensure accurate application of graphic images. The encoded pattern is deposited on the surface in a known location with respect to the most recently deposited graphic swath. The printing system includes high-bandwidth servo actuators to locate the print head with respect to the encoder pattern to permit precise positioning for the next swath.

Taking ROS-I to the world

Using ROS-Industrial as a primary framework for robotics design and development, researchers such as those involved in the A5 team can quickly integrate the advanced capabilities of ROS with industrial hardware to enable robotic programs that perceive the workpiece, automatically plan tasks and associated robot motion, and reliably execute those plans.

SwRI maintains the ROS-Industrial software repository and manages the ROS-Industrial Consortium (RIC), which has more than 40 members in academia and industry-member groups around the world. Launched in 2013, RIC has three branches, with SwRI leading RIC-Americas and Fraunhofer IPA in Stuttgart, Germany, leading RIC-Europe. In 2016, RIC expanded into the Asia-Pacific region with the Singapore-based Advanced Remanufacturing and Technology Centre and Nanyang Technological University launching RIC-APAC. RIC supports the ROS-Industrial community with training, technical support, and setting the roadmap for ROS-I.

Initiatives such as the A5 program draw upon the resources and ingenuity of the ROS community, a diverse group of experts in academia and industry that are advancing secure and opensource robotics.