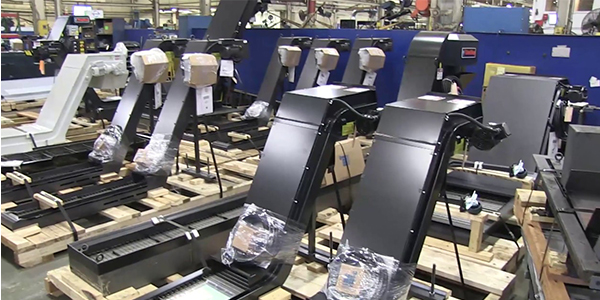 Mayfran International, which has been a supplier for the metalworking industry since its founding in 1933, is committed to the philosophy that “performance and customer satisfaction are everything.”

Mayfran’s design and project management capabilities cover the globe. Its manufacturing, sales and engineering facilities are located in the United States, Japan, The Netherlands, India and Korea. The company has also established sales and service offices in Canada, Great Britain and France. Indeed, Mayfran’s name is universal, known worldwide for handling reusable scrap that is headed for any number of recycling operations.

“Our equipment collects and processes the turnings, stampings and chips that are picked up by many processors. It would be hard for them to find a facility in America that didn’t have a Mayfran system collecting the material they are going to be processing,” says Dick Merrill, vice president of marketing/sales.

In the Chips
Mayfran’s Cleveland facility features 110,000 square feet of manufacturing space and 35,000 square feet of office space. The company’s design capabilities include one of the largest and most sophisticated computer-aided design (CAD) networks in the industry. “Nobody else in the world has all this under one roof. We design, we manufacture and we sell the product,” says Andy Tiltins, senior vice president. The company employs slightly more than 300 workers in the United States.

The major manufacturing markets using Mayfran’s standard and custom-designed products are the automotive, machine tool and off-road transportation industries. The most significant recycling markets are the pulp and paper industries, municipal and private waste-handling facilities, and waste-to-energy utilities.

Scrap processors, which purchase Mayfran machinery for both their businesses and their suppliers, also represent a significant market. A case in point is a system to transport scrap directly from the stamping machine into the containers, using a unique conveyor that moves from side to side for even loading. The conveyor also is capable of judging if a container is full.

Mayfran’s most basic conveyor product is the Chip-Tote conveyor, a hinged steel-belt product designed to simply remove turnings from machine tools. The durable Chip-Tote dates from Mayfran founders George A. Mayfrath and A.J. Franz, who developed it in the 1930s along with other patented apparatus. The partners operated the May-Fran Engineering Company until its acquisition by Fisher Industries in the 1960s.

Later renamed Mayfran International, the company saw its operations accelerate after it passed to its current parent company, Tomkins PLC, a multibillion-dollar British holding company. The association with Tomkins opened the door to new opportunities in the international arena, allowing Mayfran to import ideas and products from overseas manufacturers.

Importing, says Merrill, sidesteps the bother of duplicating a foreign product at home. “Tomkins provides the financial backing so long as we stay profitable, but otherwise gives the company a lot of independence,” adds Rich Westfall, director of marketing services.

Japan has proved to be a rich source of supply for Mayfran via a joint venture with Bunri Industries Ltd. in Tokyo. Bunri’s magnetic roller separator, magnetic spiked-belt separator and magnetic screw conveyor have made an enormous contribution to Mayfran’s domestic operation, Merrill maintains.

Another big marketing innovation for Mayfran was the introduction of ConSep 2000® in the mid-1990s. A dual conveyor system with a filter drum, the ConSep separator cleans coolant to 50 microns. Add the Mayfran AT coolant cleaner, and the cleanliness is extended to 10 to 15 microns nominal.

Process Partners
Marketing partnerships with German manufacturers have contributed to Mayfran’s chip-processing offerings. The AmorLift™ has a unique design featuring an in-feed chute that funnels chips into a hopper with a live bottom that raises and lowers, forcing the chips into a wedge wire screen that filters and collects machine oil and coolant through a discharge chute.

The environmentally efficient Viavent system, which pumps chips through a network of overhead pipes, is another German import. DaimlerChrysler has purchased the system, which eliminates cumbersome in-the-floor coolant trenches, for installation at its transmission production plant in Kokomo, Ind.

Mayfran’s newest German marketing partnership is with RUF GmbH & Co. KG. Mayfran will primarily market RUF’s briquetting systems to the metalworking market in the United States. This equipment reduces metal chips into dense blocks, which are drained of contaminating oil and coolant. These blocks are then ready for reprocessing at scrap mills. Cost-efficient, technologically sound, operationally safe and environmentally responsible, Mayfran systems are poised to meet the ever-changing needs of a global marketplace, company officers say.