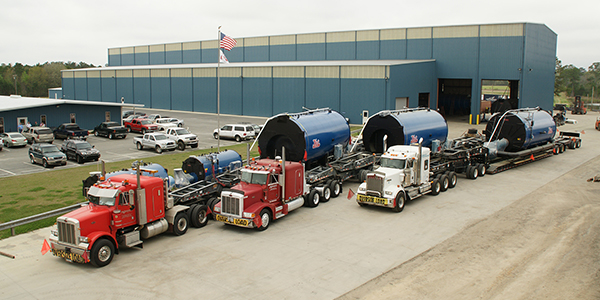 In between describing the company’s line of industrial package boilers and solid fuel boilers, Hurst Boiler’s Gene Zebley pauses to reflect on the company’s growth: “There came a point several years ago,” he explains, “when Gene Hurst had to decide whether to keep this a small family business or grow it and he decided to see how far it could grow.”

Since making that decision, growth at Hurst Boiler & Welding, Inc., has been measured in global reach, in unit production and in square footage. For example: Mr. Hurst’s original shop in Coolidge, Ga. (pop: 200) is still in use but amounts to but 150th of the square footage the company now uses. In 1999 Hurst built its 6,000th pressure vessel; in 2002 it had produced its 10,000th pressure vessel. Hurst’s new production facility in nearby Moultrie, Ga., just produced its 1,000th pressure vessel in its first complete year of operation. The company operates in an area of southwest Georgia where a high percentage of all U.S. packaged boilers are currently made, and five years ago it put Coolidge on the map in Shanghai, China, when it opened a facility to supply Asia.

Now well into its corporate transformation, Hurst, still family owned and run, has been possessed with a bit of an Annie Oakley mentality, looking at its nearby competitors and proclaiming, “I can do anything better than you.” The company’s official motto is: “Wherever there’s industry – if steam is required – you’ll find Hurst.”

Solidly fueled
Gene Hurst founded his company in 1967; he had been a boiler service technician and started his own boiler service business. Now for 36 years, Hurst Boiler & Welding Co., Inc. has been a major supplier of gas, oil and wood-fired boilers to thousands of customers worldwide. Hurst also manufactures a complete line of boiler room peripherals such as blowdown separators’ surge tanks, pressurized feed water tanks, steam accumulators and stacks.

As far as product lines, there are three: A vertical tubeless boiler with a small footprint is used for dry cleaning, food processing and heating applications. Industrial package boilers with a front burner mount go to giants such as Nestle or Georgia Pacific. The third line of solid fuel boilers is specifically designed to utilize a wide range of standard and alternative fuels, such as bark, sawdust, hog fuel, coal, construction debris, sander dust, paper and shavings. This line is garnering attention in recent months as companies increasingly institute renewable energy programs in line with new federal environmental directives.

“We originally built solid fuel boiler systems solely for the Southeastern lumber industry,” says Zebley, “but we gradually expanded to saw mills all over the United States. We started an export marketing program six years ago globally and now have over 800 of these systems installed all over the world,” in countries such as Israel, Singapore, Argentina, Mexico and Canada. “We’re one of the last companies that builds this type of equipment in this size,” he adds, in a range of 100 bhp up to 1,800 bhp.

“Our entire national infrastructure is built on moving petroleum energy,” he adds, “but it was never designed for solid fuel, which takes a different infrastructure.” Primarily, he explains, the market had centered on companies that generate the waste on-site, leaving out the smaller producers with smaller amounts of waste. However, Zebley adds, the federal government’s renewable energy initiatives coupled with tax incentives may take the cost burden out of having such a renewable energy system for the small players.

Hurst’s high pressure Hybrid Series solid fuel system and under feed “Frederick” stoker became the industry standard for high moisture content fuels in its available size range as soon as it came on the market. From the jungles of South America and Asia to the woodworking capitals of the U.S., it has become the most proven of all solid fuel boiler designs. From cocoa shells and nut hulls to every imaginable form of wood waste, to paper and various forms of solid waste, this boiler has created energy using them all.

The Hybrid Series can also be configured for dry fuel applications. All the systems integrate a multi-zone grate area with independent damper controls to ensure proper zone air mixture for an even conversion into gas. To ensure the cleanest emissions from the exhaust stack, a fully automated oxygen monitoring system continually adjusts the over-fire-air system to efficiently combust the gases and enable peak performance.

The solid fuel low pressure Firebox model is also designed for wood waste, agricultural by-products, and non-flowing industrial waste fuel. This model with its feed hopper for free-flowing fuels and its optional gas/oil burner offers flexibility that may take several boilers to rival. Generous grate size and heating surface make this the premier coal fired boiler system offered today for a very wide variety of coals with the flexibility to burn any liquid or gaseous fuel.

New applications for the solid fuel boilers are being used by dairy farms and effluent producers as well as chicken houses (the company has just finished research for some large producers). Hurst is working with some of the largest animal farms in the country to implement renewable energy and bedding treatment systems which eliminate off-site waste disposal and runoff.

Hurst’s Solid Fuel System’s newest optional feature is an automatic de-ashing stoker system which eliminates the job of manual ash removal when using high ash content fuels like coal or animal waste. And Hurst’s equipment is very economical to install, Zebley explains, because it is built in a modular fashion, and the main components can be set up on a slab in five days or less. These modular designs also simplify export shipping.

There’s even another benefit, Zebley says: the generation of electricity. “It’s possible to make electricity and use this “in house” to decrease the potential for paying demand charges,” Zebley says. The ideal situation would be to utilize the waste stream, such as cardboard or bark and sawdust, to produce steam and electricity (several companies he cited realized a 100-percent ROI by converting their waste streams this way).

Wetback: different from the rest
One of Hurst’s keys to success, says Zebley, and a component of its ability to win in a highly competitive market, is its penchant for unique design. Take its wetback turn-around package boiler design. Traditionally, companies had manufactured a heavy, bulky refractory door to reflect heat back to the boiler. Hurst’s turnaround is part of the boiler vessel and is surrounded with water, making it easier to maintain which, in the long term, cuts down on costs.

The wetback has myriad standard features; among these is construction in accordance with ASME Code, and a design proven to give much longer useful life cycles than dry back boilers. All of Hurst’s boilers are tested, inspected, and registered with the National Board of Boiler and Pressure Vessel Inspectors.

In addition, the wet back has independent tube sheets with uniform temperatures. Unlike three and four pass dry-back boilers that have tube sheets with larger temperature variations, resulting in premature tube failure and cracks in the tube sheets. Because there is no large refractory rear door, one man can easily remove the rear cover plates for access to the tubes. Front doors can be opened without removing burner components or controls. With computer aided design, Hurst has made the wet back a space saving workhorse without sacrificing the principle of five square feet of heating surface per BHP.

Good to the environment
Hurst developed its first low emission boiler in 1992, and has been incorporating new technologies to improve upon this ever since. Designed and engineered with larger furnaces enabling the company to provide for inherently lower NOx emissions, Hurst also has historically been at the forefront of utilizing burners specifically designed for low emission projects.

In addition, Hurst’s state-of-the-art combustion technologies are engineered to meet the stringent requirements for California, including SCAQMD, utilizing natural gas for fuel. Environmentally friendly, these boilers are fully factory-assembled, piped, wired and tested.

Competing on its own terms
Hurst’s size means quicker response to requests, personal one-to-one relationships, and the kind of communication that keeps customers aware of options and project status. Zebley says the company also is very efficient with its labor. Initially, family, friends and local farmers with expertise in welding helped rebuild boilers. Now the company employs over 450 workers all around the world.

Most of these workers are employed in the main facility in Coolidge where they perform ASME certified fabrication and machining as well as produce components such as stokers, conveyors and pollution control equipment. Small vertical boiler and industrial boiler lines are manufactured in a Moultrie, Ga., facility. The plant in Shanghai is solely involved in manufacturing systems in Asia (competing in China with no fewer than 1,000 boiler manufacturers, Zebley says).

Hurst has 40 distributors in the U.S. for its industrial boilers; 50 for its vertical line and four for its solid fuel systems. Improving its export distribution structure, now comprising 47 distributors, is an area receiving constant attention, Zebley adds. The company has been able to retain its distribution and customer base, he says, by “increasing efficiencies rather than increasing price. We’ve had very few price increases in the last 15 years.”

Eventually, there may be another production facility added in the U.S., Zebley says, as Hurst expands its reach even further. “We’ve been expanding our export market; we move into new countries every week,” he says. “We’re constantly adding new equipment to increase production and we keep a constant ‘for hire’ sign outside looking for new team members.”

The upshot of all this activity is that Hurst is now a name that has become well known in its industry. As Zebley attests, “We have developed a strong representation for all three product lines and we’ve increased our market share every year since we began fabrication.”