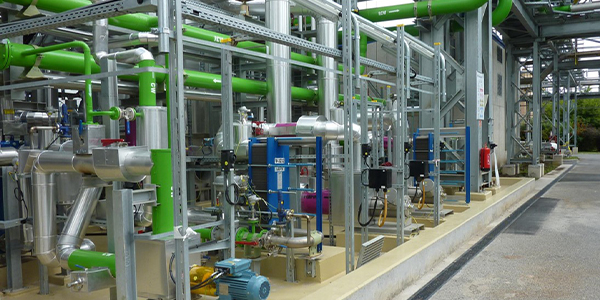 For the last five years, a building boom, especially in the residential market, has exploded in North America. And you could say that the glue holding things together are the products made by Dynea Inc., the domestic branch of a Finnish global leader in adhesive resins for wood products.

Much of the plywood or orientated strand board (OSB) that you see going into the roofs or the floors of all of those new homes involves resins or chemicals produced by Dynea that are used to bond the wood board together. Other Dynea-made resins and adhesives are used in everything from wood beams to furniture to paper products. “This year has been extremely robust in North America,” said Robin Augustine, the vice president of the Southeast region for Dynea USA. “Our sales volume is up 10 percent.” Augustine said he expects that rate of growth to continue, as Dynea aggressively looks for new ways to market the resins and adhesives that it produces at its 10 manufacturing plants here in North America.

Scandinavian roots
“This is not a new, emerging market, but there are emerging products,” he said. “We spend a lot of time on relationships and on understanding the customers and the end-makers in the value chain. We keep customers in our business by coming up with bonding solutions so the customer’s products can work in their intended markets.” Dynea is not a well-known name in North America, but its roots go back a ways. The first branch started in Norway in 1949, when Dyno Kjemi Norge was established. Another key company was Neste, which entered the chemicals and petrochemicals business in 1971.

A couple of North American-based companies were also critical in the ultimate creation of Dynea. Neste purchased one U.S.-based company, Chembond, in 1988. Neste acquired Reichold’s resins business in Canada four years later. In 1999 and in 2000, a Helsinki-based investment group called Industri Kapital purchased and merged Neste and Dyno into one company called Dynea.

In 2003, Dynea produced global revenues well in excess of $1 billion. The company boasts 55 production units in 26 countries – including Asia as well as Europe and North America and employs some 3,200 people. Roughly 575 of those workers are in the United States or Canada. The company has two major research centers in North America. One is located in the Oregon community of Springfield, while another is based in a suburb of Toronto. Dynea’s 10 production facilities in North America are scattered across the United States and Canada, but tend to be in the major wood producing regions of the Southeast or Pacific Northwest.

“In general, they’re located where the wood baskets are located,” Augustine said. “We’re located in places like Raleigh (North Carolina) where the large furniture and wood producing companies are based.” Augustine noted that the company has about 200 research and development specialists around the globe, many of whom work closely with customers to develop products that are critical to bonding wood and other materials – products that the ultimate consumer usually isn’t aware of. “What we produce is located inside the actual structural part of the wood floor product,” he said.

Four business units
The company is divided into four distinct business groups. Probably the most prominent in North America is the panel board resins group. The unit’s products are used to bond wood chips, fibers, strands or veneers to produce particle board, medium density fiberboard (MDF), oriented strand board (OSB), laminated veneer lumber (LVL) and plywood. “Our resins are used in plywood and other panel board – you can buy it at Home Depot but a lot of it goes directly to construction companies,” Augustine said. “Panel board is our biggest business and our primary focus in North America.”

In promoting that side of the business, Dynea has paid especially close attention to growing concern over formaldehyde emissions, especially with so much plywood or OSB used in new homes. The company has been promoting its low-emission resins that include extremely low formaldehyde emissions, moisture resistance, fast cure, and tolerance to different wood species as well as variations in fiber quality. “That’s becoming an industry hot button,” Augustine said. “There’s a lot of interest in reducing formaldehyde or in producing resins that don’t have formaldehyde, and Dynea is working diligently in that direction.”

Another major unit for Dynea is wood and specialty products. The firm’s wood adhesives are used to manufacture gluelam, I-beams, solid wood panels, stock panels, parquet, doors, windows, cabinets, furniture and kitchen table tops. Specialty adhesives play a major role in bookbinding, labeling, shoes as well as paper and packaging applications. “These tend to be lumber products like engineered beams that go into the structure of the building,” Augustine said. “So these would be structural products like beams or joists, or for furniture manufacturers who glue together wooden products.”

A third business division is the industrial resins unit. Its products are used in construction applications like insulation wool, glass fiber tissue and roofing mat, laminates, and in paper impregnation, such as decorative paper impregnation. This section of Dynea offers a wide variety of phenolic, melamine and urea resins as well as additives. Dynea’s overlays division offers a wide range of innovative specialty products for such diverse applications as concrete shuttering boards used in heavy construction, and also the latest designs in laminate flooring for new homes. “A lot of these are kitchen cabinets that are prefabricated and the wooden structure is decorated with paper that is adhered to the panel board,” Augustine explained.

Like most industries, Dynea’s global arm has been reaching into the Chinese market.The firm has built a phenolic impregnation line in Southern China. The production line is located at the site of Dynea Guangdon, where Dynea’s new adhesive resins plant recently began commercial production. But Augustine noted that because of the nature of the construction market and transportation issues, its products for North America will still be made here.

He said that Dynea has been able to do well in North America since its creation – in good measure because the drop in interest rates has benefited so many different arms of the company, from home construction to kitchen upgrades and new furniture purchases financed by home equity loans. “All of these markets have been rather busy in the last few years,” Augustine said. The sound of hammers across America is the sound of profit for Dynea.