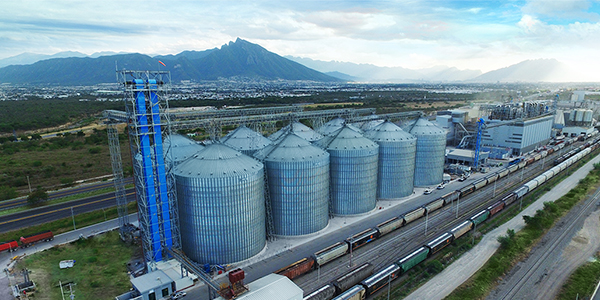 In time, the company started importing and processing other types of seeds such as cotton, safflower, soybean and canola. In 1983, the company acquired Aceites Vegetales Finos (AVEFINSA), an edible oil refinery and bottling company located in El Salto, Jalisco, in order to satisfy demands in the industrial oil segment and the consumer oil market. In 1984, the group founded its division Proteínas Naturales S.A. de C.V. (PROTENA), establishing a natural protein processing plant in Guadalupe, Nuevo León. Five years later it launched its third division, Proteínas Básicas S.A. de C.V. (PROBASA) a soybean mill and processing plant in Matamoros, Tamaulipas. Finally in 2002, the PROTENA plant production capacity was expanded in order to be able to refine edible oil, absorbing the production formerly carried out by the AVEFINSA facilities.

In 1997, the company launched its soybean oil Nutrioli, a product that soon became the preferred cooking oil of consumers in the northern region of Mexico. Between 1997 and 1998, Ragasa, PROTENA and PROBASA obtained ISO: 9002 certification from ABS Group Inc. AII of Ragasa’s packaged products are kosher-certified by the Orthodox Union of the United States.

Grupo Ragasa www.ragasa.com.mx has attracted widespread recognition for its products and work ethics. In 2001, PROTENA obtained an award for quality from the Mexican National Association of Edible Oil and Butter Industrialists (ANIAME); that same year, PROBASA received an award from the same group given to the best soybean seed analyst. In 2003 and 2004, the American Oil Chemical Society (AOCS), awarded the group with first place in the SMALLEY program for soybean paste analysis. In 2004, Grupo Ragasa obtained an award given out annually by the State of Nuevo Leon for security and hygiene in the workplace. In 2004 and 2005, Organización Soriana awarded Grupo Ragasa the “Don Francisco Martín Borque” recognition for being the best supplier in the supermarket division. The number one priority for the company is providing top quality products that fulfill consumer needs. As a result of this approach, Nutrioli www.nutrioli.com is the only soybean oil endorsed by the National Association of Cardiologists of Mexico for its healthy properties and by the Culinary Association in Mexico for its superior performance in cooking.

What are the reasons for Grupo Ragasa’s continuous success? “Throughout its commercial history, our group has had an ongoing program of innovation. For example, we were pioneers in selling edible oil in PET bottles. In the last 10 years, the group has experienced important growth, becoming the leader in the production of soybean paste and its brand Nutrioli is now third in the edible oil supermarket channel in Mexico,” said Armando Olvera Fonseca, commercial director.

FACILITIES THAT WORK
In 2002, the group invested heavily to expand the PROTENA plant, making it into a world-class facility. The new plant is dedicated to refining, bleaching and deodorizing vegetable oils.

The group purchased state-of-the-art technology of Belgian, Canadian, French and Italian origin with equipment from DESMET, HUSKY and SIDEL. The three plants that comprise PROTENA employ 750 workers and have a daily milling capacity of 3,000 tons and refining capacity of 500 tons per day.

The mill processes soybean, canola, cotton and safflower seeds. After reception of the raw material, a physical and chemical evaluation of the seed is carried out in order to be able to anticipate any modification that might be needed during the process to ensure an even quality in the final product. The seed is then stored under specially devised conditions to guarantee quality parameters.

Grupo Ragasa offers a variety of products both for human consumption and for livestock and poultry feeds. Milling capabilities allow the production of the soybean meal Hi-Pro with a minimum protein content of 48 percent; soybean meal with a high and low protein content of 47 and 44 percent respectively; whole meal Fatsoy@; cotton meal in different fatty concentrations; canola and safflower meal; and soybean and cotton hulls.

The seeds undergo several processes including pre-cleaning,drying and tempering. This last process is unique to the production of Hi-Pro soybean meal and involves the controlled and gradual heating of the seed followed by its cooling and repose for 72 hours, and finally, its preparation. Once the oil is extracted from the collets, the solvent is carefully distilled and separated to guarantee the final quality of the oil. Solids are dried and thermally processed to reach certain flour specifications in terms of digestibility index, urea activity and percentage of humidity. They are then milled to achieve end product consistency, while phospholipids are extracted from the oils, a process that produces lecithin for industrial use.

“In Ragasa, vegetable oil refining processes are carried out with special attention to the conditions prevalent in storage, handling and transportation. Our installed capacity allows us to perform the RBD – refining, bleaching and deodorizing – process with a high standard of excellence,” said Olvera.

In 1989, the company acquired PET equipment in order to be able to manufacture its own bottles. “We were pioneers in the industry, innovating the standard presentation for edible oils by changing the packaging from the amorphous circular bottles that were traditional in the industry to a new rectangular bottle that is easier to store and more resistant,” he continued.

PRODUCTS THAT MATTER
According to Olvera, the Mexican edible oil market is dominated by a few national and international companies such as La Corona from the state of México; Aceites, Grasas y Derivados from Jalisco; Industrias Patrona from Veracruz; ACH Foods, Proteínas y Oléicos from Mérida with its brand Capullo and Ragasa’s own Nutrioli soybean oil.

Ragasa launched Nutrioli in the premium oil segment to compete in quality and price with other premium oils such as the canola oil Capullo. “The great achievement of our company was to place our product at the top with the highest quality products in the market, comparable in price and preference,” said Olvera.

This achievement was possible given the advanced technology employed in the refining process that allows purification in Nutrioli, for example, using only 0 to 10 parts per billion of chlorophyll while industry standard oils need 50 to 70 parts per billion. According to the specifications of the Food and Drug Administration (FDA) Nutrioli has 0 grams trans fat per serving thanks to the deodorization technology used. And finally, Nutrioli has excellent physical features like its color and clarity, and it is tasteless.

Under the campaign “to feed is to give love,” the company targets the young homemaker and mother who is concerned about healthy products for her family. In addition, the company has produced a revalorization of soybean oil, which offers higher margins to distributors and wholesalers.

Ragasa also offers an edible vegetable oil Ave with a special mix formulation and versatile line for restaurants, food service and bakeries and bread producers as well as the final consumer, and Oli, a vegetable oil that is a mix of soybean and cotton with excellent characteristics for certain uses such as frying, preserves, and dressings.

The company has two main distribution channels: to the final consumer through the main departmental stores and supermarkets in Mexico such as Casa Ley, Chedraui, Comercial Mexicana, Gigante, HEB, Soriana and Wal-Mart de México and through wholesalers like Almacenes Ibarra, Casa Chapa and Organización Sahuayo, among others.

STRATEGIES THAT SUCCEED
“To continue with the explosive expansion that our brand name Nutrioli has experienced in the northern region of the country, we launched a national advertising campaign that helped place our product third in the market’s preference,” said Olvera. The company is planning to expand its facilities to incorporate an additional production line and push Nutrioli to become the leading brand in México while also exporting it to the United States.

The company’s main concern is to reach people who want healthy, appetizing products that are backed by a company with integrity and product knowledge. Ragasa is looking to become more integrated at the final product level in both the industrial and the commercial segments in order to achieve higher productivity and profitability, while presenting the market with better options than those offered by the competition. “We will continue to orient our product brand name to conquering new markets outside Mexico like the United States,” concluded Olvera.