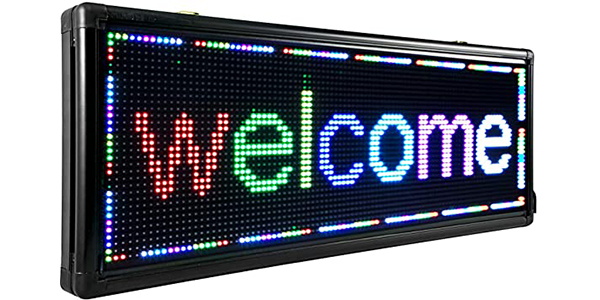 HiTech Electronic Displays (HiTech) was the first company to manufacture a light-emitting diode (LED) sign display in color. Ten years later, HiTech was the first LED manufacturer to produce specialized “LED on a rope” pixel technology with a “Wide-View” LED angle feature to solve unique mounting and display application requirements. It soon followed with a modular series of single-color message displays. Circuit boards populated with LEDs are mounted in an environmentally controlled, welded aluminum cabinet, behind a punched aluminum and UL approved polycarbonate face to allow virtually limitless size proportions with separate heaters in fans in each module.

If there’s a problem with being an industry leader for over 22 years, it’s deciding what you’re going to do next to top your previous achievements. HiTech doesn’t have this problem – it’s about to raise the bar yet again for a new standard in LED signage that promises to revolutionize design, installation and manufacture.

According to CEO Mike Mikurak, “Over the past year we’ve really been taking the pulse of the market, speaking to customers to identify to both how they’re positioned and where they’re headed, and how we could develop value-added products to support them. The result is an entirely new product platform that’s going to revolutionize the industry.”
In late 2006, HiTech introduced the patent-pending LoknLiteT, a programmable, plug and play modular LED signage system. “Modularity is not new to the marketplace,” notes Mikurak. “What is new is the plug and play capability that lets you build the sign on site literally by just locking it together in whatever configuration or size you need. And to add or take away modules as you need to without in any way degrading the look and performance of the overall sign.”

One of the limitations to modular configuration has been the weight of the signage frame. “Typically, frames are made of metal, either aluminum or steel,” explains Joe Cuenco, vice president of sales and marketing. “That not only makes them heavy and unwieldy, it also limits how many modular units you can gang together because if it gets too large, it tends to sag at the joints. One key distinguishing feature of our LoknLite initiative is that the frames are made of lightweight but highly durable plastic, which eliminates sag points because the weight is evenly distributed. That means you can build a sign in almost any width or length you want simply by locking modules together.”

Plug and Play
This unique capability has significant benefits from both creative and practical standpoints. “Not only can you create your own display, but you can easily modify your sign over its life by simply adding modules,” Mikurak says. “In the past, that generally wasn’t something you’d want to do. Sure, you could add a new module to an existing configuration, but the problem was that pixels on the newer module wouldn’t quite match those of the older components. Our LoknLite modules, in contrast, have specific LED boards that can be adjusted to match what’s there. The result is a seamless appearance regardless of when you’ve changed the sign or added new graphics. Moreover, the clarity and brilliance you can achieve is second to none.”

The flexibility to creatively enhance the sign also makes it the most practical way to build it. “The modules are light, so in many situations you can eliminate the need for heavy equipment,” Cuenco points out. “It also eliminates the need for skilled labor. It’s a plug and play system that just anybody can put together without any specialized training. It’s not an exaggeration to say that if you’ve ever put together Leggos, you can put a LoknLite sign together. It takes a lot of costs out of the installation process.”

An added advantage, he points out, is that signs can now be installed or upgraded throughout the year. “Typically in the Northeast and Midwest, the sign industry is working up until early winter, and then more or less shuts down until warmer weather returns. But because of their light weight and easy assembly, cold isn’t as much a hindrance to the installation of the LoknLite type displays

Another key advantage is easy programmability. “Say you’re having a special, once in a year event,” Mikurak says. “It’s no big deal now to incorporate short term advertising into your existing signage for as long – or as little – as you need it.”

Signing Solutions
Mikurak describes the new product line as “a strategic shift that’s different from anything anybody else is doing in the industry. We’re not just manufacturing a sign. What we’re bringing to the table is our ability to provide a digital solution to our sign customers that speeds delivery, provides flexibility, and literally helps them stand out in the marketplace.”
The new product introduction is just the start of an evolution that will eventually replace the previous LED line. “We’ll continue to support our installed base, of course,” Mikurak says. “But the LoknLite concept is our product platform for the future. We already have some new software and other enhancements that we will be announcing soon, all of which will further contribute to defining the future standards for digital display content.”

HiTech employs 210 and is based in Clearwater, Fla., where it maintains a 25,000-square-foot manufacturing facility. Annual worldwide sales come to about $30 million. The company sells directly to sign installation companies. “We have a very talented engineering and design team,” Cuenco says. “Sometimes our customers bring a design to us to manufacture, sometimes we come up with ideas for them to present to their customers. Of course, now with our LoknLite capabilities, that process becomes both easier and offers a wider variety of options.”

In fact, HiTech displays reached new heights recently at the National Broadcasters Association conference last April in Las Vegas, Nev. The Lightship Group (a subsidiary of American Blimp Corporation) used a HiTech manufactured 70′ x 30′ feet display containing 337,920 LEDs capable of broadcasting images, commercials, movie trailers, or any other kind of video image. The size alone is attention getting, but what really caught everyone’s eye is that the LED display is affixed to a blimp. What looks like a screen to people on the ground is actually a series of several hundred rectangular pieces resembling shingles that are fixed by rubber buttons into ultra-lightweight foam strips attached to the hull of the lighter-than-air blimp. The typical weight for a display of this size is 11,000 pounds, which would mean the blimp would never get off the ground. The reason it rises above is that HiTech was able to engineer an application that weighed less than 1,000 pounds. While the current model can run only one color, red, during the day, with a full spectrum at night, HiTech is manufacturing for American Blimp Corporation the next generation, which will be capable of full-color display during the brightest sunlight.

“While this is probably our most visible installation,” Cuenco remarks, “it is emblematic of out commitment to innovative engineering that defines the way electronic displays truly stand out to create excitement, attract attention and lead to new business.”

That illuminating comment explains why HiTech displays represent the signs of the times, both today and tomorrow.