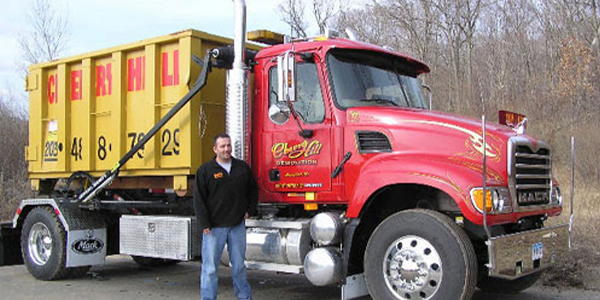 As our aging road infrastructure takes more of a beating in terms of the numbers and types of vehicles it handles, there’s more of a need to not only update existing systems but to expand these networks to facilitate growth, especially in the heavily traveled corridors of Washington, D.C., Maryland and Virginia.

For more than 30 years, Cherry Hill Construction, Inc. has remained focused on serving the region’s heavy construction needs. The company has successfully completed all types of civil construction jobs for public owners and private industry, under competitive bid, negotiated and design-build contract arrangements. With the resources to self-perform the projects it undertakes, this affords greater control of job schedules, more competitive pricing, better customer response and a highly motivated work force.ÿ
Cherry Hill has regional operations in Maryland, Virginia, Delaware and the District of Columbia with projects managed from its headquarters in Jessup, Md.ÿ Cherry Hill also serves clients in Florida from its centrally located division office in Lakeland, Fla.

The company was founded by James Openshaw who started with two partners supplying sand and gravel material for construction and then went into civil construction for roadways, interchanges and bridges. Today a $130 million company, Cherry Hill branches out across the MidAtlantic and Central Florida regions performing mostly bridge and roadwork as well as the occasional hurricane cleanup project. Recent projects include a $54 million contract for an I-95 bridge program, involving the construction of three bridges and additional structures within the bridges. The company also has been awarded a $44 million contract for the 9th Street design/build bridge project in Washington, D.C. The competitive, $44 million project, solicited by The Federal Highway Administration and Eastern Federal Lands Highway Division (EFLHD) is located on the 9th Street Bridge over New York Avenue, Amtrak and CSXT Railroad in Northeast Washington D.C. Ward 5. It entails the design and construction of a new parallel bridge on an alignment west of the existing 9th Street Bridge, and once the new bridge and adjacent roadways are fully operational, removal of the existing 9th Street Bridge.

Other high-profile projects include the first major contract of the Section 100 projects. This initial $53 million project, located in Baltimore County and Baltimore City, Md., is for the construction of a portion of I-895 northbound general purpose lanes from south of the Moravia Road interchange to north of the I-95 interchange, a total distance of 1.2 miles.
The project includes the construction of the following:

Two northbound lanes for I-895;
modifying two entrance ramps at the Moravia Road interchange;
a new bridge that carries I-895 northbound traffic over Moores Run and I-95 southbound and I-95 northbound;
bridge replacements and approach roadway for Moravia Road and Moravia Park Drive over I-895;
a noise wall at the north end of the project.

Such activity is proof of Cherry Hill’s prowess in its industry. “We’ve got long-term experience in the marketplace; we have skilled individuals and a solid reputation,” stresses Jerry Herr, vice president and CFO. “We’ve been a stable company our whole existence.”

“This acquisition extends Perini’s civil construction presence into the MidAtlantic and Southeast regions and is expected to make a positive contribution to Perini’s operating results in 2005,” said Ronald N. Tutor, Perini’s Chairman and CEO, when the purchase announcement was made. “Cherry Hill’s strong regional reputation as a builder of choice for heavy civil projects and its complementary client base make for an excellent strategic fit with Perini’s existing operations.”

“Perini gives us more resources at our disposal,” Herr adds. “It brings more construction expertise to us.”

Cherry Hill itself brings to the table a well-respected business and a dedicated staff of over 500 construction professionals that have built a strong company with demonstrated in-house capabilities in the following areas:

In the areas of bridge and roadwork Cherry Hill has acted as general contractor and subcontractor, traditionally self-performing 65 percent of the work and sub-contracting out 35 percent. “As we move forward this is divided more 50/50,” Herr says, explaining that the company is also steering from $2-$5 million jobs to focus on $30 million projects, which offer a larger return with less expense of employees and resources.

Award-winning projects
Among the company’s many notable projects was one that ended in the summer of 2003 when Cherry Hill completed the primary earthwork for the United States Capitol Visitor Center Project in Washington, D.C.ÿ The Visitor Center required the phased excavation of more than 600,000 cubic yards of soil and demolition rubble, which was completed at an aggressive pace to support the project’s fast track and ever-changing schedule.ÿ The excavation consisted of a gigantic, 50-foot deep hole located directly beside the Capitol Building’s east side, a 1,000-foot curving, open-cut trench excavation under Constitution Avenue for a connecting truck tunnel, and a pedestrian tunnel under First Street connecting with the Library of Congress.ÿÿ

As a key subcontractor to Centex Construction, Cherry Hill’s $13 million scope of work also included all locating and test pitting for underground utilities on the site and beneath the surrounding streets of Capitol Hill, site sediment and erosion controls, Capitol Hill street maintenance services for the project, site demolition, traffic control for construction of the off-site tunnel structures, and a large diameter utility tunnel.ÿ

In addition, Cherry Hill provided several major items of enabling work to support the temporary site infrastructure and to perform selective demolition of conflicting portions of the existing Capitol building.ÿ

For its hard work Cherry Hill was presented with the “Centex Outstanding Subcontractor Award” in recognition of the “performance, professionalism, enthusiasm, positive attitude, integrity, and teamwork of the Cherry Hill Team.”

Another project entailed three back-to-back widening contracts for the State Highway Administration on U.S. Route 1. The most significant improvement was resurfacing and widening the roadway, which created left turn lanes, including one for safe turning into the Cherry Hill Building.ÿ

The second project consisted of widening, resurfacing and installing new curbs and gutters, concrete sidewalks, storm drainage systems and replacing existing traffic loop detectors.ÿ The most challenging part of the project was installation of 5,300 feet of a 12-inch water main.

Finally, Cherry Hill was awarded the third project, which linked the previous sections and consisted of geometrical improvements at the intersection of U.S. Route 1 and Maryland Route 175.ÿ According to an account of the project on the company’s Web site: “Everyone who is using this very busy intersection understands that the biggest challenge to our crews was the large volume of traffic.ÿ With skillful planning, consistent organization, working off-peak hours and night shifts, the contract was successfully completed.”

Another award came for the group for its involvement as part of a design-build team consisting of Greenhorne & O’Mara (G&O), Cherry Hill and the Montgomery County (MD) Department of Public Works and Transportation. The team received the Design-Build Institute of America’s (DBIA) National Capital Chapter Excellence Award for the Georgetown Branch Interim Trail and Trestle Bridge project in Montgomery County, Md. The Georgetown Branch Interim Trail serves as an important east-west link in Montgomery County’s system of bike trails and has historical significance.

The most challenging task for the team was to develop an innovative solution for the trestle bridge design and construction that would meet the budgetary and time constraints, while providing a structure that complements the site and still maintains the historical appearance of the existing bridge. The prevention of environmental impact to the park was also of prime importance and was a significant factor in the solution.

But this type of hard work is common for Cherry Hill, which provides its valuable insight time and time again, tearing down bridges . and building them up again.