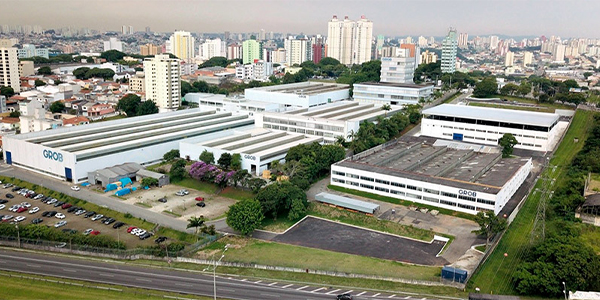 It is not surprising that Grob do Brasil, founded in 1956, has been so successful. The idea of implementing an infrastructure similar to its parent enabled the company to spread its seeds and blossom beautifully.

Instead of a fate as a dependent branch of Grob headquarters in Germany, providing cheaper labor and raw material, Grob do Brasil stood firm on its on feet. Shortly after its founding in Brazil, difficulties inherent in long-distance management and excessive obstacles with export logistics in the country almost made the company close its doors. The determination and vision of Siegfried Haimler, its president at the time, convinced Grob to keep the company independently managed, looking to its parent only for engineering development support.

Grob do Brasil evolved into a self-managed company with minimal bonds with Grob in Germany. Ever since, the company experienced continuous growth, accelerated by the Brazilian government’s fondness of industries that manufactured machinery locally. Five years after inaugurating its first stockholders book, B. Grob do Brasil S/A opened its plant in São Bernardo do Campo, in São Paulo state, located in a major industrial “paulista” pole.

From its start as manufacturer of machinery for steering screw polishing, Grob do Brasil directed its machinery production towards what is now one of its main niches: special machines and complete manufacturing systems for the automotive and hermetic compressors industries. In 1971, Grob do Brasil built the first Transfer machine, which five years later resulted in the start of the production of Transfer machines specifically designed for the refrigerator compressors industry, such as air conditioners and refrigerators. Transfer technology offers the advantage of very short cycle times. This technology was key in developing the long-term relationship with giants in the hermetic compressor
sector such as Embraco. The Brazilian manufacturer and world leader in the production of hermetic compressors, is today part of the North American group Whirlpool with subsidiaries in Europe and China. Another key player is the American company Tecumseh, whose compressors for air conditioning and refrigeration products, gasoline engines and power train components for lawn and garden applications, industrial pumps, and small electric motors products are sold in over 120 countries. One hundred percent of Tecumseh’s and Embraco production in Brazil utilizes Grob machinery, nothing less than 45 million compressors a year.

Occupying over 40,000 square meters with average revenues of $70 million for the last five years, Grob do Brasil needed to find creative ways to occupy idle productive capacity of its engineering, construction, assembly and machinery manufacture abilities. The company is known for vertical infrastructure, outsourcing only about 5 percent of its production, such as electronic components and bearings.

The decision of sharing installed capacity with Germany and the USA was a result of a lack of heavy investments in the modernization of the Brazilian automotive industry. Instead of improving the machinery, the industry has just been replacing existing machines. “The automotive industry in Brazil has kept the same technology for the engines manufactured 20 to 30 years ago. With few exceptions they just replace auto bodies with new models but the power train remains the same. In some cases they also import old manufacturing lines from Europe. It’s difficult for a company with Grob’s potential to keep competitive this way,” explains Pfeiffer. The step that Grob do Brasil took towards its expansion abroad strongly improved the exports, which now represent about 70 percent of its capacity.

Future Power
As a leader in the market for special machines and horizontal machining centers, Grob do Brasil has grown 40 percent in the last five years and achieved worldwide recognition for its quality products and serious commitment. From 1997 until 2003 the company completed its international qualifications regarding quality, process and environmental management systems.

Today, Grob do Brasil holds ISO: 9001 and 14001 certifications, including 2003 DIN EN ISO 9001-2000 and 2003 DIN EN ISO 14001-1996. In 2001, the company also obtained a letter of full compliance to QS900 and TE supplement, which is the American automotive industry quality system. “As a company with all departments of operation working at full force, we offer proposal engineering, engineering, planning, production, assembly, try-out and service. This means we have a very strong and lean organization with very quick response for the customers’ needs. Our lead time for special machines and customized machining centers is comparable to some Stand Alone machine competitors,” assures Pfeiffer.

Supplying the world with the same quality standard as Grob in Germany, Grob do Brasil is able to share in big projects with Germany and USA. The “tropicalization” of the machinery production by mixing some imported items and others produced in Brazil is possible due the presence in Brazil of worldwide component suppliers as Bosch, Parker, Siemens, SEW and others. The Brazilian tropical way of manufacturing has been very well received by the market.

The highlight has been the development of Grob’s engineering towards providing projects turnkey, and its commitment to help clients reduce investment costs. In the last five years, Grob has supplied numerous high-speed machining centers and gantry loaders for automatic load and unload of machines. After opening a new 10,000-square-meter assembly area in 2004, the company exported to General Motors in China and in Mexico.

It has also made available in São Paulo the first “G” module, the new generation of machining centers and special modules specially designed in the headquarters in Germany to simplify the automation of the lines and reduce the lead times as well as the installation times.

The future seems bright for Grob do Brasil, which is working closely with Germany to design stand-alone machines with short delivery times.

“We want to supply our customers with the most advanced technology available, Our customers want Grob machines but some don’t want to wait for delivery time for a custom-made machine. What we don’t want to do is sacrifice the quality of our product just to get better prices or lead times. We are looking for intelligent solutions that simplify the production of the machine itself, reducing the cost and consequently the price. The reputation of Grob as a synonym of quality will remain untouched. We want also to develop the assembly machines production in Brazil, following the example given by Grob in the USA.”

He adds, “This is a market that should face a stronger currency in Brazil and more expensive labor, taking into consideration that this kind of equipment depends on several imported sub components. Our goal is to continue to provide high quality machines that endure time.