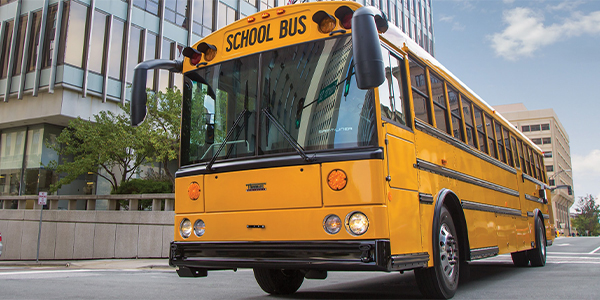 If the closing of Southern Car Works in 1916 had not occurred one less inductee would have been honored last fall by the North Carolina Transportation Hall of Fame.

But economic hard times caused by World War I did force the closure, which caused Perley A. Thomas, the company’s chief engineer, to look for work. Luckily later that same year, the Southern Public Utilities Company in Charlotte, N.C., asked Thomas to renovate several streetcars he had designed for his former employer. So Thomas regathered many of his former coworkers, purchased a building in downtown High Point and opened the Perley A. Thomas Car Works and the Thomas-built streetcar soon became a staple in many urban corridors across the country.

When streetcars saw their demise in the 1930s, replaced by more efficient modes of mass transit, Thomas launched a new product: school buses, enhanced with a number of safety features that were unheard of within the realm of school transportation, in which buses were nothing more than flatbed truck chassis with wooden sides and a canvas roof. They had no lights, no mirrors and, according to the history of Thomas-Built Buses, “were much more suited to transporting vegetables to market than children to and from school.” Thomas’ buses soon became the standard.

Because of his role in pioneering the modern school bus, Thomas joined the likes of the Wright Brothers during last fall’s North Carolina Transportation Hall of Fame ceremonies. The company that today bears his name is no less innovative, tapping into the resources of parent Freightliner, a wholly owned subsidiary of DaimlerChrysler, to engineer school buses that consistently prove what Thomas knew so well: design innovation and commitment to quality manufacturing would continue to bring the company success and advance the industry.

To greatly enhance this operation, Thomas Built Buses recently introduced its completely new Saf-T-Liner(r) C2 school bus. At the time of the introduction, John O’Leary, president of Thomas Built Buses, said, “The Saf-T-Liner C2 doesn’t look like any other bus on the market today because we started with a clean sheet of paper. We held focus groups and developed a group of nearly 1,000 industry professionals to survey. We listened to what school transportation directors, technicians and drivers told us they wanted in a school bus. We combined those ideas with advanced technologies to create an all-new, Type C school bus for the 21st century – the Saf-T-Liner C2.”

In addition, the 2,700-square-inch sloping windshield delivers the largest visibility footprint in the Type C category and is bonded to the body for increased structural integrity.

Manager of Marketing and Sales Support, Allan Haggai notes that a system of structural adhesives and self-piercing rivets similar to systems used in the aerospace industry give the bus its durability. “The technology has been around for a while, but now it’s being utilized in automotive applications. The combination of adhesives and rivets results in fewer fasteners, which gives the bus a sleeker look, fewer potential leak points and substantially stronger joints,” he says. Sample joints demonstrated nearly twice the strength of riveted joints in standardized FMVSS 221 compliance tests. In addition, the welded floor, rafters and stringers form a solid structure that when bonded to the side panels, create a single, strong, unitized body that provides stability and durability. Tests indicate that adhesive joints can maintain a higher percentage of integrity throughout the life of the bus when compared to rivet-only joints.

Another industry first: a recessed eight-light warning system that improves reliability and reduces maintenance. Because the system is flush-mounted, there’s less opportunity for damage by tree limbs and low-hanging objects. Made with Lexan(r), the lights resist impacts from rocks and other hazards. Changing bulbs is routine because bulbs are easily accessed through built-in service areas from the interior of the bus. It will no longer require removal of the entire fixture each time a bulb is changed, thereby reducing technician time, effort and cost.

The C2 will be built at Thomas’ new technologically advanced manufacturing plant in High Point, N.C. Thomas Built invested $39.7 million to build and equip this 275,000-square-foot production facility with state-of-the-art capabilities such as a three-quarter-mile-long assembly line with 75 workstations capable of producing 22 buses per shift (when the plant reaches full capacity) in addition to an electronically controlled conveyor system that moves the buses through the line. A just-in-time logistics process is used and materials are delivered on custom carts to specific assembly points to ensure maximum efficiency in the production process.

“We delivered the first C2 last October, but we’ve been doing product demonstrations with our prototypes since January of last year,” Haggai says.”

Products for every need
Other buses offered by Thomas Built include the Minotour, a smaller, specialty bus with value-added features that include full height outward-opening entrance doors for easy on and off movement, a spacious interior with center aisle and a body structure that has a “big bus” feel and an optional diesel engine chassis for longer lifespan and fuel economy. Recently, Emerald Center, a non-profit agency serving children and adults with disabilities in five counties in South Carolina, took delivery of 13 new Minotour buses. The center serves more than 1,000 clients and logs more than 3,000 miles each day transporting children and adults to its three facilities.

The Type D Saf-T-Liner transit-style school bus services denser routes and has greater seating capacity. Performance enhancements keep it on the road longer. As Haggai explains, the Type D is a flat-nose bus with the front axle behind the driver. “The Type D product is designed for more demanding operating conditions found primarily on the West Coast,” Haggai says. “It has bigger power train components for more rugged terrain.” The Type D is distinguished from its lighter counterpart, the Type C, whose nose sticks out with the engine and front steering axle in front of the bus body, not in it. The Type C is the choice for routes with the most common operating conditions.

When purchased by DaimlerChrysler, the majority of Thomas Built’s commercial bus business was rolled into the automotive OEM’s commercial bus segment. Explains Haggai, “The extent of our commercial vehicles now is maybe for church, college and university use; a number of commercial units for government service agencies and specialty vehicles.” In the specialty area, Thomas Built sells unfinished bus shells to Matthews Specialty Vehicles of Greensboro, N.C., which then upfits the vehicles for numerous special applications, such as mobile police command centers.

With the total school bus market at about 38,000 in the United States and Canada, Thomas Built has captured a 39-percent market share, which equals an annual production output of approximately 15,000 buses.

But the fact that Thomas Built is considered the largest school bus producer in the world is really a misnomer, Haggai adds, because few other nations outside North America utilizes the school bus. “It’s primarily an American/Canadian market,” he says. “School buses aren’t made in significant numbers anywhere else in the world. It’s unique to our culture.”

As a division now of Freightliner, and with the advantages of being a part of automotive giant DaimlerChrysler, Thomas Built not only has the advantage of being affiliated with major chassis and engine suppliers but also can take advantage of economies of scale on component purchases – more volume equals better buying power, Haggai says.

DaimlerChrysler played a significant role in the development of our new plant. We brought in their manufacturing experts to help us employ the best possible technology and to assist in developing our plant layout.”

In addition to this ability to tap into the expertise of industry leaders, Thomas Built can also rely on its own tradition of engineering and design superiority. Adds Haggai, “We have been a company with a strong heritage of moving people since 1916; the integrity and strength of our bus bodies sets us apart. Our Saf-T-Liner C2 has now put us years ahead of the competition.”