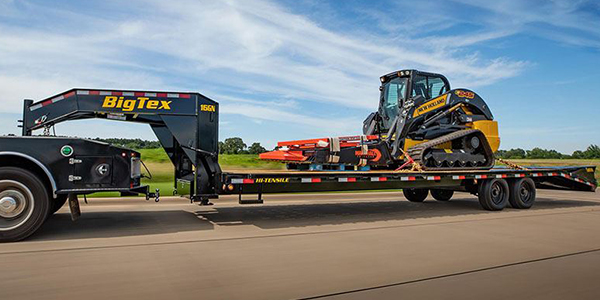 Big Tex Trailer Manufacturing Inc. lives up to its name in more ways than one. While all three of its plants are located within the Lone Star State, its facilities at Odessa in West Texas and in Mt. Pleasant on the eastern side of the state are a whopping 500 miles apart – a good day’s haul.

But at Big Tex Trailer, the company’s vision is even more sprawling than its home state. Starting out working on trailers after school and on weekends when he was just 17 years old, colorful founder Ricky Baker has built Big Tex Trailers into the nation’s largest producer of utility trailers, churning out nearly 40,000 a year, or more than three times its closest rival.

Ironically, Baker once told an interviewer that he didn’t name Big Tex Trailers for either the state or his ambition, but for an ornery old longhorn steer that belonged to his father-in-law.

“He’d jump every fence there was,” Baker said. “Tough. Couldn’t hurt him. He had one of the prettiest longhorn racks you’ve ever seen on a bull. His name was Big Tex. So when I was thinking of a name, it was kind of, ‘Hey, Big Tex Trailers.'” That also inspired the motto that has remained with the company to this day” “Tough as a Texas Longhorn.”

Emphasis on quality
From its humble beginnings, Big Tex Trailers has come to dominate its industry by any measure one could think of. The company, headquartered in Odessa, has some 500 employees working on state-of-the-art assembly lines, manufacturing trailers that are sold nationwide by a network of 350 dealers, also the largest of its kind.

Jim Callaway, the executive vice president for Big Tex Trailers, said the company has been able to stay on top by producing trailers more quickly and efficiently without sacrificing quality “The customers are very demanding, and they expect a high-quality product,” Callaway said. “And they continue to demand better value in the products that they purchase. Reliability is critical.”

Much of that is the result of the 43-year-old Baker, who was recognized a couple of years ago by Ernst and Young as its Southwest Entrepreneur of the Year, at a time when others were fawning over high-tech and Internet moguls. In his trademark uniform including Wranglers and boots, Baker is a frequent sight on the assembly line, exhorting his employees.

When he was still a teenager in 1976, Baker started working with a Mt. Pleasant, Texas, builder named Jerry Bragg, who built 16-foot utility trailers in a tiny two-bay ship. They expanded to become Texas Bragg Trailers with a 5,000-square-foot shop, and with Baker owning a share that he sold at the tender age of 22 to start his own firm on the other side of the state. For the next few years, the young entrepreneur drove around the Southwest, sometimes sleeping in his pickup truck, seeking to build up a dealer network. It took little more than a decade for Big Tex Trailers to become the nation’s largest seller of utility trailers.

Those are produced in three separate plants that, combined, can make a new trailer every few minutes. While the “North Plant” at Odessa focuses on so-called “dump trailers” and larger industrial models, the other plant in Odessa and the one in Mt. Pleasant use a monorail production system similar to an auto plant. Callaway said the ever-expanding plants now cover a total of 200,000 square feet.

Working the monorail
The monorail-based assembly line is one way, Callaway said, that Big Tex Trailers carries out its vision of “doing things simpler with a fewer number of people – to not waste time and money.”

Another is a unique-to-the-industry, multi-step paint system that allows Big Tex Trailers to change paints more easily than its competitors. At its paint shop, the surface metal is hand-sanded, deburred, and contour ground. Next, the trailer goes through a high-temperature, high-pressure wash, a phosphatizing system that deep-cleans the metal and creates an ideal surface for paint adhesion. The trailer is dried and select surfaces are masked off.

The trailer moves into the primer booth, where it is primed with two coats of modified primer that prevents corrosion, and is then undercoated. The trailer receives two coats of enamel sent from the paint kitchen, where a number of paint mixing vats is located. A painter can change colors quickly by manipulating valves that lead directly to the paint kitchen before the trailer proceeds through the drying ovens. This gives Big Tex Trailers the capability to produce automotive-like painted trailers.

Callaway said that Big Tex Trailers also has a new transportation center in Odessa that will allow the company to double its shipping capabilities. Additionally, it has a new computer system that Callaway called “a total solution for the company, for everything from manufacturing to accounting to sales to whatever. We want anything that will allow us to make improvements in how we do things and make us more efficient.”

While the streamlined production facilities at Big Tex Trailers allow the company to produce models more quickly than the competition, Callaway said the firm also maintains the ability to do small, specialized orders. “We do a lot of special trailers, even with our automated production,” he said. “I think the company is very flexible about that.”

As the company’s trailer production has expanded, the company has placed increasing emphasis on a division called Tex-Trail Inc., a parts division that has retail outlets but is largely wholesale, especially to the company’s broad network of dealers. Callaway said the company also has an internal sales staff that deals closely with the dealer network.

Ultimately, though, the success of Big Tex Trailers is the result of holding onto its longhorn-tough mentality. “I think the bottom line is being very aggressive in how we go to market,” Callaway said. “We’re offering the product that the customer wants, and we’re aggressively recruiting dealerships where we have open areas in the past and filled the voids. We haven’t allowed the soft economy to change our mindset – that it’s impossible to grow without being aggressive.”