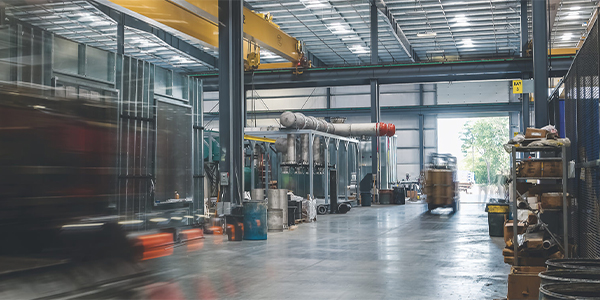 Building a better stock tank – carefully constructing durable, pre-assembled tanks from copper-bearing galvanized steel that wouldn’t rust or leak – was the idea that Emanuel Norquist was perfecting when he met Charles Butler in Clay Center, Kan.

When Butler saw Norquist’s new steel stock tank, he also saw enormous untapped sales opportunity. The two friends believed the product had great market potential. Fortunately, both Butler and Norquist had the courage to take economic risks in order to pursue their goal. Homes were sold and jobs were lost, but with the financial help of Charles’ brother Newton Butler, Butler Manufacturing Company was launched in 1901.

In 1909, Emanuel Norquist had a need to shelter the Metz automobile he was about to finish assembling. His brother, Victor, set out to construct a small garage. Using the materials he knew best, he designed and constructed an all-steel framework to which were bolted corrugated galvanized steel culvert sheets, which gave the garage an arched roof and lasting strength.

Butler Manufacturing Company noticed that there was growing demand from the public for sturdy garages. The design was modified to be more cost effective, and by 1910 the first Butler building was sold. That first building stood in use in central Kansas City for more than 45 years. When Butler introduced a sturdy two-car version of the garage the market response was immediate, and Butler Manufacturing Company was in the building business for keeps.

Throughout Butler Manufacturing Company’s long history, many products have come and gone. Emanuel Norquist’s mechanical aptitude and incessant tinkering were always directed toward making things better by making them simpler, less costly, and easier to handle. Charles Butler’s intuitive sales and marketing abilities were equally directed toward knowing exactly what the customer needed, then satisfying that need with personal service. This combination worked excellently for grain bins, and would prove itself again in pre-engineered metal buildings.

Roofs, Walls & More
With manufacturing plants in Pennsylvania, Illinois, North Carolina, Texas, California and Mexico and over 3,000 employees, Butler Manufacturing Company is a leader in the marketing, design, and production of systems and components for nonresidential structures. Products and services are provided within the commercial, community, industrial, and agricultural markets.

Butler currently operates manufacturing, engineering, and service centers throughout the world. The company’s products are primarily sold, installed, and serviced through approximately 1,600 independent dealers in North America and throughout the world affectionately known as “Butler Builders(r).” Butler also provides complete design/build construction services directly to large customers with multiple sites or with products of unusual size or complexity.

The businesses of the Building Systems segment, the company’s largest segment, are involved in the design, manufacture, marketing, and sale of steel frame pre-engineered building systems. This segment’s products consist primarily of custom designed and pre-engineered one to five-story steel buildings for use as office buildings, manufacturing facilities, warehouses, schools, shopping centers, and agricultural buildings, among others.

The Architectural Products segment includes the businesses of the Vistawall(r) Group. These businesses design, manufacture, and market architectural aluminum storefront and engineered curtainwall systems; Naturalite skylights; Skywall translucent roof and wall systems; and Modu-Line window systems. This segment’s products are primarily targeted for use in the office and commercial construction markets. The MR-24(r), specifically designed to accommodate roof movement, is the most specified metal roof on the market and comes with a 25-year warranty.

“We’re seeing a trend in that we’re constructing fewer manufacturing buildings and more schools, gymnasiums, community centers, strip malls, etc.,” says Ron Miller, vice president of marketing for Butler. “There is more of an emphasis on appearance and design for these structures. We design buildings with interesting geometry, overhangs, dormers, different framing options, tapered columns, straight columns, a variety of bay sizes and eave heights, single slope, double slope – just about anything the customer can imagine for their structure.”

The Construction Services group provides comprehensive design, planning, and construction services for major purchasers of construction. Emphasis is placed on those segments of the market where products supplied by Butler’s metal buildings division have appropriate application for the customers’ requirements. Projects are executed primarily in conjunction with Butler Builders located in the markets where the facilities are constructed.

The Real Estate segment provides build-to-suit-to-lease development services for major corporations who prefer to lease, rather than own their facilities. Butler Real Estate capitalizes on the extensive construction capabilities of the Butler Builder(r) dealer network for project execution. Completed facilities are sold to permanent investors.

Acquire and Grow
Never a company to rest upon past success, Butler forged ahead in the 1980s with several acquisitions. These transactions aimed to exploit new markets and increase market share in existing businesses.

In 1984, Butler acquired Howmet Architectural Products from Alumax Aluminum Corporation and subsequently renamed it Vistawall. Several acquisitions were made during the late-1980s and mid-1990s to expand Vistawall’s presence in the architectural aluminum markets and further strengthen its powerful market presence. Today, the Vistawall group provides customers worldwide with a broad line of engineered aluminum framed curtain wall, windows, storefronts, entrances and skylights.

During the 1990s there was a significant worldwide expansion by multinational manufacturing companies. Butler Builders has constructed hundreds of these manufacturing plants and distribution centers throughout the world.

As Butler approached its 100th anniversary, the company remained faithful to its history. Globalization directly correlated with Charles Butler’s and Emanuel Norquist’s desire to meet the customer’s needs, wherever those customers may be. Through it all the company has learned that it does best when it focuses on its core strength, providing distinctive products and services to the non-residential construction market – products that provide genuine value to the dealers who represent Butler and to the building owners who rely upon Butler.

April 2004 marked a new chapter for the company Butler Manufacturing merged with BlueScope Steel, headquartered in Melbourne, Australia. Bluescope is the largest steel producer in Australia and New Zealand. It manufactures steel slab, hot and cold rolled coil, plate, tinplate and metallic painted and coated steel products such as the market-leading COLORBOND(r) and ZINCALUME(r) steel brands.

“Today, Butler’s size and scope would amaze its founders. But the core values that formed such a solid foundation for Butler’s beginnings remain distinguishing characteristics today,” says Miller. “They will continue to serve Butler Manufacturing Company well in the years to come.”