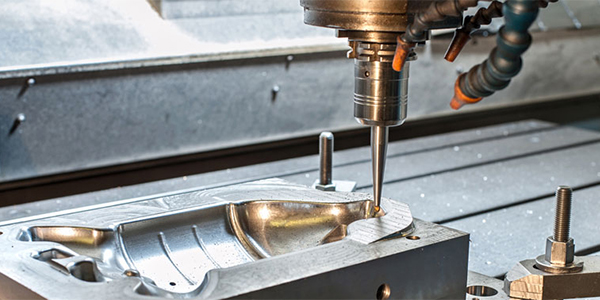 Zinc to Aluminum Migration
The company’s name reflects some details of its birth, as it was founded on Albany Street in Chicago, Ill. in 1953. As it grew and established its identity, Albany Chicago progressed from making zinc decorative parts to making aluminum mechanical parts. “We started as a plating company, and our plating evolved into casting decorative parts for consumer markets like televisions and refrigerators,” recalls Hal Gerber, the company’s Engineering and Technology Leader. “In the 1960s, as more of those castings went into plastics, we moved into machining castings. At first, we produced primarily in zinc. In the late 1970s, we began pouring aluminum, and our demand for zinc began to fade away.”

In 1983, the business was purchased by Orion Corporation, a larger company located in Grafton, Wis. “About that time, we negotiated for bigger projects and needed to expand,” relates Gerber. “We expanded, continued to grow, and finally moved to our new facility 1993.”

Today, the Die Cast Division is headquartered in Pleasant Prairie, Wis. The move to Wisconsin was driven, in part, by the company’s need to access a larger and more highly skilled work force that could handle the larger projects.

In 2005, the business officially became known as the Albany Chicago Company when the Orion Corporation underwent a corporate restructuring. Before the makeover, Orion’s die cast business (Albany-Chicago) and its bearing business (Orion) were owned and managed as divisions that operated independently of each other. In September 2005, the die cast business was transferred to a new, wholly owned subsidiary named “Albany Chicago Company,” while the bearing business was transferred to a subsidiary named “Orion Corporation.” At the same time, the parent company was renamed CPL Industries, Inc. The rationale behind the changes was to create a more efficient organizational structure for the business units.

The Albany Chicago growth focused on parts of ever-increasing size and complexity as it moved exclusively to aluminum die-castings. “We became progressively adept at making larger castings, migrating toward castings produced in machines requiring locking force between 1,200 and 2,500 tons,” says Gerber. “These castings are used on large equipment with difficult mechanical, and structural needs, requiring extensive machining, and assembly operations.”

Manufacturing cells are designed with quick-change tooling and fixtures to support just-in-time deliveries. Further, the company uses advanced quality planning and failure mode effects analysis (DFMEA and PFMEA) to enhance its processes. The company has been adopting more and more robotic automation on its machining and casting side, according to Gerber.

The larger size and technical reliability of the casting equipment enable Albany Chicago to make castings that weigh anywhere from one ounce to 100 pounds. The die casting process is computer-controlled and monitored on each casting machine. In this way, the company can set specific parameters for each part to ensure part-to-part and run-to-run consistency. Advanced technologies implemented in the machines include closed-loop servo-controlled shot ends, proportional control valves, thermal monitoring, vacuum, and real-time data feedback. Besides robotics, the cell automation includes part extractors and atomizing reciprocating sprayers.

As a QS: 9000-registered organization, Albany Chicago is strongly focused on quality assurance. To this end, it employs a combination of automated coordinate measuring machines, spectrographic analysis for alloy, computerized X-ray machines and other measuring instruments to assure that all castings and machined assemblies are produced to precise specifications. Quality extends to delivery as well, as Albany Chicago can deliver certified parts directly to customers’ assembly lines.

Engineered Success
While Albany Chicago’s customers include OEMs in diverse industries, the company has focused on diesel engines. “We produce castings used in diesel engines for most of the heavy-duty truck engine manufacturers,” says Gerber. “These would be for engine components used on the OEM’s units. We make castings for all of the exterior applications that attach to the engine blocks such as covers, coolers, filters, or mechanical bracketing.”

Product development is driven by Albany Chicago’s engineering activities. The company provides full-service, in-house engineering solutions suitable for customers’ specific casting needs. “What we bring to the table, which is a little different than some of our competitors, is a very strong out-front engineering, both in product and process design areas,” says Gerber. “This includes the most advanced simulation tools and analysis techniques, enabling us to help our customers model their components for economy and maximum use of the opportunities that our processes offer.”

Albany Chicago designs in solid models – products are native PRO-E: or SDRC-Ideas – and they simulate and optimize the casting shapes and features, integrating economy and suitability to customer function. The design and simulation of the process is then developed around the engineered geometry, according to the company.

Finite Element Analysis (FEA) is critical to their development process. The FEA method, used to analyze structure and obtain stress distribution, involves dividing a structure into elements, describing the behavior of each element, and then reconnecting elements at “nodes” to predict static and dynamic behaviors in application of the entire casting system. Albany Chicago uses ANSYS to perform this analysis to improve customer structures.

Also, casting simulation is a critical component in the process development phase of all projects. The company uses FLOW3D, a CFD package and other proprietary software to ensure the process is engineered as carefully as is the product design. The simulation link, targets close relationships between product design, process design, and operational planning to insure effective execution.

Skirting the Negatives
As he assesses the overall casting industry picture, Gerber perceives some significant and negative trends. For one thing, he sees an eroding market, as more purchases are being made outside of the United States. “More and more, products are now being moved overseas and into adjacent countries. Increasingly, OEMs are purchasing components abroad,” he remarks.

At the same time, he sees a continuous rising tide in the “commoditization” of castings. Still, Albany Chicago doesn’t seem adversely affected by these developments, mainly due to its individualist approach. Regarding this trend Gerber says, “…When you have complex castings, it is a little difficult to think of them in terms of raw pounds. A 10-pound casting is not just the same as every other 10-pound casting; the individual properties required for complex casting applications separates the simple from the difficult” he explains. “So, our particular parts tend to have more feature complication, and are more difficult to manufacture, due to pressure requirements, structural requirements, or close tolerances.”

As such, the company has managed to maintain substantial and steady growth over the past several years. “We have been growing at a rate of between 10 and 15 percent a year,” says Gerber. “But we’re making sure it’s the right kind of growth, and that means involving ourselves in the right kinds of projects that allow us to add value to customers in a way that make the most sense. Everyone can make simple parts, but not everyone can make complex parts. It is a matter of making sure that we apply our skill sets that handle the complex applications to the right customers.”

Judging by its steady growth, in terms of company size, project complexities, and revenue, Albany Chicago appears to be hitting all of those “right” targets. It puts one in mind of the parent company’s namesake, Orion the hunter, and an exclamation he may have once voiced: “Bulls-eye!”