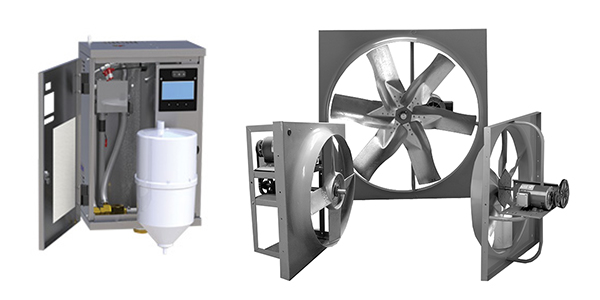 The Carnes Company started out small. The very first job for the Verona, Wis.-based business came in 1939 when a contractor building a new home asked the company founder, William Carnes, to fabricate one piece of metal: a roof cap.

Last year, the privately held Carnes Co. fabricated and built more than 100 one-of-a-kind customized metal products every day – or nearly 25,000 over the course of the year.
“That’s a lot of customizing,” said Dave Stankevich, the company’s sales and marketing manager. Just like one of its ventilation units, the Carnes Co. is not a firm that makes a lot of noise, yet this quiet, can-do company, which now distributes its product lines throughout North America, is a leading name in the commercial heating, ventilation and air conditioning, HVAC, industry. Its chief products are ventilation, (fans) diffusers, registers & grilles and VAV systems for commercial buildings.

Although some of its products may be as familiar as the diffuser above your office cubicle or the familiar mushroom shape exhaust fan on your office building, Carnes also has been responsible for some important HVAC industry innovations. For example, the company was into energy conservation long before the oil embargoes and gasoline lines of the 1970’s.

First in energy recovery
In fact, Carnes has been a top name in energy recovery systems for commercial buildings ever since the 1960s when the company’s engineers developed one of the first-ever wheel technologies, with a desiccant media coating, to recover lost heating and cooling while assisting in humidity control.

This energy recovery wheel technology is still a major product line for Carnes. It can increase the efficiency of cooling and heating systems by up to 300 percent with full latent recovery, unlike plates or heat pipes. The company states that its energy recovery wheel can reduce HVAC operating costs by up to 80 percent, while reducing the expense of initial HVAC purchases by allowing builders to downsize their required cooling and heating capabilities.

Carnes initially saw rapid growth in the years following World War II, as America experienced a construction boom. “They basically made all sorts of things to keep all the building and construction going after the war – there was so much pent-up demand,” Stankevich said.

Fighting indoor pollution
The last decade also has been a good time to be in the HVAC business. The economic boom of the 1990s and low interest rates led to a sharp rise in construction. And growing concern about the problem of indoor air pollution has caused many companies with older buildings to look for a complete overhaul.

Today, the company employs about 500 people, some 325 at the company’s main plant in Verona, a small suburb near the state capital of Madison that calls itself “America’s Hometown.” Carnes employees have been very active in community and charitable affairs in Verona. Carnes also has plants in Madison, Sanford N.C., and has a distribution center on the West Coast.

Stankevich said it makes little sense to market and ship its custom-made HVAC products outside of North America. “Metal can be bent anyplace, and it costs too much to ship air,” he said.

Most of the products that Carnes sells are installed in commercial buildings, such as schools, hotels, and mid size office buildings. You can see many of its best-selling products – such as grilles, registers and diffusers – if you look up at the ceiling of your office or your child’s classroom. Carnes makes a wide array of diffusers that aid in air distribution and return: louvered, perforated, square, rectangular or round. Its registers and grilles are manufactured from steel, stainless steel, or aluminum. For certain specialized customers such as gymnasiums or psychiatric wards, the company makes heavy-duty registers and grilles made with Sturdicore technology, and feature rounded face bars technology to prevent injury.

Out of sight in the ceiling and walls is another critical part of the HVAC system which is critical to a healthy building, the VAV system. Carnes builds a complete line of air terminal units designed to control the airflow and temperature in commercial buildings. Stankevich said: “Air terminals are an integral part of most variable air volume HVAC systems today.” Twenty-six different models are offered for applications such as hospitals, schools and office buildings. In addition, a variety of clean air terminals are available for computer rooms and laboratories.

Keeping moisture in
The growth of high-tech manufacturing – such as clean rooms for manufacturing electronic assembly, computer rooms and specialized health-care equipment – has meant that more and more companies need to closely control the humidity levels in these rooms. And that has been a boon to Carnes line of humidification equipment. Carnes’ electronically controlled steam humidifiers use ordinary untreated tap water and convert it to mineral free steam for humidity control in commercial, industrial and institutional settings.

One of the company’s innovations is to use disposable cylinders in its humidifiers, which makes maintenance much easier. Its unit has a capacity of up to 200 pounds of steam per hour. Carnes’ microprocessor-controlled steam humidifiers, introduces in 2001, feature LCD displays as well as LED’s for diagnostics. The steam humidifier also is marketed to libraries and museums, photo processing labs, printing plants and textile manufacturing – anywhere that needs additional humidity.

“Once again we were the first in the industry,” Stankevich said. “People look at us as a totally integrated supplier. There’s no other company that offers balanced systems of ventilation, registers and grilles, variable air volume control, energy recovery and humidification, all from a single source!”

Carnes’ main ventilation products are aluminum centrifugal fans that are typically found on the roofs of buildings. Other inline fans are mounted in walls and ceiling. Some of its ventilation products are for specialty clients such as restaurants. The company also makes axial flow fans as well as louvers, penthouses and gravity hoods. Carnes partners with companies such as Rockwell Automation and Allen-Bradley to integrate variable drive technology into its air movement and ventilation products, offering a complete solution to the building owner.

Stankevich said that Carnes and the company’s general manager, Greg Cichon, are looking to double company sales over the next five years, and have several strategies for doing that.

“Number one is expanding our humidification product group with our quiet technology,” he said. “Number two is redesigning our ventilation products to focus on energy efficiency and number three is reorganization and expansion of our distribution system.”

Indeed, in an era of rising energy costs and growing concern about air quality, the demands of the 21st century are likely to create a greater need for Carnes’ products than any time before. And there is little doubt the Wisconsin company will meet that growing demand – even if it has to do it one piece at a time.