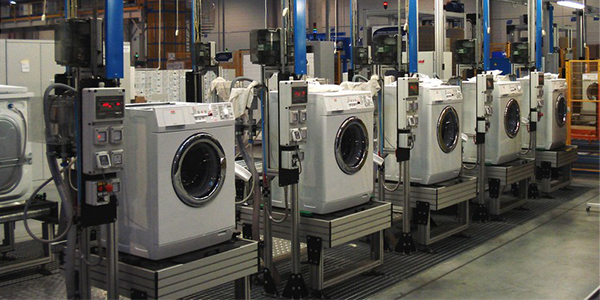 In its nearly 80 years of existence, The ELX Group of Wichita Falls, Texas, has established itself, truly, as The Laundry Professionals, as the company’s Web site proclaims. ELX’s high-powered washers/extractors, dryers, micro-contamination machines, denim processing machines, lint collectors, conveyors, folders and stackers are now found in a variety of industrial applications. With its most recent product introductions, especially the Family Product Line of washers/extractors, the company has also been stretching its business beyond merely washing clothes. It now stands firmly established as a provider of flexible solutions to a variety of industrial laundry needs, including total plant automation and data management products.

Inventing the Standard
ELX represents the uniting of two firms, Washex and Challenge, whose product innovation efforts carried them to leadership in the industrial washer and dryer markets, respectively. Washex was created when Abe Traube, the operator of a large wholesale and industrial dry-cleaning plant, decided that a large washer/extractor, produced as a combination machine, could save labor and reduce floor space. In 1923, Traube placed the first Washex machine in his own plant.

Over the next 30 years, Washex machines grew to become the industry standard; by the 1950s, they were being used by most of the large dry-cleaning plants in the nation. But Washex was by no means resting on its laurels; at that time, it developed the Floataire® suspension system — a program that gained acceptance almost immediately because it used air bags rather than hydraulic shocks, thus reducing suspension system maintenance and reducing the need for a heavy machine foundation. This new technology also permitted the installation of washers/ extractors even on upper floors of plants.

Also during the 1950s, The Cook Company, a maker of industrial dryers, merged with Challenge Inc., which produced concrete mixers. The new firm, Challenge-Cook Bros., began marketing the Challenge-Cook dryer, which quickly became the choice for dryers among many industrial customers.

Nineteen eighty-nine proved to be a ground-breaking year for Challenge. That was the year when the company offered its first dryer with the patented Geyseric™ burner, a dual-shelled, stainless-steel burner that increased the efficiency of the dryers to beyond what any of the competition offered. So effective is Geyseric™ burners that they are still used on ELX’s dryers today, a quarter of a century after their first appearance. This is a remarkable example of staying power in an age in which new technologies, no matter what the industry, are overturned by still newer technologies in what seems like a matter of minutes.

But this wasn’t the end of innovation for Challenge. In that same year, the company’s dryers began offering Axial Airflow, a feature that enabled the dryers’ production ratings to increase by flowing air directly into the tumbling laundry. In 1989, the newly introduced Pacesetter dryer established a new standard by offering the Geyseric™ burner, Axial Airflow and microprocessor control with a humidity sensor. Meanwhile, Washex was hardly standing still in product innovation. In 1981, it introduced the Washex large open-pocket washer/extractor, the first of a large program of open-pocket machines. This line has seen gradual improvements during the last 10 years, including microprocessor control, single motor drive, variable wash speeds and the Dry Zone Bearing and Quick Seal Replacement technologies.

The Perfect Marriage
In 1991, Washex and Challenge merged to become The ELX Group. In the decade that has followed, ELX has continued the innovation culture of its two founding companies. One key and inevitable development in the 1990s was the debut of ELX Flex systems, which united Washex and Challenge models to produce fully integrated automated washing/drying systems. These systems can be found in laundries and sophisticated apparel processing facilities around the world.

Along with creativity, ELX has become synonymous with quality. After the merger took place, ELX became the first U.S.-based laundry equipment manufacturer to attain ISO 9001 quality certification, which was granted based on the design and manufacture of its products. The company also put in place demand-flow manufacturing techniques, which have both improved efficiencies and decreased delivery times.

Product innovation wedded to quality manufacturing continues to be ELX’s mission as it faces the challenges of a highly competitive market. An example of this is the company’s recently launched Family Product Line, based on the modular approach — using the same components throughout the product range to create a product exactly to a customer’s specifications. “We have emphasized modularity with a family approach to our new development that includes shared components throughout the product range,” says David J. Smith, ELX’s administrative sales manager. The modular construction approach “gives us efficiencies of manufacturing, more common shelf components and common replacement-maintenance items for the customer,” Smith adds.

ELX’s Family Product Line is an example of what the company can do with modular construction. The Family Product Line can be adapted in mix-and-match applications that can fit any existing facility; plus, they have integrated the proven Washex technology to provide the performance ELX’s customers have come to expect from this brand.

Modularity is also a prime selling point for the Elite and Elite II lines of micro-controllers. The design for this new program includes program display available in various languages, the capability for both 128 different programmable formulas and for optional network interface. The Elite II and the Floataire® system can be found on the FVS 1200, a recent ELX washer/extractor introduction that also offers a single-motor drive system, giving variable-speed wash and extract functions.

The Vendor Factor
In developing its products, ELX places great emphasis on working with its vendors. Smith says, “We have worked with our suppliers during the development phase (of new products), so that the vendors uses their own expertise with the application of their products into our designs.”

As an example of how ELX serves its customers, Smith tells the following story: “One major current contract is a large English prison project that encompassed a number of prison laundries. With our factory efficiencies and quick delivery ability, we were able to meet the stringent machine specifications and delivery requirements for the project.”

Although ELX has already proved itself as the standard for manufacturing efficiency, last year the company moved to improve even in this area. It announced the consolidation of its Challenge factory in Bryan, Ohio, with its Washex facility in its headquarters location of Wichita Falls. As the company explains, this consolidation will provide “one resource for your laundry equipment needs offering efficient and cost-effective advantages for all your applications.” ELX’s manufacturing space now encompasses 125,000 square feet; plus, it boasts a 34,000-square-foot warehouse and 12,000 square feet of offices.

For a manufacturer that has established itself as a constant innovator, the future offers more of the same. Smith says a new, larger-capacity washer/extractor is in the works, which will handle up to 3,000 pounds per hour. In spite of the wonder that such a number creates, one suspects that ELX — with its rich history of creativity and invention — isn’t going to stop there.

Are You Set Up for Additive Manufacturing Success? 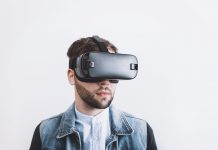 Industries Set to Explode by 2030 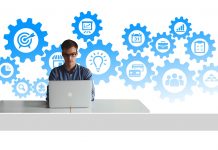 6 Start-Up Companies on the Rise