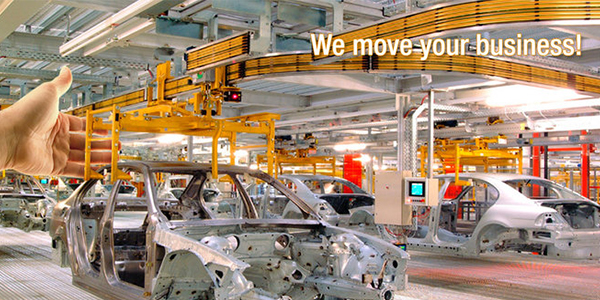 Ever wonder how power gets to the massive container shipping cranes at the nation’s ports; to amusement park rides, factory power tools, cranes and transfer cars in an iron or steel mill, or to far flung transit systems? Insul-8 Corporation has been answering these questions for more than 50 years.

Named for its innovative, insulated “Figure 8-Bar” conductor bar, Insul-8 Corporation supplies power from stationary sources to mobile systems in applications ranging from material handling to mass transit, water treatment, even theater stage lighting – anywhere that power needs to be conducted safely, efficiently, and reliably. More than 20 million meters of the company’s contact conductors and tens of thousands of collecting devices are installed throughout the world today.

“The Insul-8 conductor bar is used in the majority of overhead cranes in existence in North America,” says President Lon Miller. “We’ve supplied equipment for various projects including airport people movers, such as the Newark Liberty International Airport monorail, the Disney World monorail, and Las Vegas monorail projects. Large transit systems such as those in Vancouver, Bangkok, and Kuala Lumpur are an excellent market for us with tremendous growth potential.”

Other high profile projects include the 2002 Winter Olympics in Salt Lake City, where the company’s conductor bar powered the unique camera apparatus that kept pace with speed skaters racing around the oval and fed back video signals. Another customer is the U.S. military, which uses a conductor bar for its tank target range.

In addition to the company’s namesake conductor bar, Insul-8 Corporation also engineers and manufactures cable reels, slip rings, and festoon systems to get power where it needs to be, and push button pendants and radios to provide control. “A customer could select among several of our solutions: A small hoist on a monorail could be powered with bar, festoon or a reel depending on the requirements,” says Keith Forman, division manager in the company’s Harlan, Iowa plant. “We have complementary but also somewhat overlapping products to give customers a choice. We provide the whole range of electrification as opposed to some of our competitors who do well in one or two product lines. So we’re not advocating what we sell. We are advocating what the customer needs.”

“That’s where our breadth of product knowledge enables us to do whatever is needed for that particular application,” stresses Division Manager Don Jones. “Some customers want us to provide control boxes and a full turnkey system while others want just the reel or the ring to integrate into their system.”

A Nice Splice
The company got its start with the merger of two industrial electric innovators: Industrial Electric Reels (IER) and Insul-8.

IER began in 1924 as Industrial Electric Works, an electrical contractor based in Omaha, Neb. After World War II, the company pioneered the development of cable reeling devices and slip rings. Its reputation spread as a quality manufacturer of reels ranging from small commercial duty reels to large, custom-built reels for the most demanding applications such as container cranes, stacker/reclaimers and bulk material ship unloaders and loaders.

In 1944, Insul-8 was founded in San Carlos, Calif., where it produced conductor bar and cable festoons. In this way, the two companies had separate but complementary expertise in mobile electrification systems. Insul-8 and IER became part of the Delachaux Group in 1975. In 1991, Insul-8 moved to Harlan, Iowa, about 50 miles east of Omaha and the companies began to merge some business and engineering functions. The team officially became one company on Dec. 31, 1996 and remains under the privately owned French parent.

“Industrial Electric Reels was the first to introduce powered and motor-driven cable reels used for cranes and also a host of different applications such as power supply in a factory if hung from a ceiling,” Miller says of the company’s heritage. “On the other side, Insul-8 was the first to introduce a rigid conductor bar to the market place for overhead cranes.”
The company had notched another first in the early 1970s, when Insul-8 introduced its stainless steel covered aluminum conductor bar. “Aluminum is a very good conductor of electricity, but the surface is soft. By adding the stainless steel cap you get a lot of wearability to withstand the graphite shoe that runs along the track and picks up the power from the bar,” notes Marketing Director Rod Griffith.

About eight years ago, the current Insul-8 Corporation launched its “finger safe” Safe Lec 2 conductor rail, which is the product of choice in overhead cranes installed today. Many major ports in the United States use Insul-8 Corporation’s aluminum/stainless steel contact conductors to power its container cranes for dependability under the most severe conditions.

Which of the company’s core technologies are installed depends largely on the port’s location. West Coast ports in Los Angeles, Long Beach, Seattle and others use the Insul-8 power bar buss; many Southern and East coast ports rely on the company’s cable reels.

“In addition to the usual safety factors, we have a reputation for being very robust and reliable in this high demand application,” Forman says of the conductor bar. “When you have a container ship come in with 800 to 2,000 containers, every minute that ship is not moving is costing them money. So it is absolutely essential that the cranes unload the containers as quickly as possible and get the ship back into service. They need to have systems that are highly reliable and our buss systems have been proven very effective.”

The transit industry provides another lesson in reliability. “They have exceedingly high requirements for the system to withstand electrical shock load and very high current demand, yet make sure it doesn’t melt and shut down the transit system and need be repaired. Those are the case situations that we design for,” Forman says. (New York City may be a future potential customer as it fixes a recent catastrophic fire disabling key subway lines and also needs to replace old conductor rails.)

Power Bars Insul-8 Corporation has two production facilities. The Omaha factory and headquarters includes about 42,000 square feet of production space along with offices. To accommodate the dimensions of conductor rail production, the Harlan, Iowa facility measures about 100,000 square feet.

The company also has subsidiaries in Australia, Canada and the U.K., and a distribution warehouse in Mexico. China is another market – the company recently supplied its cable reels to Guangzho Airport, overcoming the challenge of rolling brownouts and erratic power supply to the region.

“Our niche is being able to provide a breadth and depth of product from a small table-top slip ring to a huge slip ring. We arrange our manufacturing to turn over a high quality and high variety of components in mass customization,” Jones says. “In the real estate business they talk about location, location, location but here we pay attention to application, application, application,” he adds. “Our engineers talk to the customers’ engineers to make sure we have a product that meets their needs.”

“It’s really important to think about this in terms of a spectrum,” suggests Forman. “At one end we have off-the-shelf, stocked products and for others we do a prototype, evaluations, and development. In the extreme we are making a ‘snowflake’ that’s a one of a kind.”

The company’s sophisticated engineering effort is greatly enhanced by computer and Internet technologies connecting design to customer needs. Insul-8 Corporation uses state-of-the-art engineering software that supports 3-D modeling and rapid prototype production. “It’s one thing to draw a piece, it’s another thing to have a rendering of that in your hands,” Forman says. To take full advantage of 3-D design software, the company sends an electronic engineering file over the Internet to a vendor who renders the design in solid form in only a few days. “This significantly speeds the design process and enables us to get effective solutions to the customer.”

Several other Internet-based, proprietary programs further support customer interface with the company. One is a “Quick Quote” program that customers use not only to identify products for purchase but also to develop quotes for their customers.

“When a crane builder is quoting a new crane to a customer, a central part of that quote is the electrification,” Miller explains. “So our customer can go to the program, identify exactly the products they need, get the technical data to support that proposal, and put it right into the quote for their customer. If it turns into an order for them, it can turn it into an order for us at the touch of a button.”

Another program is a password-protected Web site for customers to enter orders directly into Insul-8 Corporation’s system, and to check the status of the order and track shipping. At any time the sales force can also go online to research customer histories and correspondence.

In addition to its customer service technologies and core electrical bar, cable, and other offerings, Insul-8 also continues to add new products. For example, it recently launched a line of wireless industrial radio controls incorporating the latest advancements in RF and microprocessor design.

“We have growth potential both in terms of expanding our market share with all the tools we talked about, but also adding complementary products,” Miller says. “You can imagine, with the broad range of our products, there is a tremendous amount of ancillary products that we can introduce to the market. So we feel there is still plenty of growth potential for us to go after.” Citing a steady growth rate of about 4 percent per year over the last five years, he adds, “Clearly there’s a concern in the U.S. about the decline of manufacturing, but that rhetoric has been around for 20 years and manufacturing continues to be very strong.”