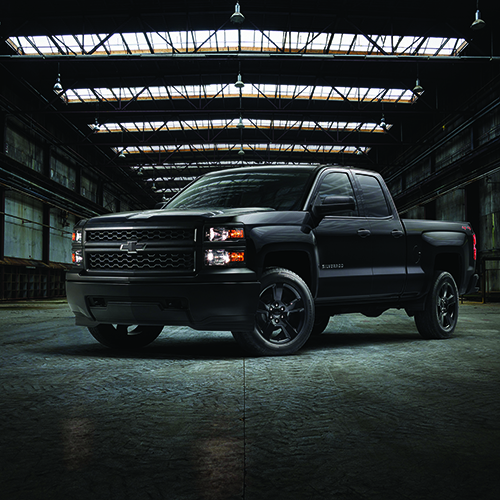 What’s the largest and most profitable segment for all five North American vehicle manufacturers? Full-size trucks. (The other two largest are compact SUVs and mid-size cars.) Consequently, there’s a lot of tough competition for market share. Chevrolet Silverado—named the 2014 North American Truck of the Year by a panel of 50 automotive journalists, as well as the Highest Ranked Light Duty Pickup in Initial Quality by J.D. Power in 2015—blazes the competitive trail by delivering what truck owners look for in a vehicle used for both rugged work and rugged pleasure. As Car & Driver put it, “In a changing large-truck market, the Silverado has evolved like a rock; it’s a geological commodity meticulously polished by time. In focusing on the fundamentals, Chevrolet passed on the latest trends but delivered a pragmatic truck that gets the core attributes right.”

“It’s an interesting market segment,” notes Tom Wilkinson, communications manager for Chevy trucks. “MSRP can range from the mid-$20,000 for a basic two-wheel drive pickup all the way up to the luxury end of over $60,000. In comparison to our competition, we all are pretty much at similar price points. Our customers know exactly what they are looking for, how much they want to spend to get what they want, and aggressively negotiate with dealers to get it.”

So how does Chevrolet differentiate itself from other manufacturers offering roughly equivalently equipped and capable trucks with comparable pricing to such savvy customers?

“Chevy is, of course, a well-established brand, particularly in trucks,” Wilkerson points out. The 1936 Suburban was a forerunner of today’s SUV (as well as one the longest-lived, continuous production automotive nameplate in the United States). The 1948 Chevrolet Pickup was a restyled version of the highly dependable trucks used during World War II, not to mention farmers and tradespeople, aimed not only for commercial use but as a second family (the redesign featured a roomier cab with three-across seating).

Perhaps most significantly, Chevy’s 1955 small block V8 engine serves as the fundamental model that continues to drive today’s trucks, albeit with an assortment of modern technologies. “It’s still most popular engine in motor sports as well as for commercial use,” Wilkinson says. “Today we have our world-class Eco-Tec3 engines in both V6 and V8 versions that feature sophisticated direct fuel injection, active fuel management (which deactivates cylinders to run in 4 cylinder mode when full power isn’t needed) and variable valve timing that creates high torque (the V6 in fact offers the most torque of any engine in its class). No other competitor features these three technologies standard on every engine. And it’s all based on that original 1955 engine block.”

Chevy Loyalty
Such longevity inspires long-term loyalty. Indeed, Wilkinson says truck owners tend to be brand devotees down through the generations. “It’s not just that someone is a Chevy guy,” he says, “but that entire families are Chevy owners. And that someone buys Chevy trucks because his father always bought Chevys, as did his father’s father.”

That said, truck buyers can be as tough as their vehicles. Regardless of what’s on the nameplate, they are, as Wilkinson puts it, both highly knowledgeable and highly emotional when it comes to trucks.

“Trucks are used primarily for commercial and recreational use. While there is a small luxury end segment, for the most part our customers are business people who are stretching their budgets to get a vehicle they need for everyday use in rugged environments. And every day is every day. The truck they are using for work five, six days a week is the same vehicle they use on their weekends to go hunting or fishing, to tow a boat or a camper. And they expect that vehicle to work just as well after 200,000 miles or so as the day they bought it,” he says. “Our customers know exactly what they want and our job is to provide the exact vehicle that will do it for them.”

Which is where the Silverado comes in. Originally a trim level for its predecessor platform, the Chevrolet C/K, it was launched in 1999 as a light duty truck, and later developed heavy-duty models. Silverado is manufactured at various Chevrolet plants in Arlington, Texas, Flint, Mich., and Roanoke, Indiana, as well as Silao, Mexico. Full-size models are primarily sold in North America and Mexico; there’s also a small market in the Middle East. “The Silverado is too high to get into and too expensive for the global market,” Wilkinson says. “Mid-sized trucks, such as the Chevy Colorado, are better
fits to other parts of the world such as Africa, the Middle East, South America and Asia.”

Silverado is sold both through fleet and dealer channels. “We offer everything from a very basic pickup all the way to a luxury class, although that’s more the market for our sister GM Sierra truck. Most of our sales fall somewhere in-between.”

Regardless of what trim package and options customers prefer, the primary concern of customers is durability. Wilkinson says that, “A truck customer typically holds onto their vehicle for a long time. And they use it in hard conditions, for towing, for hauling, for off road. In fact, about two-third of the trucks we sell are 4-wheel drive. That’s why Silverado owners appreciate our commitment to a high-strength roll-formed steel frame. There’s a place for aluminum to help make a vehicle lighter and more fuel efficient, but it’s not in the frame of a hard working vehicle that is frequently driven in rural areas with rough roads.”

He adds that, “A truck is both a tool and a lifestyle. Which is why the distinction between vehicles used for work and vehicles used for recreation tend to blur. A large portion of our customers are small businesspeople who need a truck for their work. At the same time, they need a truck for weekends when they go camping or boating on the lake. A truck isn’t just a vehicle for our customers, it’s part of their identity. The Silverado helps customers realize their ambitions on the job, and then helps them get where they like to go to relax and enjoy the fruits of their labor.”

What’s up for 2016 and Beyond
2014 marked the third generation of the Silverado platform. 2015 introduced numerous refinements including a number of advanced in-vehicle communications capabilities, in particular a Wi-Fi hotspot. Next year, in 2016, Chevy is adding Apple CarPlay and Google Maps as additional technologies.

“Truck owners tend to be conservative, by which I don’t mean politics so much as that they tend to stick to basics,” Wilkinson says. “So you might think that these kind of so-called infotainment systems are more something for Millennials and cars in cute colors than your average truck driver. Actually, though, they are the most eager and earlier adopters. Again, it’s because these are work vehicles. People love the mobile Wi-Fi because this way they can be out on a job and instead of having to use their phone to call in and order or get some information, they can just do it more efficiently from a laptop or tablet. And integrating Google Maps into the dashboard is not only convenient for them to find a work site, it’s also great for them to know where they are when they’re off-road looking for a camp site. It’s not about being able to get on Facebook, it’s about having the modern tools you need to run your business. That you’re able to stream Spotify, as well, makes riding out to the job all the more pleasurable.”

Looking down the road, how will the Silverado and trucks in general continue to evolve. “Although trucks have different regulatory standards to satisfy, just like cars we’re always looking at ways to improve fuel economy. Our active fuel management technology is just one example. Also, while you wouldn’t think this would apply to a truck, we do a lot of wind tunnel studies to improve vehicle aerodynamics. We also spend a lot of time listening to our customers, what they’re looking for in a truck that we can provide. In fact the Silverado redesign was intended to address customer needs for a better powertrain and more efficient transmission.”

While there have been some experimentations with hybrid engines, Wilkinson says, “Our customers weren’t really interested, and it turned out that hybrids in trucks really didn’t really achieve any sufficient gains in fuel economy. Maybe in 10 or 20 years, but we’re not looking in that direction for the immediate future.”

And, sometimes, you never know. “When the crew cab came out with four doors and a back seat, people thought it was an extrava-gance or a gimmick, it wasn’t a ‘real’ truck” Wilkinson says. “But, you know, that extra space in the back proved to provide some valuable real estate, for people or cargo. You can go to work and still pick up the kids from school on the way home. Today, two-thirds of trucks sold are crew cabs.”

He adds, “Truck owners are a special breed and we think that the Silverado is just the special breed that a truck owner wants to drive, with the capabilities they need for both work and for pleasure.”