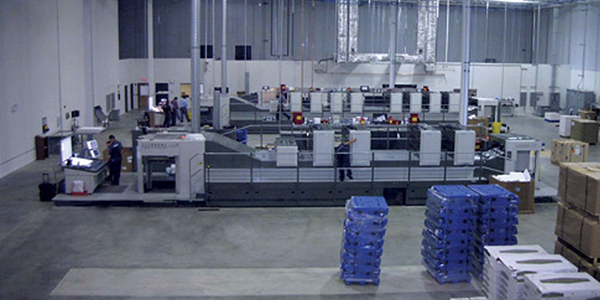 Like clockwork every Tuesday, music and video retailers everywhere in the country have the latest batch of CDs and DVDs on their shelves ready for purchase by eagerly awaiting fans. Similarly, when the latest video game or computer software is released, stores are fully stocked to ensure consumers can buy the product the first day it comes out. All of these products come in attractive packaging, but the actual content is digitized on optical media.

More than likely, the reason you’re able to unwrap a CD or DVD or computer game on its release date and enjoy flawless playing is because of a company with European roots based in Weaverville, N.C. While the name of the town undoubtedly derives from the textile operations popular in the South, this company spins images and sounds woven in bits and bytes.

Sonopress is part of the Bertelsmann
AG family, one of the largest international entertainment corporations. As part of Bertelsmann’s $3.5 billion Media Services Division, Sonopress has global operations throughout Europe, North and South America, Asia and Africa. The Weaverville operation serves North America, home to the world’s major entertainment producers and media publishers.

With over 40 years’ experience in media manufacturing, packaging and supply chain solutions, Sonopress is the popular choice for leading music, video, computer game and software companies, including Microsoft, Disney Interactive, Toshiba, Atari, Electronic Arts, UbiSoft, and Nintendo. Sonopress also manufactures half of the Microsoft Xbox video games sold in the U.S. And while it helps to be owned by Bertelsmann, which operates BMG Music and Random House among others, Sonopress’ success in the market is due less to family connections than its ability to minimize time-to-market.

Time-to-Market
Said Per Save, Vice President of Sales and Marketing, “The competitive edge isn’t price so much as the ability to get product on the shelf when it needs to be there, and to reduce the time it takes to get there. In this business, products have fixed release dates, and if our clients can’t deliver to retailers on time, they pay a fine. Of course, just being fast isn’t enough. You have to deliver a quality product.”

How does Sonopress ensure that haste doesn’t result in waste? For starters, it helps to be the largest CD optical replication facility in North America, which the company has achieved by constant increases in optical media capacity by building additional production capacity to the Weaverville facility, originally bought from RCA in 1984. A nearby 122,000-square-foot facility in Duncan, S.C. provides manual product assembly.

Current manufacturing capabilities include a 410,000-square-foot facility that produces 500,000 DVDs and 1,180,000 CDs daily. But once produced, these have to be packaged, which includes everything from shrink-wrapping a CD jewel case to packaging a retail display box, to making sure a price or promotional sticker is precisely placed. “On a full day, we produce as much as 1.5 million packages,” said Save.

While much of the production is automated, Sonopress does employ a workforce of 730 full-time employees and up to 1,800 temporary employees during production peaks, mostly between September and November, during the Christmas season when Sonopress does 60 percent of its business.

IT Systems Speed Efficiencies
Key to the efficiency of this system is an SAP information management system that speeds production, streamlines materials handling and distribution, and maintains efficient inventory control. Sonopress clients can also upload graphics, CD and DVD images from anywhere in the world directly to the production process.

Speed is critical, but quality is essential. Automated systems provide stringent quality checks throughout the production and packaging. Once the digitized content has been mastered onto the right media and packaged, the next critical stage is distribution. Here Sonopress teams with the Ditan Corporation, a distribution and logistics services company that maintains warehousing and shipping within the Sonopress facilities, to move product out of the manufacturing facilities to the retailer displays. Again, efficient automation is what makes the difference in reducing a process that traditionally took several weeks down to three to five days.

It also improves the publisher’s bottom-line. For example, Ubi Soft Entertainment publishes interactive entertainment software, including MYST(r) III: Exile and Tom Clancy’s Splinter Cell for Xbox. Whenever finished units cross from Sonopress production into Ditan’s warehouse, they are prepared for immediate shipment – and Ubi Soft can immediately bill the inventory.

Not only does this get product to market quicker, it speeds up Ubi Soft’s accounting cycle to bill more efficiently and reduce receivables time.

Another neat feature is an on-line service called FindMyProduct.com that allows customers to view and analyze real-time project status, manufacturing and distribution orders, inventory and delivery status. Jason Horstman, director of sales operations for game maker LucasArts, testifies to the effectiveness of such “smart manufacturing” systems. “We chose to work with Sonopress because they understand our priority is to optimize value in every aspect of manufacturing and supply chain management. While we are always looking for ways to make the manufacturing and replication of our games cheaper, we are more focused on making it smarter. Working with an expert manufacturing company like Sonopress enables LucasArts to level the playing field with our largest competitors so we can focus on what we do best – making high quality games.”

While such synergetic integration into the operations of content publishers offers a competitive advantage, there is the downside that Sonopress is perhaps too tied in to the fortunes of publishers. While conceding this as the nature of the business, Save not only sees future opportunities for growth, but also adds that the company is gearing up for expected ramp-ups in production.

Expanding Opportunities
“The recorded music industry is beginning to come out if its slump,” Save remarks, “and I am cautiously optimistic this trend will continue for a number of reasons. Publishers are worrying less about copyright protection, which has been relatively ineffective, and more about producing a better product. I think the slump has forced record companies to improve CD content with more features such as added songs and bonus videos that you can’t get from illegally downloading songs. Moreover, pricing has leveled out. There’s been a drop in the market price for CDs so that now you can buy a disc full of songs at about the same price if you were to download them, and at better fidelity in a better package.”

Another factor is the growth of DVD players in what used to be unusual locations. “You’re seeing more and more DVD screens in the back of not only minivans, but in luxury models such as BMW, Lexus and Cadillac. Car manufacturers are also putting operator manuals on discs instead of bound in paper. I think we’re going to see a lot more DVDs in new car models. The game sector is also growing 6 to 10 percent annually. In addition, it looks as if the U.S. economy is finally beginning to pick up. We’re not expecting anything like the boom times of a few years ago, but current projections are for steady long-term growth.”

All of this means that Sonopress is planning for expansion. “We’re looking to grow 20 percent a year,” Save notes. “To get ready for that, we’ve already begun looking to enlarge our current production capacity so that when the orders come in, we’re ready for them. Again, the key thing here is provide the customer with the utmost speed at the highest quality with the greatest efficiency.”