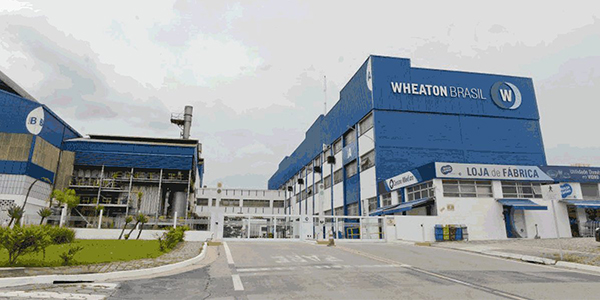 In 1952, when Wheaton Brasil installed its one furnace factory in São Paulo, it was as an affiliate of the New Jersey-based Wheaton Company, the leading glass and ceramics manufacturer that had been operating in the United States since 1888. Founder T.C. Wheaton’s son, Frank Wheaton Senior, was a great innovator who, following World War II, was the first to launch penicillin bottled in liquid form. In fact, it was his desire to introduce penicillin to the Brazilian market that led to Wheaton do Brasil’s founding in 1952. Prior to the company’s arrival, penicillin, available only as a powder, had been a scarce commodity. In its liquid form, however, it could be produced on a large industrial scale – making it widely accessible to consumers and highly profitable for those who manufactured and packaged it.

During its first decades in Brazil, the pharmaceutical sector comprised Wheaton’s biggest customer base. And despite the fact that glass has been gradually replaced by alternative packaging materials, increasing concern with safety and health issues, it continues to have staying power. Says Wheaton Brasil’s marketing manager Marta Bagolin: “Glass functions as a barrier, offering complete protection for pharmaceutical products. Although newer materials are lighter, its intrinsic characteristics still make it a favorite because it is so dependable.”

Today, the pharmaceutical sector still constitutes an important marketplace for Wheaton, as do certain segments of the food and beverage sector. It also has a popular line of low-priced tableware. However, in recent years, its most lucrative market – currently responsible for half of all its production – is rapidly expanding perfume and cosmetic sector.

Brazil’s Cosmetic Boom
Says Renato Massara, Wheaton’s commercial director: “The Brazilian cosmetic sector has experienced real growth, not just here but internationally as well. Last year alone, there was a 25 percent increase in exports of cosmetics. Major manufacturers such as Boticário and Natura – both of whom are clients – are making headway in foreign markets and as they grow, we grow along with them. For instance, right now there are around 30 new projects a month being launched in Brazil’s cosmetic market. Natura has the most modern plant in the world. And Avon Brasil, (also a client), boasts sales volumes equal to those of Avon in the U.S.”

In response to this promising trend, three years ago Wheaton decided to break into the export market on its own. It began making inroads in Latin American and American markets and by 2006, exports already made up 13 percent of all of its sales. Despite the sharp valorization of the Brazilian real in relation to the U.S. dollar, the company hopes to boost that number to 20 percent. Says Massara: “The currency crisis has made it difficult. We have to work hard to reduce our costs. In fact, we’re not earning money with exports now. Instead, we see this as investment. We want to enter these markets in order to stay in them. As a Third World country, particularly when you are trying to break in the U.S. and European markets, you really have to prove that you’re the best.”

Having been in operation for over half a century in Brazil has given Wheaton an enviable reputation for longstanding quality and dependability Landing and keeping big-name clients has been the result of constant change and adaptability. In the 1990s, the company was nationalized, becoming 100 percent Brazilian, which gave it easier access to financing. During this decade, it also enlarged and modernized its 2,100,000-square-foot facility in São Bernardo do Campo, on the outskirts of São Paulo. It made major investments in technology including electronic-command systems and semi-automatic machinery, clean stations (for the pharmaceutical line), positive-pressure rooms, and state-of-the-art oxy-fuel combustion furnaces, with complete control of particle emissions. Such innovations improved the production process significantly, allowing for greater control of the fabrication process and of inventory, better use of energy, diminished production time, and the possibility of creating highly distinctive products that satisfied the needs of the most diverse niches of the cosmetics market.

Says Marta Bagolin: “Increasingly, clients are looking for packaging solutions that are exclusive. These aren’t generic containers that sit on shelves. We make Avon containers that are only for Avon. Our Natura packaging is produced expressly for Natura. In this market, you have to be very sensitive – and very quick as well. These days, products’ shelf lives are shorter: most need to be redesigned after two years. For this reason, our partnership with our clients is of a consultative nature. We understand their brand and the positioning of their products. We help them develop their concept and then analyze the technical viability of carrying it out.”

Finishing Touches
Bagolin emphasizes that Wheaton’s priority is to be able to offer the most complete solution possible. For this reason, it started its own decorating and finishing company, Wheaton Decor, and in 2006, it spent $4 million to acquire Megaplast’s glass painting division. The decision to expand into decoration was a strategic move that gave the company great leverage. It has also paid off handsomely: Last year Wheaton grew by an impressive 50 percent in the cosmetic segment (and 13 percent overall). Explains Renato Massare: “We are one of the few glass packaging manufacturers in the world, within our sector, equipped to do design and decoration and this is a big plus in this market. Other manufacturers are more focused on the bottle and drink market, not on cosmetics. Our differentiating strategy is the wide range of services we offer. While most of our competitors outsource, we have marketing and technical teams that work on each project from beginning to end.”

Indeed, Wheaton Decor boasts 31 semi-automatic lines along with three silk screen lines, five paint lines, and three frosting lines, all of which are automatic. Aside from automatic adherent labeling, Wheaton can also assemble metal and plastic components, including caps. The presence of three-color feeders means that Wheaton is the only company in Brazil that can make its own colored glass. Painting and special decorations using organic and inorganic paints as well as gold and silver allow Wheaton’s artists to create personalized designs that emphasize beauty while bestowing uniqueness upon each product. Admits Bagolin: “In many cases – such as Calvin Klein’s different versions of cK one – a client will want identical flasks differentiated by variations in design. Our ability to create sophisticated design solutions that add value to the product gives us a competitive advantage. For instance, many of the shapes we make appear as if they were produced manually by artists, but in fact they are the result of large-scale industrialization. To achieve a handmade look using industrial means is a constant challenge for us.”

Total Flexibility
However, according to Bagolin, glass offers added value due simply to its inherent characteristics. “Would you buy perfume that wasn’t in a glass bottle?” asks Bagolin. “Glass is not just a container, but a precious and attractive object. Moreover, aside from being safe, it is 100 percent recyclable. It’s difficult to counterfeit since it’s hard to make an exact replicate of a mold.” On the subject of molds, Wheaton is one of the few in the industry in that it makes those too, as well as other machines and equipment, giving the group greater agility and control over the product, while cutting down on production time.

For instance, Saint Gobain in Brazil doesn’t make its own molds. It has no furnaces reserved exclusively for cosmetics and perfume bottles – (Wheaton currently has three and plans to spend $12 million for a fourth furnace that will be in operation by 2008) – nor does it have a decorating unit. In fact, Wheaton actually does decorating services for Saint Gobain. Meanwhile, having control over the entire production process gives Wheaton great flexibility, unmatched by its competitors. “Flexibility is the secret of our success,” confides Massara. “For instance, Avon recently asked us to produce 200,000 containers for its Anew (Renew in Brazil) line of facial creams, which are sold door-to-door. The products were so successful that within a month, Avon was asking us to produce a million more. Fortunately, we run our operations in a way that allows us to react very quickly to such situations.”

Marta Bagolin concurs, adding that flexibility is not just a result of technology and administration, but of motivation as well. “It helps that Wheaton is a company where there is a lot of passion involved in the making of our products. Working in a beauty segment adds a large degree of subjectivity to what we do. Our job is to translate designers’ ideas into an efficient business. In the end, we don’t just make products, we supply creative solutions and this is what makes us distinct.”