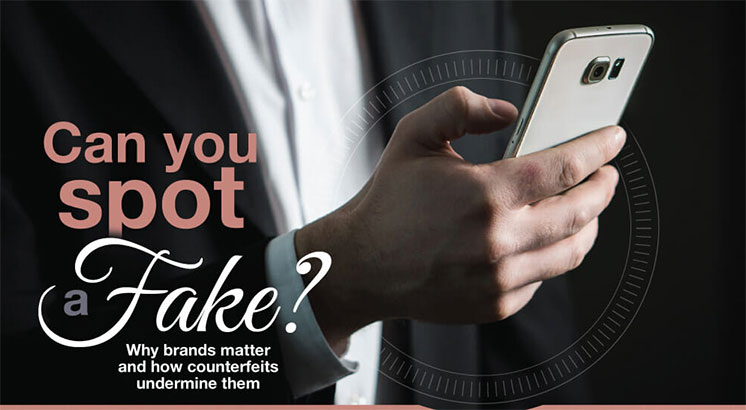 Counterfeits are a bigger problem than you may think. More than two in five supposedly brand name products purchased online are fake, and counterfeits cost the global economy a whopping $323 billion in 2018 alone. What’s more, counterfeit products can harm a brand’s reputation when consumers have a bad experience but don’t know the difference. Fighting back against counterfeits is harder than ever, but it’s a fight worth taking up.

Counterfeits Are A Big Reason Behind The Trade War With China

For years, American businesses have been sounding the alarm about Chinese manufacturers stealing their intellectual property to create their own versions of products. Many companies moved their manufacturing overseas to save money, only to discover the laws in China offer little protection against such theft.

Unfortunately the trade war is likely to make the counterfeiting problem worse instead of better. Tariffs are driving up the cost of genuine goods, and companies pass that additional cost on to consumers. This, ironically, drives the counterfeit market as consumers shop around for a lower price, often not knowing that what they are purchasing might not be genuine. Counterfeiters respond to the increase in demand by producing even more counterfeits, and the cycle goes on and on.

A 2016 study found that nearly all — 99% — of fake iPhone chargers failed safety testing, which can result in electrical shocks and even electrical fires. But electrical shocks and fires aren’t even the most dangerous outcome of counterfeiting. In developing countries, 10% of medical products, including medications, are counterfeit. Most people don’t know they have consumed counterfeit medication until they have a bad reaction, but even if you don’t have a bad reaction taking medication that isn’t doing what it’s supposed to do could lead to serious injury or even death.

The Problems With Counterfeits Include More Than Just Fake Merchandise

Counterfeits Are More Pervasive Than Ever

More than a quarter of consumers reported unknowingly purchasing counterfeit merchandise online, and those are just the ones who realized what they got was fake. You can see YouTube videos of fake iPhones next to the real deal that look very similar and actually function but cost 10% of the sticker price of the genuine article. Unless you were comparing them side by side, you might not notice a difference until there is an inevitable malfunction.

Some of the most commonly counterfeited items are makeup and skincare products as well as supplements and medications. There are also lots of counterfeit phone chargers, batteries, and accessories.

Fighting Back Against Counterfeiting

Brands should be doing everything they can to prevent counterfeit merchandise from entering the marketplace, especially since they are the ones whose reputations and intellectual property are on the line. Monitoring sites known to sell counterfeits is crucial, and blockchain can help provide authentication. Working with reputable manufacturers and selling through sites without third party sales can stem the tide of counterfeits flooding the market.

But consumers can also fight back against counterfeits, and it is often in their best interest to do so because of safety issues. Looking out for deals that are too good to be true is probably the single best way to avoid counterfeits, but things like reading reviews or noticing that there are no reviews can help, too. Look for things like misspellings in the item description, poor grammar, and asking questions of the seller can also give you an idea of whether they are legitimate or not.

Counterfeiting costs more than just lost intellectual property. It can actually destroy a business completely. Learn more about the real cost of counterfeits and why brands matter from the infographic below.

Brian Wallace is the Founder and President of NowSourcing, an industry leading infographic design agency, based in Louisville, KY and Cincinnati, OH which works with companies that range from startups to Fortune 500s. Brian also runs #LinkedInLocal events nationwide, hosts the Next Action Podcast, and has been named a Google Small Business Advisor for 2016-present.  Follow Brian Wallace on LinkedIn as well as Twitter.