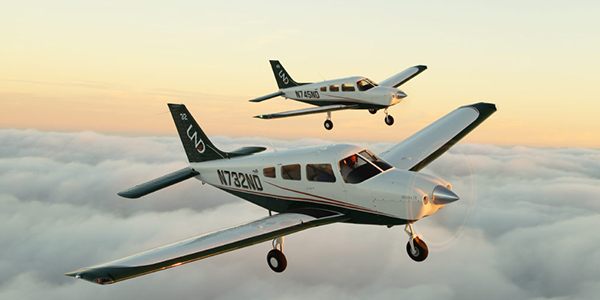 When terrorists struck at the United States on Sept. 11, 2001 with four hijacked commercial jetliners, the tragedy’s aftermath sent the nation’s general aviation industry into something of a tailspin.

Even though the hijackers had toppled the World Trade Center and struck the Pentagon with large passenger aircraft, the attack led to rules that for a time made it harder to fly small, private planes. All general aviation flights were grounded for more than two weeks after the attack. For a long time, certain airports or chunks of airspace were off-limits.

But as President John F. Kennedy once famously pointed out, the symbol in the Chinese language for crisis is a combination of “danger” and “opportunity.” At The New Piper Aircraft, Inc., where executives had revitalized the most famous name in general aviation in 1995, officials are now aggressively noting that the post Sept. 11 security rules have made business travel on small private aircraft more sensible than ever before.

The Vero Beach, Fla.-based company has launched a new print ad campaign that shows a scrunched, prone businessman about to go through an airport X-ray machine on a conveyor belt. The ad is headlined, “Do business without doing the baggage check. Now that’s freedom.” It notes that a private aircraft means avoiding “the nuisance and indignity of the baggage check, invasion of privacy and lack of control of your own schedule.”

‘Commercial aggravation’
“Our new ad campaign that’s coming out focuses on the aggravation of traveling commercially, which is a reality in this day and age,” said Chuck Suma, the company’s president and CEO. He noted that the need to arrive at an airport some two hours early for security checks, when coupled with the usual traffic jams and flight connections, could waste valuable hours. “Commercial aviation is always difficult, and unless you’re going to a major city nine times out of 10 it’s not a direct flight.”

The New Piper is better positioned than its rivals to take advantage of a rebound in commercial aviation. Although the legendary Piper Cub name has been retired, the firm is the only general aviation company that markets a plane on every level from trainers for student-pilots to its top-of-the-line Meridian turboprop.

The company’s innovative spirit carries on the legacy of the company’s storied founder, William T. Piper, who has been hailed as “the Henry Ford of aviation” because of his efforts to make private aviation more accessible to America’s middle class. Piper, who came out of the oil fields of northwestern Pennsylvania, worked with an upstart aircraft company that was selling a lightweight monoplane with a 20-horsepower engine. Piper and his engineer Walter Jamouneau developed the Piper Cub in 1937 and built about 10,000 of them before and during World War II.

After the war ended, the U.S. military encouraged the training of more private pilots, to be prepared for any future conflicts, and Piper – with its successful line of small starter planes – was well positioned to take advantage. The company’s strategy was to introduce new pilots on the Piper Cubs or its Cadets, and them move them up to more expensive Piper models. That strategy was highly successful, and in 1957 the firm relocated to Vero Beach seeking better weather for its test flights.

But the fortunes of all general aviation companies began to head south in the 1970s, with soaring fuel prices. Piper was bought and sold several times. But what really crippled both Piper and its competitors was the sharp rise in product-liability lawsuits, which allowed some people to file lawsuits over flight accidents that had taken place decades earlier. In 1992, the original Piper filed for bankruptcy.

However, Congress passed major legislation to limit these lawsuits in 1994, and so a group of new owners bought Piper and its Vero Beach production plant the following year. One critical move was to bring in Suma, who already had a long history with Piper – he started as a riveter and worked his way up – to run the new version.

Over the eight years since, Piper has worked to successfully reclaim its image as an across-the-board leader in general aviation. As in the past, the privately held company is successfully marketing its introductory trainer models to flight schools around the country. But The New Piper Aircraft, Inc. is also seeing increasing sales for its Meridian, a $1.75 million single-engine turboprop that is marketed to high-end business flyers.

This spring, The New Piper introduced two new aircraft models, the Piper 6X and the Piper 6XT, both high-tech refinements to its popular Saratoga II line. Company officials said that the fixed-gear design should appeal to insurance companies looking for safety features to hold the line on premiums.

Factory of the Future
However, the greatest innovation brought by The New Piper in its eight-year run may not be a particular aircraft but its revolutionary advances in production techniques. For decades, small aircraft were assembled in what became known as “the batch method,” which meant that manufacturers assembled large quantities of key components, then assembled them all at the same time in a hangar. One huge problem was that when a plane in the rear of the hangar was completed first, the other unfinished ones would have to be pulled out.

In 2001, the company switched over to what it calls the Factory of the Future which uses what it calls a “flow line” to construct all of its current models. As the planes move down the flow line, they stop in front of workers with the necessary parts and tools. When a blue light is turned on, the entire line moves forward.

The company has also made substantial improvements to its supply chain. In just two years, the Factory of the Future has been able to produce aircraft with fewer employees, fewer errors, and much less of an inventory backlog – marketed at a lower cost.

“The aviation industry was way behind the auto industry,” Suma said. “Now we have an assembly line, a painting line and a finishing line, and the lines are able to move the aircraft much more systematically.”

But the most important quality that The New Piper has demonstrated may be its flexibility. At the start of the decade, Suma has announced an ambitious Flight Plan 2005 to double the size of the company over five years, but it became clear that wasn’t possible. So The New Piper shifted gears and developed its Flight Plan Now – a 12-point plan aimed at bringing the company through turbulence and making sure that the most famous name in general aviation is flying high again.